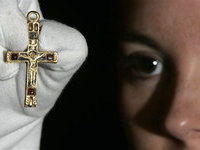 The only leader from the west who has lifted up a hand in defense of the Orthodox Christians in the Middle East is the Pope who had a meeting with Metropolitan Hilarion,  November 12th. Yet even he is not respected by the west. A comment to a previous article of mine was from someone in the US who said: "the Orthodox church is worse than the Catholics ".  Worse than the Catholics? Do Americans hate Christians? It is well known that most western leaders will do nothing to help Syrian Christians or other Christians in the Middle East.

"I believe that this is an issue (Christians persecuted in the Middle East) which is constantly marginalized or ignored by the Western mass media ..."  - Metropolitan Hilarion

President Putin has tried to instill law and order in the Middle East and some have proposed he get the Nobel Peace Prize for stopping Obama's war escalation in Syria. Unlike the west, Russia has come to help Christians by not only sending more ships, food and medical supplies to the Middle East but by also sending Russian Bishop Metropolitan Hilarion to Beirut recently where he said regarding the Arab Spring:

"What occurred was more of a foreign plan executed by external factions to control these countries, a plan that began with the Iraq war in 2003." As a result, "It was not democracy that prevailed in those countries, but utter and total chaos, the price of which was primarily paid by the Christian inhabitants of these countries, who were persecuted, killed and driven out."

The anti-Christian Obama has allied himself with Al-Qaeda rebels in Syria where 2 Bishops are still held captive, priests and other Christians are martyred. This is the "Hope and Change" he promised. Under Assad there was peace and a good economy for Christians but not anymore since the west has interfered. No peace for Egypt's Coptic Christians or in Libya either. Those who voted for Obama are held responsible as though they pulled the trigger or swung the blade to decapitate. It will go worse for those who are Christian leaders who ignore the martyrs of the East.  Why are they not at the White House everyday protesting to spare the Christians and stop the violence?

We are not Protestant so they ignore us. They turned a blind eye to the suffering church in Russia last century and they still ignore Christianity's rebirth in Russia. So, it is no surprise they do not support their Orthodox or Coptic brethren. They feel we do not worship the same God the same way so we do not deserve their empathy.  We are not true Christians they say. They thought differently long ago when the west formed a crusade to help the Eastern Christians. They won the first crusade and in the end it did help push back the Islamic tide of assault on Christianity. Today the very same west turns its back on the Orthodox Church and Coptic Christians in the East. They ally themselves with Muslims like Al-Qaeda to destroy us. The CIA even sends Muslim terrorists to Russia to kill us.

Remember what the Protestant minster Pastor Martin Niemöller said? "...they came for the Jews, and I didn't speak up, because I wasn't a Jew. Then they came for the Catholics, and I didn't speak up, because I was a Protestant. Then they came for me, and by that time there was no one left to speak up for me." Pastor Niemöller was sent to a concentration camp. He had believed Hitler's promises at first just as many believed Obama. Hitler broke every promise he gave at the beginning just like Obama. Hitler promised not to harm the Christians but he did. The Protestant churches were silent during the persecution and murders. Hindsight is 20/20. It is clear for many today that they would not do the same as Niemöller but in the 1930's Germany had much "Hope and Change". The same evil had yet to surface.

Do they fight for religious freedom in America? Is God in every public school? Does every military unit have a pastor or priest? Can everyone display the 10 Commandments and nativity scenes anywhere? Do they have religious parades in their cities like they did this month in St Petersburg, Russia? Are homosexuality and debauchery still sinful? Do they fast? Do they receive Holy Communion? Do their Bishops rebuke the sinful or excommunicate them as did Metropolitan Tikhon of Moscow when he said in 1917: "Come back to your senses, you madmen and stop spilling blood! What you are doing can please only Satan...I hereby call on the Orthodox faithful to rise in numbers and beat off the forces of evil that are besieging the Church on all sides."

I saw them that had overcome the Beast in Russia. Americans have yet to do so. We Orthodox Christians ask the western Christian leaders:  dost thou betray the Son of man with a kiss? Do you give lip service to God by singing and dancing in your theaters of worship on Sunday? Does history repeat itself? Do you care little today for those who are tortured and killed for their faith as you did when Russians were martyred by the communists? If so, in the future you will one day say, "Then they came for the Orthodox, and I didn't speak up, because I was a Protestant. Then they came for me, and by that time there was no one left to speak up for me."