Is President Obama 'man enough' to tell the truth? 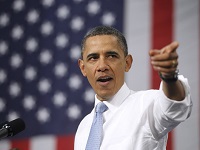 It used to be a saying in the United States, is somebody "man enough" to do what is right. You have to realize, that Edward Snowden is "already" moving congress around. They tried to unfund the NSA a little. Furthermore, there are congressmen and senators that want to investigate and also regulated the NSA-already. To make matters worse, the president himself, has two review boards, one external and one internal, to review the NSA. Now, today, in the Wall Street Journal, we find, that the United States President himself, didn't know the NSA was spying on 35 world leaders. So now, what is happening, is that the revelations of Edward Snowden-are moving the "presidency" around, to apologize to world leaders, that the president didn't even "know" were having their privacy violated.

Now here's the question. Did Edward Snowden, moving all these people around including the president now-do a public service to the United States. Because, even the president "didn't know." And as they said about Nixon, "what else don't you know." About Watergate.

Why. Because President Obama, didn't even know what was going on. So now, can the government admit the truth? Were Edward Snowden's actions a public service-because look at what has happened, and how many people are moving on it. In other words what is Edward Snowden guilty of, when even the President didn't know.

Is President Obama "man enough" to thank Edward Snowden. Man enough, to say, "Ok, you certainly moved the govt. I guess you actions are right.'

What do you think the chances are of that-even for the United States of America?

Do you think they can even tell the truth in America anymore? It doesn't seem right to punish Snowden for what the President didn't know, and for moving congress.

You know what is next? Foreign leaders-will thank Edward Snowden in the long run.

And the United States? We will have to see. Definitely President Obama and the NSA are wrong. So now, it's us to the United States, to see who is "man enough" to admit it and not persecute Mr. Snowden, for a public service. You gonna what, throw him in jail, for showing the president something.

I'm from the south. Invite him home, no strings attached, and thank him also, if you are "man enough." Who in our government, man or woman, is "man enough."

If you didn't know about that one Mr. Obama, what else don't you know? All of you, owe Mr. Snowden an apology, and more and more people are becoming grateful to him.