The "Indispensable Nation" threatens another war against children

"I wonder now how the foreign policies of the United States would look if we wiped out the national boundaries of the world, at least in our minds, and thought of all children everywhere as our own. Then we could never drop an atomic bomb on Hiroshima, or napalm on Vietnam, or wage war anywhere, because wars, especially in our time, are always wars against children, indeed our children." (Howard Zinn, 1922-2010.) 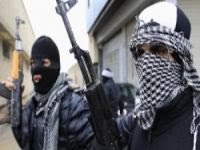 Oh dear. It's the Hitler thing again. Considering the barely imaginable oceans of dollars US war departments spend on selling their newest illegal, manufactured war of aggression, they certainly spend little on wordsmiths. In the UK the literacy level of the military has been lowered to seven years old. The juvenile limitation has clearly spread to their US allies massacre-marketing teams.

In justifying the blitz on the population of the former Yugoslavia in 1999, President Bill Clinton, comparing President Slobodan Milosevic to Hitler, said: "What if someone had listened to Winston Churchill and stood up to Hitler earlier? How many lives would have been saved ... how many American lives might have been saved?"

In December 2002 on the eve of a NATO summit, George W. Bush addressed students and: " ... compared the challenge of the Iraqi President to the Nazi invasion of Czechoslovakia in 1938, which led to World War II.

And in words near identical to those being currently showered towards Syria's President Assad, he demanded that Saddam: "declare completely and truthfully his arsenal of terror", and threatened serious consequences if he failed to meet the December 8 deadline to disclose his weapons of mass destruction.

"Deception this time will not be tolerated; delay and defiance will invite the severest of consequences", Mr Bush told the students. (i)

Saddam Hussein's Administration, of course, delivered a 12,000-plus page document on what was no longer possessed to the UN weapons Inspectors in New York, which was instantly stolen by the US delegation to the UN, near decimated and never heard of again.(ii) The subsequent destruction of Iraq is history. Syria needs to be very careful indeed.

For Libya"s Colonel Quaddafi, it was a defecting Minister, Mustapha Abdeljalil who pulled the Hitler card (his alleged Western airline ticket funders must have taught him well) who told Sweden's Expressen. "Quaddafi's time is up. He is going to go like Hitler, he is going to commit suicide", the Hitler comparison was enthusiastically picked up across the world's mainstream media.

However he did add that Quaddafi would to make good on his pledge to die on Libyan soil rather than opt for exile. As vowed by Saddam Hussein, and as has pledged President Assad. A courage their detractors - baying from the safety of thousands of miles from the killing fields they ferment - fail to exhibit.

On 2nd September, Secretary of State John Kerry compared President Assad to both Hitler and Saddam Hussein. By 7th September, speaking in Paris, apparently emboldened by a "may be", "sort of", "perhaps", backing from President Hollande, Kerry lost the plot, describing Syria as: ' "our Munich moment", comparing possible military intervention to the 1938 Munich Agreement, which ceded control of part of Czechoslovakia to Nazi Germany.' (BBC, 7th September.)

At the time of the attack on Iraq, America's last imperial Middle East slaughter, broadly half the population of then just 27 million was under fifteen or sixteen, figures vary.

When they moved on to Africa and Libya, they also attacked a country where nearly a third of the miniscule population of just five and a half million, was 0-14 and the median age was 24.7. In context, the population of the global bully on the block is 315 million, with a median age of 37 - old enough to know better.

Did Kerry think up the farcical Munich nonsense all on his own? Or perhaps he is trying to out-do his assassination addicted predecessor Hillary Clinton who laughed as she said of Quaddafi's appalling, US-NATO-implicated lynching: "We came, we saw, he died."

According to a detailed article (iii) Kerry does have killer credentials. During his time in Vietnam as a Swift boat operative :

"Day after day, night after night, the Swift boats plied the waters, harassing and often killing villagers, fishermen and farmers. In this program, aimed at intimidating the peasants into submission, Kerry was notoriously zealous. One of his fellow lieutenants, James R. Wasser, described him admiringly: 'Kerry was an extremely aggressive officer and so was I. I liked that he took the fight to the enemy ... not afraid to spill blood for his country.' "

In an incident involving the: "kidnapping of two villagers (one of them a young woman) from their hut, they'd seen four people in a sampan and promptly killed them. The two prisoners were 'body-snatched' as part of a regular schedule of such seizures, the victims would be taken to (a detention centre holding 30,000 people) for interrogation and torture." Shades of Abu Ghraib.

"Kerry's term ... for such outings - and there were many in his brief time in Vietnam - is 'accidental atrocities'."

In "Operation Sea Lords", patrolling the canals and streams off the Mekong Delta:

"The basic plan: "was to terrorize the peasants ... the entire area ... was a free fire zone, meaning the Americans could shoot at will and count anyone they killed as (the enemy.)"

In America's assaults on the international community, by land, waterway, missile or drone, nothing changes.

Further, in 1970 the Senate reported: "The US has dumped on Vietnam a quantity of toxic chemical (dioxin) amounting to six pounds per head of population" in 'Operation Hades', the source of what Vietnamese doctors call a "cycle of foetal catastrophe", resulting in ongoing generations of children with monstrous deformities. In the manual of sick names for US "Operations", "Hades" must come high in obscenity ratings.

Between 1962 and 1971 the U.S. Military Dumped 20 Million Gallons of Chemicals on Vietnam, Laos and Cambodia.(iv) According to the Mines Advisory Group, Laos (population at the time less than 3 million) was bombed with 3 million tons of chemicals and ordnance. Over a million tons a head.

For eight years of this chemical carnage (1969-1977) Henry Kissinger, the man now "mentoring" John Kerry on Syria's alleged chemical weapons, was National Security Advisor and Secretary of State. Even the usually restrained (London) Independent commented on: " ... a 90-year-old 'war criminal' helping to frame" the Syria policy of the Obama administration. (13th September.) In the circumstances, "to frame" should surely be regarded in the criminal context, ie., to set up someone for a crime they did not commit.

In context, in  " ... several serious studies of Syria's weapons program, have been done over the past few years by American and other experts. As a study published by the European Union's non-proliferation consortium in July 2012, concluded, 'Syria's chemical weapons are not tactical or battlefield weapons, but rather a strategic deterrence against Israel's conventional superiority and its nuclear weapons arsenal.' "(v)

Further: "A newly-discovered document of the U.S. Central Intelligence Agency revealed on Monday by Foreign Policy magazine shows that the U.S. agency had decisive evidence dating back to at least the 1980s that Israel had a stockpile of chemical and biological weapons."

Israel has:  "never ratified the Chemical Weapons Convention. Israel has never opened its nuclear facility or its chemical weapons stockpile to international inspections."(vi)

Moreover, the Conservative Center for Arms Control and Proliferation has issued its 2013 report on Global Nuclear Weapons Inventory. It relies on US intelligence for its report on Israel because Israel uses the identical "don't confirm, don't deny" policy the US denounced with menaces, when Syria used it:

U.S. intelligence believes that Israel possesses an estimated stockpile of 80 nuclear warheads. However, they are believed to possess sufficient fissile material to increase that total to 200, should they desire."

It also counts Israel and Egypt as the only military allies of the US among  "A relatively small number of countries ... still suspected of harboring offensive biological and chemical weapons programs at various stages of development."

The Center also ignores the delays in eliminating US stockpiles and its opposition to inspections.(vii) The United States is cited as having 5,449 metric tons in its chemical weapons arsenal, which due to the acute hazards of disposal, will not have the relevant disposal facilities in place until 2021.(Japan Times, 12th September 2013.).

Of Syria of course, it is demanded that their alleged stocks are disposed of in just months, whilst a ruthless and vicious insurgency rages - funded by the demanders - or face an Iraq, Libya or Balkans type decimation.

Also, according to a Russian Report, the US is  "undertaking research on smallpox, which is prohibited by the World Health Organization" and is accused of undertaking biological weapons research, in possible contravention of Article 1 of the Biological and Toxin Weapons Convention.(viii)

Kerry , of course, talked of  the need for "credible" and "quick" investigations of Chemical Weapons in Syria. The inspectors went to just one site, hopelessly time limited by being pulled out early. The arm twisting can only be imagined. We have been here before. As Scott Ritter, former lead weapons inspector in Iraq commented of the December 1998 Iraq bombings, justified by more lies and false pretext: "The U.S. has perverted the U.N. weapons process by using it as a tool to justify military actions, falsely so. ... The U.S. was using the inspection process as a trigger for war." (NBC Today show, December 17, 1998.)

Syria has surely noted that: "The U.S. team includes officials who worked on inspection and removal of unconventional weapons from Libya after 2003 and in Iraq after the first Gulf War." Both were disarmed. Both became destroyed sitting ducks.

Remembering the theft of Iraq's accounting of their weapons, or non weapons, Syria's UN delegation will surely need no reminder to make the handing over of theirs very public - and retain plenty of copies.

Ironically, in December 2003, Syria tabled a UN Security Council Resolution calling for a biological and chemical weapons free Middle East. When the US threatened to veto it, it was consigned to the trash bin.

Oh, the hypocrisy. As Stephen Zunes has written in an aptly entitled article, The US and Chemical Weapons: No Leg to Stand On: " U.S. policy regarding chemical weapons has been so inconsistent and politicized that the United States is in no position to take leadership in response to any use of such weaponry by Syria."(x)