Syria: The questions that must be answered before any aggression

Below we pose several questions, the basis of this article, which intends to reveal the whole truth behind the issue of the Syrian civil war. These questions have been sent to the British Foreign and Commonwealth Office and the US State Department. Their answers, if they have any, will be revealed to our readers. 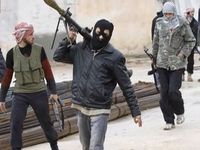 Question 1: Why has the west been supporting Syrian terrorist forces for two years?

Question 2: Do you not entertain the notion that to solve the Syrian issue, it would suffice for the west to cease arming, financing and aiding the Syrian terrorist forces fighting President Assad?

Question 3: Are you, or are you not, aware that in supporting forces hostile to President Assad, you are also supporting sources loyal to al-Qaeda?

Question 4: Do you now admit that your respective authorities lied regarding the issue of Weapons of Mass Destruction in Iraq? Should the answer be negative, then please inform us as to where these weapons are.

Question 5: Regarding the previous attacks with chemical and biological weapons (CBW) in Syria, by the rebels you support, and confirmed by the UNO's Carla del Ponte, what are your comments?

Question 6: Under international law it is illegal to take sides in an internal conflict. How do you justify your actions in a. Libya and b. Syria in this context?

Question 7: The following accusation was sent to the European Court of Human Rights and the International Criminal Court at The Hague.

Why did it not receive the courtesy of a reply?

Question 8: Under what authority does British Foreign and Commonwealth Secretary William Hague state/insinuate that the Government of President Assad was responsible for the recent chemical attack in rural Damascus, without an iota of evidence?

Question 10: Did you or your services know that the said "chemical attack" was going to take place beforehand? If negative, then how would you respond to the following evidence? http://www.youtube.com/watch?v=rUW_oFufU-Y

Question 11: What is your response to evidence that such weaponry was fired from rebel-held areas using improvised missile technology?

Question 12: Do you deny that your special forces are involved in the field in Syria and if the answer is negative how would you respond to images providing evidence that such persons had been captured? Would you also deny that such personnel would have been able to provide to the terrorists the possibility of delivering such weaponry?

Question 13: Why did your leadership commit a mission creep in Libya which breached the terms of the UNSC Resolutions 1970 and 1973 (2011)?

Question 14: Are you aware that due to the American, French and British governments' successive lies in the last two decades, due to your continued war crimes and crimes against humanity, due to your illegal and unethical foreign policy, NATO in general and the FUKUS Axis (France-UK-US) in particular, have lost any moral high ground they once claimed?

Question 15: Why do you not explain to your citizens that President Assad has the support of the vast majority of the population of his country and would you please draw up a list of the popularity ratings of the 30-odd terrorist/opposition groups fighting against the State?

Question 16: If groups of armed terrorists took up weapons against the authorities in your countries, what would you do? Remember what Cameron said after the August 2011 riots in London? "WHEN IT COMES TO RIOTS, HUMAN RIGHTS GO OUT OF THE WINDOW." Imagine what he would do with thousands of armed terrorists running amok, slicing the heads off children and the breasts off women.

Question 17: What do you have to say about the murder of several thousand Syrian police officers and army personnel by the terrorists you support? Do you therefore agree that your own security personnel are legitimate targets?

Question 18: Back to Syria and the claims that the Government of President Assad was responsible for the "chemical attacks" what do you have to say in response to the following article?

Question 19: Given the previous attacks with chemical weapons by the terrorist forces you support, do you honestly believe that anyone is going to believe your allegations that President Assad, a doctor, is going to deploy such weaponry on the outskirts of his capital city the same day the UN weapons inspectors arrive to ascertain the facts about previous attacks (by your terrorists)? Do you seriously think he is that stupid?

Question 20: Has anyone in a position of authority in your countries issued the courtesy of an apology for the murder of the Gaddafy grandchildren in 2011 and the lynching of Libya's sovereign leader at the hands of NATO backed terrorists?

Question 21: There are allegations that SOF teams are already on the ground in Syria on recce missions and programmes to train terrorists to attack the Syrian authorities. What is your comment?

Question 22: Do you deny that senior military and political personnel in the United States of America and the United Kingdom are aware of the active campaign by NATO forces in Syria to commit assassination attacks, to break the back of the Alawite forces and to carry out terrorist activity?

Question 23: What is your answer to this evidence that the USA and the UK were indeed behind the recent chemical attack in Syria?

Question 24: At Nuremberg, the United States and Britain pressed the prosecution of Nazi leaders for planning and initiating aggressive war. Supreme Court Justice Robert Jackson, the head of the American prosecution staff, asserted "that launching a war of aggression is a crime and that no political or economic situation can justify it." He also declared that "if certain acts in violation of treaties are crimes, they are crimes whether the United States does them or whether Germany does them, and we are not prepared to lay down a rule of criminal conduct against others which we would not be willing to have invoked against us." What is your response?

Question 25: On the issue of chemical weapons, why did the forces you integrated deploy Depleted Uranium in several theatres of war and this being the case does this not render you guilty of using chemical weaponry against civilians? In case you are considering stating that DU is not a chemical weapon then how would you reply to this excerpt from Page 101 of the June 1995 paper June 1995 "Health and Environmental Consequences of Depleted Uranium Use in the US Army", (US) Army Environmental Policy Unit:

"If DU enters the body it has the potential to generate significant medical consequences. The risks associated with DU are both chemical and radiological." ?

Commander of NATO during the 1999 War on Yugoslavia

Oh and Question 27: Is it true that Israel has granted GENIE ENERGY exploration rights for shale gas inside Syrian territory, major shareholders of this company being Rupert Murdoch and Lord Jacob Rothschild?