It comes as no surprise that certain quarters in the west suggest boycotting the Russian Winter Olympics in Sochi in retaliation against what they perceive as an unjust policy against the LGBT community by the Russian authorities. Where were these people when NATO was strafing civilian targets in Libya and are not Russian laws for Russians? 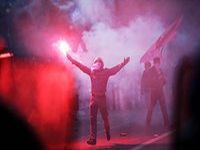 The first point is to get things straight regarding the legal framework covering all citizens in Russia. The age of consent in Russia is 16 years of age, regardless of sexual orientation; transsexuals and transgender persons are allowed to change their legal gender, homosexuality is not regarded as a mental illness and it is not a criminal offence under Russian law; single persons can adopt children whatever their sexual orientation, while homosexuals can serve in the armed forces without any type of restriction.

Secondly, let us examine the law in question that was passed recently by 436 votes in favour and zero against with one abstention by Russia's DUMA, or Parliament: it is a law which bans the propagation of non-traditional sexual activities among minors. In other words, it is a law which prohibits the distribution or dissemination of homosexual acts, among children.

So, suppose those who are making this bru-ha-ha about the Winter Olympics and are talking of boycotting them, considered how they would feel if someone showed graphic images of same-gender sexual activities to their children? One can only consider that they would stand back and applaud?

The third point in question here is that of cultural values and respect for these in context. Russian society today stands solidly behind traditional family values, and as a rule Russian society today does not understand, or condone, same-sex marriage or unions. Period. It is not for the west to complain about it, any more than it is up to the average Russian citizen to launch a campaign against London because it is still illegal today to run or sing in the Burlingdon Arcade between Piccadilly and Cork Street.

If an Afghan woman wishes to use the burqah to reveal herself only to her husband, it is a cultural question, as it is also a cultural question that western girls do not dress up in mini-skirts and hot pants and cavort around inside Mosques in Saudi Arabia, neither do people kiss in public and it is generally accepted that in Cathedrals in Italy women cover up a bit.

If a man or woman enter a synagogue they are supposed to cover their heads as a sign of respect, at western dinner tables one does not belch loudly or say "shabash" (be joyful) to show that one has enjoyed the meal, but in northern India it is a compliment to the chef. Many African societies do not condone gay Anglican bishops but this is considered acceptable in some communities in the UK and North America.

After five hundred years of intrusion, colonialism and imperialism, sticking their noses into other societies' business, spreading their own morals and morality across the globe, imposing it in a top-down, arrogant, murderous and chauvinistic attitude, complete with massacres, the west just cannot mind its own business, leave people alone and accept that things do not have to be the same the world over.

So whatever a person's own position regarding the LGBT community, however a person feels about the transgender, lesbian, gay or bisexual persons in society and whether or not one interacts personally with these people in one's social life, or networks with others trying to defend their rights, the fact of the matter is that the LGBT community are not discriminated against under Russian federal law, which merely reflects the stance of Russian society in not recognizing same-sex unions and strives to protect minors from exposure to unnecessary images at a tender age.

Suppose the campaigners stopped the hysteria, dropped the hype and took a stand against NATO's illegal wars, its support for terrorists in Libya and Syria, its intrusion into the internal affairs of sovereign states, its wanton acts of mass murder, strafing civilians with military hardware, targeting civilian structures with the same? Suppose they started criticizing the arming of rogue elements on NATO's own lists of proscribed terrorist groups, the transportation of al-Qaeda murderers to Syria, its detention of persons without due legal process in its torture and concentration camps, its practice of urinating in food, setting dogs on people, forcing Moslems to eat pork, ridiculing their sexual organs, and sodomising them.

If NATO or the citizens in its member states want Russians to start behaving in the same way, it is not going to happen. What was that about casting the first stone?