The Libyan People's National Movement has been launched in Libya, declaring the principles of the Jamahiriya of Muammar al-Qadhafi and proclaiming the return to a Green Libya, in opposition to the chaos, bloodshed, corruption and incompetence of the FUKUS-imposed "Government" in Tripoli. 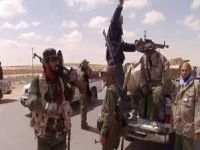 The declaration comes in the form of The Founding Declaration of the Libyan People's National Movement and the backdrop is the total failure of the "Government" imposed by the FUKUS-Axis (France-UK-US) and implemented through the terrorist atrocities of NATO and its terrorist minions, many of whom were mercenaries from Chechnya, Albania, Afghanistan and contracted mercenaries paid by the Gulf Cooperation Council (NATO bedboys Qatar and Saudi Arabia).

And what is the situation in Libya? According to those who founded this movement, they are the following: "Systematic torture of prisoners, extra-judicial killings, armed tribal conflicts, economic and political foreign domination, robbing of national wealth, the reality of Al-Qaeda's control of parts of the country, the invention and establishing of fragmented regional and cross-border identities to replace the national unifying identity, anti-black politics amongst the armed militias, the enforced displacements of whole tribes, the flight of a third of the population to neighbouring countries for fear of persecution".

Thank you, Messrs. Cameron, Hague, Clinton, Obama and Sarkozy. Sterling job. Apart from that, millions of Libyans who support Muammar al-Qathafi are being excluded from the political life of Libya, living in fear. They cannot counter or oppose any policies implemented by the Western-backed terrorist militia in the virtual absence of any central authority.

The new political movement encompasses all Libyans who are opposed to the catastrophic current state of affairs and who wish to avoid another civil war.

The following Declaration is concerned with the founding of the "Libyan Popular National Movement" and has been written and agreed-upon by most of the political/social/military leaderships of Green Libya.

Maintain the territorial integrity of Libya, safety of its land and security of its people;

Work on the release of all prisoners without exceptions, including Saif al-Islam Gaddafi;

Treatment and compensation to all victims of war without exception;

Create conditions and safeguard for the return of forcibly displaced people to their towns and villages;

Building legislative, executive and judiciary institutions of the Libyan state, on the basis of peaceful democracy based on citizenship, without discrimination of ethnic or sectarian, regional or political belief;

Rejecting policies of exclusion and marginalization, that differentiate between the components of the Libyan people;

Launching a reconstruction process of public and private properties destroyed during the war, without discrimination;

Investigation of war crimes and crimes against humanity committed during the war, forming courts with public and international control standards to decide on
those issues;

Ensure the full participation of the Libyan citizens, exercising their right to political decision-making, to choose its leaders and the political system in the ways of democracy, under a constitution approved by the Libyan people, without any tutelage or exclusion;

Put the Holy Quran and the Sunnah as the reference of legislation in Libya, away from extremism and fanaticism;

Urging the international and regional organizations, NATO members and countries supporting them in the aggression to take full responsibility for the situation in Libya now, and for their legal violations and breaches of the Security Council decisions;

The LPNM [Libyan People's National  Movement] declared also their exclusive use of peaceful ways to accomplish their goals, but warned that the continuing repression, killings, torture and forced displacement will lead to more violence and hatred, and that the LPNM components and its fighters are ready to engage in jihad and armed struggle for the defense of Libya and its citizens if necessary.

NATO, the FUKUS Axis and its leaders are guilty of war crimes and breach of international law. They should be tried in a court of law. Neither the ICC nor the European Court of Human Rights even returned the courtesy of acknowledging the following document: