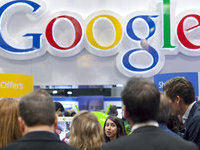 The Western media is currently full of articles reporting Google's denial that it cooperated in a government program to massively spy on American and foreign citizens by accessing data from Googles servers and those of other U.S. software companies.

The mainstream media has, however,  almost completely failed to report that Google's denial, and its  surface concern over 'human rights', is historically belied by its their deep involvement with some of the worst human rights abuses on the planet:

Google is, in fact, is a key participant in U.S. military and CIA intelligence operations involving torture; subversion of foreign governments; illegal wars of aggression; and military occupations of  countries which have never attacked the U.S. and which have cost hundreds of thousands of lives in Afghanistan, Iraq, Pakistan, and elsewhere.

To begin with, as reported previously in the Washington Post and elsewhere, Google  is the supplier of the customized core search technology for 'Intellipedia, a highly-secured online system where 37,000 U.S. spies and related personnel share information and collaborate on their devious errands.

Agencies such as the so-called 'National Security Agency', or NSA, which is implicated in the current 'spying on Americans' scandal,  have also purchased servers using Google-supplied search technology which processes information gathered by U.S. spies operating all over the planet.

In addition, Google is linked to the U.S. spy and military systems through its Google Earth software venture.  The technology behind this software was originally developed by Keyhole Inc., a company funded by Q-Tel http://www.iqt.org/ , a venture capital firm which is in turn openly funded and operated on behalf of the CIA.

Google acquired Keyhole Inc. in 2004.  The same base technology is currently employed by U.S. military and intelligence systems in their quest, in their own words, for "full-spectrum dominance" of the planet.

Moreover, Googles' connection with the CIA and its venture capital firm extends to sharing at least one key member of personnel.  In 2004, the Director of Technology Assessment at In-Q-Tel, Rob Painter, moved from his old job directly serving the CIA to become 'Senior Federal Manager' at Google.

As Robert Steele, a former CIA case officer has put it:  Google is "in bed with" the CIA.

Given Google's supposed concern with 'human rights' and with user-privacy, it's worth noting that Wired magazine reported some time ago that Google's friends at In-Q-Tel, the investment arm of the CIA, invested in Visible Technologies, a software firm specialized in 'monitoring social media'.

The 'Visible' technology can automatically examine more than a million discussions and posts on blogs, online forums, Flickr, YouTube, Twitter, Amazon, and so forth each day.   The technology also 'scores' each online item, assigning it a positive, negative or mixed or neutral status, based on parameters and terms set by the technology operators.   The information, thus boiled down, can then be more effectively scanned and read by human operators.

The CIA venture capitalists at In-Q-Tel previously said  they will use the technology to monitor social media operating in other countries and give U.S. spies ¡°early-warning detection on how issues are playing internationally,¡± according to spokesperson Donald Tighe.   There is every possibility that the technology can also be used by the U.S. intellligence operatives to spy on domestic social movements and individuals inside the U.S.

Finally, Obama during his recent meeting with Chinese president Xi, again more-or-less accused China of cyber intrusions into U.S. government computers.  There has, however, been a curious absence from the statements emanating from Google, from U.S. government sources, and from U.S. media reports of truely substantive evidence linking the Chinese government with the alledged break-in attempts.  Words like 'sophisticated' and 'suspicion' have appeared in the media to suggest that the Chinese government is responsible for the break-ins.  That may be so.  But it is striking that the media has seemingly asked no tough questions as to what the evidence behind the 'suspicions' might be.

It should be noted that the U.S. government and its intelligence agencies have a long history of rogue operations intended to discredit governments or social movements with whom they happen to disagree.  To see how far this can go, one need only recall the sordid history of disinformation, lies, and deceit used to frighten people into supporting the Iraq war.

Whether the past attacks on U.S. government systems, Google email, et al  originated from the Chinese government, from the U.S. intelligence operatives, or from elsewhere, one thing is clear:  A company that supplies the CIA with key intelligence technology; supplies mapping software which can be used for barbarous wars of aggression and drone attacks which kill huge numbers of innocent civilians; and which in general is deeply intertwined with the CIA and the U.S. military machines, which spy on millions, the company cannot be motivated by real concern for the human rights and lives of the people in the U.S. and on the planet.