The haircut from hell

What will you do when they take all your money? (Hint: They already have.) everyone's the enemy of the U.S. government, even those who do their dirty work, dimwitted dupes scheduled for elimination once they've fulfilled their fraudulent functions. 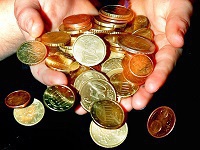 Prior to last week's disturbing bureaucratic bank robbery stories from Cyprus, then New Zealand, then Canada - being piled on top of endless stories about drones, endless purchases of hollow point ammunition, and endless statements out of Washington always meaning exactly the opposite of what they say - I was feeling pretty sure that the real purpose of Washington's farcical rhetoric clearly foreshadowed its next immoral invasion of yet another unsuspecting country -  only this time it would be this one! Land of the unfree and home of the kosher ripoff artists.

After all, everyone's the enemy of the U.S. government, even those who do their dirty work, dimwitted dupes scheduled for elimination once they've fulfilled their fraudulent functions.

But after the blatant robbery of its own people by the government of Cyprus to fatten the spending habits of these criminal international banks - and the revelation that first New Zealand and later Canada already had these same plans in the works BEFORE the European Union-controlled banks forced Cyprus to rob their own depositors - I'm no longer pretty sure about it - I'm certain.

And what a great idea!

The haircut from hell will save a great deal of bloodshed, and exterminate the needless boffins like you and me much more efficiently, plus with less pain for them and more pain for us. Now that's what I call a progressive social program.

Here I was thinking there'd be a town-by-town shootout between steroid addled U.S. Army troops fresh from their serial rapes of most Middle Eastern countries against vastly outgunned by seriously courageous informally organized militia types. What a bloodbath that would be! No one I've ever heard of has ever won a duel with a drone. Certainly no one will ever win two.

I don't care where you think you can hide. Drones and satellites can pick a pimple off a pumpkin, at night and in bad weather, anywhere in the world. They can see THROUGH things, as well, so there are no hiding places that don't utilize layers of lead.

There will be no big fight for freedom.

There will be damned few of these High Noon episodes, and the ones that do happen will be brief and predictable, since the whole planet is now surveillable, and Nightmare Nancy Pelosi and her phalanx of Jewish puppets will assure that most of the population has no guns, and no way to defend themselves from the high-tech SWAT teams now poised and practicing to swoop down upon them.

People will be begging for implanted surveillance chips just to get some food, even though both will be fatal.

That's why the haircut is a better way. When they say "We'll just take a little off the top", they are talking about from the neck up. What do you think all those FEMA coffins are for? Or the biotech food monopoly by a Jewish weapons manufacturer?

Why stage some fake disaster, or some false flag alien invasion, when they can just empty your wallet electronically and force you to beg - or kill - for food?

Why engage in random firefights when you can just take people's money on a whim and all at once, rendering them paralyzed, unable to buy food or find lodging in this camera infested world.

And the innocent and ignorant bystanders, starved out by government fiat, will have no choice but to get on the bus to the FEMA camps, where they will be promised food that will be poisoned and medicine that will make them sicker and more comatose than they already are.

Let's just say you won't be going home again, because your home, if it's not destroyed, will already have been sold to the next round of unsuspecting stooges by some powerful foreign investor.

Besides, you won't have any money to pay the rent or the mortgage payment because the government has already taken it from you, and infected you with some incurable disease, if it hasn't already beheaded you outright, or set you on the road to agonizing starvation with its typical run of popular biotech foodstuffs utterly devoid of nutrition.

We know what all the hollow point bullets are for - us, at least the bullets not directly shipped to hired jihadists in Syria, Yemen or any other one of those bloody places we can't find on a map on a bet.

But most of those bullets will be used to defend the banks, and the so-called government offices, used on people clamoring for their money which has been taken so Obama's daughters can take their million-dollar vacations and those stock brokers who engineered the bailout can hire top-notch security companies to gun down the vagabonds who actually think they can steal their money back from the Jewish vultures who have taken it.

In case you haven't noticed, the game is over. Your sojourn to corpsedom is already scheduled somewhere in the bowels of the Department of Homeland Security fortress. Nanoaluminum in your lungs, nanocannibals in your bloodstream, and nano brains turning the world into the Island of Dr. Moreau for fun and profit.

The stupid cops are in on the program, never realizing that they too are scheduled for extinction once all the easy marks have been eliminated.

And the pliable soldiers so brainwashed into defending their country, this vaunted "global force for peace", have already been taken care of with these time-delayed vaccinations that guarantee their retirement bonuses will be an agonizing cancer tour through the Veterans Administration gulag where everyone is indifferent, overworked, and themselves about to suffer the same fate as the killer cops and the military robots.

So what will you do about it? Lay down and die (like so many elderly are already doing)? Petition your Congressperson and wait for an answer that never comes? Sue somebody in a court system that only recognizes the right of the fat cats who pay them their bribes after choosing the most corruptible people in the land to be judges? Or keep eating the roadside feces they serve at the chain eateries to keep the doctors in business?

The only way this game is not over is for everyone within earshot of this screed to go ballistic on every local official still pushing the 9/11 lie, or explaining the validity of  these phony wars, or defending the right of conscienceless doctors to peddle poisons and create death panels while the most respectable people in American communities support the rights of the bankers who bribe them.

If you don't do this, and do it right now, then you may fully expect to be one of those irrelevant people declared superfluous flotsam by those rich pigs who HAVE taken the bribe and deem your impending death only a routine economic necessity.

Remember, the haircut from hell is "just a little off the top", from the neck up!

John Kaminski is a writer who lives on the Gulf Coast of Florida, constantly trying to figure out why we are destroying ourselves, and pinpointing a corrupt belief system as the engine of our demise. Solely dependent on contributions from readers, please support his work by mail: 6871 Willow Creek Circle #103, North Port FL 34287 USA. [email protected] https://therebel.org/kaminski