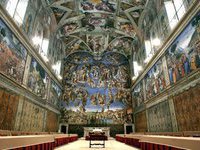 Marriage for Priests, Rights for Gays and Women

If Jesus Christ showed up today he would be appalled at many things in this world none more so than the Catholic Church. The Rock upon which Catholicism is built is crumbling more each day, the foundations are becoming unhinged. It is not the anti-Christ or some demon raising havoc; it is the Catholic leadership in the Vatican and its senior leaders around the globe who have lost touch with the rapid changes in the 21st Century world. Catholic Church membership is dwindling, its financial stability is at stake, it has lost its moral compass making a mockery of Christ's teachings, and in the age of austerity that sees millions out of work and home, Church leaders lead lavish lifestyles.

And what the hell is the deal with the Pope Mobile and for that matter all the security that surrounds religious leaders who claim to have a channel to God? What has become of faith and belief? Would not God take care to protect the favored from a bullet?

As the Church implodes, national governments/societies are legitimizing gay marriage and stronger rights for women (who will be the first Joan of Arc in the US military?), the universe that is the brain is being explored with new evolutionary cognitive neuroscientific tools, and humanity is beginning to understand that the environment/planet should not be trifled with.

The Church's malady of sexual predation by male priests upon children and each other is sickening not just for the act itself but also the notion-still accepted by many around the world--that the perpetrators are supposed to be the Vicars, the messengers, of the Son of Man and God his Father here on Earth.

The Catholic Church has strayed a long way from Christ's teachings as set forth in the Gospel According to Matthew. What ever happened to the message of frugality and humility preached by Jesus? Why the massive cathedrals, ostentatious ceremonial garb and the development of fascist sects within the Catholic Church like Opus Dei? Where are the Jesuit Soldiers when you need them?

It is God Damn depressing for someone who wished to be an Archangel.

Mary Elizabeth Williams writing in Salon, says it best, "I am consistently outraged by the corruption and abuse of power that has gone on within the church, and heartbroken over the lives that have been callously shattered because of it. I am appalled when an institution that should be a force for peace and progress instead focuses on promoting intolerance. I'm furious when rigid dogma leads to senseless death.

That's why I tackle these issues regularly in my writing. My religious upbringing trained me to speak out against injustice and exploitation, and hey, if that means making a stink about the way the church conducts itself, I guess I can thank Catholicism for showing me how to do it. Because if your whole enterprise was founded by a troublemaking, authority-questioning outsider, you shouldn't be surprised if that's what you get from his followers."

Amen Ra to that.

Read This! Money Changers and a German Defense Contractor

The World Socialists pulled no punches in its analysis of the Catholic Church's self-inflicted pain and it is a read not available from many news outlets. So here are the highlights.

"The 85-year-old German-born pope, who as a young seminarian passed through the Hitler youth movement, is stepping down today as head of the Catholic Church, having spent less than eight years in the post... Reports that appeared in Italy's largest-circulation daily, La Repubblica, last week provided a window into the crisis gripping the Vatican. The first report, published on February 21, dealt with the growing proof of systemic corruption within the Vatican that had been produced by an investigation that the pope had ordered into the so-called Vatileaks scandal. The probe was headed by the Spanish cardinal Julián Herranz Casado, a member of Opus Dei, the secretive right-wing Catholic order that was closely linked to the dictatorship of Francisco Franco. According to La Repubblica, last October, Herranz Casado informed the pope that the investigation had uncovered a secret faction within the Vatican hierarchy that was "united by sexual orientation. According to La Repubblica, it was on December 17, the date of delivery of the final 300-page secret report-two volumes, bound in red and bearing the seal "pontifical secret"-that the pope made his decision to abdicate.

The prospect of another sex scandal at the heart of the Vatican no doubt gave Ratzinger pause. As pope, as well as in his previous position of Prefect of the Congregation for the Doctrine of the Faith (in an earlier epoch known as the Grand Inquisitor), Ratzinger had overseen the Church's handling of an escalating series of scandals involving the sexual abuse of children at the hands of priests that spread across North America and Europe. The scandals have had a direct financial impact on the Vatican, with donations from the US, the most important source of funding, reportedly dropping, even as the Church has been forced to pay out over $3 billion in settlements of sex abuse cases. Given these pressures, the financial operations of the Vatican have become all the more important to maintaining the Church hierarchy. This side of the Catholic Church has long been among its most opaque, but may well have been a major factor in the decision of the pope to abdicate.

Over the past two years, the Vatican bank, formerly known as the Institute for Religious Works (IOR), has been mired in a series of financial scandals, recalling nothing so much as the period in the early 1980s, when the IOR was at the center of a the spectacular collapse of Banco Ambrosiano. This scandal tied the Vatican to the Mafia and the clandestine and fascistic P-2 Lodge. Ambrosiano's chairman, Roberto Calvi, who was dubbed 'God's banker,' was found hanging from London's Blackfriars Bridge on the eve of the bank's collapse in 1982.

In September 2010, the Bank of Italy's Financial Intelligence Unit informed the Vatican bank that it was under investigation for money laundering and subsequently seized nearly $30 million in funds that it was trying to transfer out of Italy's Credito Artigiano bank. Investigators had demanded to know whose money was involved, but the Vatican refused to cooperate. Last year, J.P. Morgan closed one of the Vatican bank's accounts when the Church hierarchy would not provide information on the large sums of money being moved in and out of it. And last month, the Bank of Italy closed down all credit card transactions at the Vatican, forcing its commercial operations to go cash-only. In his book 'The Secret Papers of Pope Benedict XVI,' based on the Vatileaks documents, journalist Gianluigi Nuzzi reported that the Vatican bank, with some $8.3 billion in assets, had laundered approximately $280 million on behalf of the Mafia."

As his last substantive act as pope, Ratzinger appointed a fellow German, Ernst von Freyberg, an aristocrat and conservative Catholic, to head the Vatican bank. The appointment appeared to be a pre-emptive move, aimed at preventing his successor from picking his own bank chief. Von Freyberg's appointment provoked new controversy; however, after it was revealed that the German shipbuilding company he chairs had manufactured battleships and U-boats for Hitler's navy and is currently producing warships for the German government.

A Vatican spokesman responded to questions about the propriety of naming an arms manufacturer to head the Church's bank by insisting that the von Freyberg's main line of work was building luxury yachts and that 'he also organizes pilgrimages to Lourdes, he is a member of the Order of Malta, he takes care of the sick, so certainly he is a person with a notable human and Christian sensibility.'"

Bring women into the leadership fold.  Patriarchal old men in expensive costumes need a lot of help.  In October 2010, a new study co-authored by Carnegie Mellon University, MIT [Massachusetts Institute of Technology], and Union College researchers documented the existence of collective intelligence among groups of people who cooperate well, showing that such intelligence extends beyond the cognitive abilities of the groups' individual members, and that the tendency to cooperate effectively is linked to the number of women in a group.

Let the men (brothers, priests, et al) marry women and have families. There is just something weird these days about a bunch of guys providing family advice when they know nothing about it.

Publically open the doors to the publicans, harlots and gay and lesbian. Seek transparency.

Get back to the Gospel According to Matthew. The ideals contained in that document are inspirational, sort of like Thomas Jefferson's Declaration of Independence.

Message to Catholic Church: Listen to The Music Must Change  and  Pure and Easy by The Who.