And our next victim is... The Pangolin!

And another one bites the dust, this time the scaly anteater, or Pangolin, which has been hunted to the verge of extinction and is set to join thousands of other species disappearing every year. Today it is classified as one of the most endangered species of animals in the world, because its scales make cute fashion accessories. 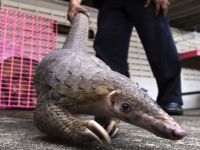 Humankind is about to be judged. Not by our peers today, not by God but by posterity and for the record, let us document the way we treat our planet so that in a hundred or a thousand years' time, given that our species still (dis)graces Mother Earth, people can look back and see our generations for what they are: for the most part, fickle, selfish, ignorant, pig-headed, self-seeking, primary, totally unsophisticated, cruel, sociopathic, irresponsible and wholly untrustworthy. Humankind is a Vandal, destroying the hand that feeds it - Mother Nature.

Only the other day British TV was quoting reasons people gave for taking their dogs to a home or throwing them out on the street. Pride of place went to the comment "It didn't go with the sofa", better even than "it barked" or "it smelt of dog". With this type of fickle behavior not confined to Britain, it is no wonder that Planet Earth loses up to 0.1 per cent of its species every year, mostly due to habitat loss (jungles being bulldozed, for example), to pollution or to over-exploitation for food, or worse, to use as ornaments or to arouse "men" who can't perform.

According to the World Wildlife Fund, we know more about the stars than we do about the species on Earth: "Scientists were startled in 1980 by the discovery of a tremendous diversity of insects in tropical forests. In one study of just 19 trees in Panama, 80% of the 1,200 beetle species discovered were previously unknown to science... Surprisingly, scientists have a better understanding of how many stars there are in the galaxy than how many species there are on Earth."(WRI).

If we do not know even how many species there are, then we certainly do not know what secrets they hold, what cures they could provide or what treasures they may be hiding. With each species we lose, and the figure could be tens of thousands every year (given that we lose 0.1 per cent of the estimated 100 million species on Earth), a potential life-saver is lost, if we think about it selfishly, which appears the only thing that can motivate Humankind.

The rate of lost species today is between 1,000 and 10,000 times higher than the natural, or background, extinction rate (the rate which would take place if human beings did not exist).

So as the Pangolin curls up terrified in a ball, trying to defend itself before it is hacked to pieces, or shot in the back by some coward with a gun, it joins the polar bears clubbed to death by Canadians, dolphins with their beaks hacked off by Japanese fishermen, leaving the gaping hole in their faces gasping for air in a blind panic, bears killed because someone wants to eat its paw or a rhino terminated because some failure as a Man can't get an erection in China.

For the sake of posterity, and for the sake of our descendants' collective view of us, I sincerely hope Humankind changes. True, many people in all countries are trying their best but if we are losing so many thousands of species every year it is not enough. While humankind is ruled by the bottom line in the accounts sheet, it will itself come ever nearer to extinction. Maybe that wouldn't be such a bad thing for Mother Earth.

PS There is useful information on the Pangolin at savepangolins.org.