For Syria lovers, it is a pleasure to read SANA, the Syrian Arab News Agency, which brings good tidings, in spite of the nation's difficult situation, while western mainstream media prefer to spread doom and gloom. 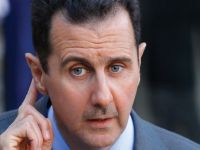 The headline for Wednesday, the 23rd of January 2013: "Terrorists Killed and Injured in Several Areas." The terrorists, Mohammad and Ahmad Kanaan, Khaled Khaito, and others were liquidated in al-Zabadani, Damascus countryside. A vehicle with terrorists inside was also destroyed.

The Syrian Armed Forces killed the terrorists, Ahmad al-Abbar, Mohammad al-Dabbas, Abdul-Latif al-Ezz, and others in Darya, Damascus countryside. Their hideouts were destroyed, all weapons and ammunition confiscated.

Another terrorist group was liquidated around Damascus. Among those who lost their lives were Ahmad Younis, Ahmad al-Rifai, Omar al-Nymir, Midian al-Manzour and Andziad al-Boush. Furthermore a mortar, used by the gang, was destroyed.

In the town of Harasta, the Syrian Army destroyed two cars with terrorists inside, near the Salah al-Diyn Mosque. Among the liquidated terrorists were Anas al-Tourk and Ali Shala.

In the Aleppo countryside, a military unit killed several terrorists as well. Their dens were destroyed in al-Duyahi, al-Dahabia and al-Mansoun. In the city of Aleppo itself, the Syrian Armed Forces cleaned out the quarters of al-Hyloania, al-Layramoun, al-Shahadyn and al-Sheik Said, annihilating the terrorist "al-Amyria brigade."

Meanwhile, the Syrian ministries are keeping up their services, in spite of ongoing attacks. The Syrian Prime Minister, Wael al-Halqui, is speeding up the process of giving jobs to the families of Syrian martyrs.

Sa'ad al-Nayef, the Minister of Health, instructed the Syrian public hospitals to give the martyrs' families free medical treatment. He thanked the private hospitals, pharmaceutical factories and civilians for their help in providing free humanitarian aid.

Dr. Lubana Mashouh, the Minister of Culture, started preparations to document Syria's art on a new internet website which shall serve as a virtual gallery. The site's goal is allowing people to see Syrian artwork and spreading Syrian culture worldwide.

The Syrian artist, Rajaa al-Aridi, is showing her artwork in an exhibition at the Arab Cultural Centre in Sweida. According to the artist, her 44 showcased oil paintings embody "the beauty of nature and femininity." Her colourful modern pictures are very popular with the visitors. Bashar Sa'ab, a Syrian art teacher, praised her use of colours to express hope for a better future.

"Al-Assil: no hay ningún aumento en los precios de la gasolina," is another title of the Spanish edition. Syria's Vice-Minister of Interior Commerce and Consumer Protection, Imad al-Assil, said that there will be no price hikes for gasoline, in spite of rumours to the contrary. A litre of gasoline currently costs 55 Syrian pounds, and the price shall remain stable.

First, school education in the Socialist Arab Republic of Syria is free for all pupils and students. Second, the high level of quality is guaranteed. New universities and research centres are planned to open in 2013. The existing pedagogic infrastructure is being revised on a continuous basis, especially with the modernization of scientific laboratories.

Those readers who are familiar with the history of the Great Socialist Arab Libyan Jamahiriya, are reminded of the high quality of schools and universities under Muammar Gaddafi, who also offered free education to all of his citizens.

Helpful voices from outside are joining in. Prince Aga Khan, Head of the Imami Islamic Shiite Ismaili Council of Syria, reiterates his support for the Syrian nation, confronting foreign conspiracy.

On the occasion of the Prophet Mohammed's birthday anniversary, Prince Aga Khan said that he remains committed to the homeland and admires Syria's determination to defend its sovereignty.

In Prague, the Czech newspaper "Právo" carried an article written by the Czech political analyst, Peter Schnur, who stressed four facts that will finally bring peace to Syria. The first factor is that the foreign-paid terrorists have not been able to reach any lasting military success, although they have tried and still are trying hard to terrorize the Syrian nation.

The second factor is the absence of a united "opposition". There is infighting among various groups, and they cannot offer any specific plan of action. The third factor is the Russian Federation's firm stance to work through the diplomatic channel as a member of the Security Council.

Russia's respect for international law is cited as a guideline for those western barbarians, who think that by causing ever more bloodshed in Syria they will be able to achieve "regime change."

Topics syria
19:01
Putin: EU's refusal of Russian energy resources is an economic auto-da-fé
16:56
Finnish parliament votes for country's membership in NATO
15:47
Finnish admiral suggests Russians be buried in the land of Finland, as in 1939
13:06
Moscow says Finland and Sweden's entry into NATO will 'untie' Russia's hands
12:53
Kremlin declared the United States hostile to Russia
21:11
Ukraine blows up ammonium nitrate to accuse Russia of chemical attack
19:35
German Leopard 2A4 heavy tanks spotted in Ukraine
18:42
Russian large landing ships disappear from naval base in Novorossiysk
18:00
Chechnya thanks the West for the weapons supplied to Ukraine
17:46
Ukraine can skip Membership Action Plan on its way to NATO
Hotspots and Incidents
Up to 16,000 Ukrainian soldiers entrapped in Luhansk People's Republic