The Age of the Siege: Nazi Tactics Revisited

"Disengage, avoid, and withhold support from whatever abuses, degrades and humiliates humanity." (Alice Walker, b:1944) 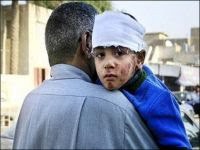 The siege of Leningrad is still considered the most lethal siege in world history, a shocking "racially motivated starvation policy," described as "an integral part of Nazi policy in the Soviet Union during World War 11."

The 872 day siege began on the 8th of September 1941, and was finally broken on the 27th of January 1944. Wikipedia describes it as "one of the longest and most destructive sieges in history and overwhelmingly the most costly in casualties." Some historians cite it as a genocide. Due to record keeping complexities, the exact number of deaths resulting from the blockade's deprivations are uncertain.  Figures range from 632,000 to 1.5 million.

Sieges now extend to entire countries, they have become the torture before the destruction. And they are not counted in long days, but in long years. Iran thirty-three years, Iraq thirteen-plus years. Ironically the disparity in the deaths in Iraq resulting from that siege mirror near exactly what was considered a "genocide" in Leningrad.

Syria has been subject to EU "restrictions" since 2011, ever more strangulating, with near every kind of financial transaction made impossible by May 2011- when "restrictions" were also placed on President Assad himself, all senior government officials, senior security and armed forces heads. The list of that denied is dizzying.  By February 2012, assets of individuals were frozen, as those of the Central Bank of Syria.

Cargo flights by Syrian carriers to the EU were also barred, as was trade in gold, precious metals and diamonds - anything which might translate into hard cash, without which neither individuals or countries can purchase the most basic essentials.

By July 2012, Syrian Arab Airlines and even Syria's Cotton Marketing Organisation had joined the EU's victims. America, of course, had been way ahead of the game, with the Syria Accountability and Lebanese Sovereignty Act, signed into law on the 12th of December 2003, the year of Iraq's comprehensive US-led destruction. Thus the mighty USA's personal siege on under twenty-one million people is now entering its tenth year.

Many pharmaceutical companies had closed, resulting in severe shortages of medication for chronic diseases and the casualties of the insurgency, according to the World Health Organisation.  Prior to the US-UK-EU-NATO supported insurgency, Syria had produced ninety percent of its drugs and medication needs.

However , " ... production has been hit by the fighting, lack of raw materials, impact of sanctions and higher fuel costs." Further, near all pharmaceutical plants were located in areas of the heaviest fighting: Aleppo, Homs and Damascus provinces, and have suffered "substantial damage." The result is "a critical shortage of medicines," according to WHO spokesman, Tarik Jasarevic.

"Drugs for tuberculosis, hepatitis, hypertension, diabetes and cancer are urgently needed, as well as haemodialysis for kidney diseases." Health centres have closed due to violence, damage or being taken over by the Western backed fighters.

"The health facilities that have stopped functioning are located in the most affected areas where the urgent need for medical and surgical interventions is the most prominent," Jasarevic said.

The Syrian Health Ministry reported that it "lost" - stolen or destroyed - two hundred ambulances in a few weeks through June and early August 2012.

Banks run out of cash and the 2012 wheat harvest is likely to have been wrecked because of the shortage of labour, according to U.N. agencies. In the Middle East, bread is still truly the "staff of life."  It all mirrors Iraq, even down to the wheat harvest - in Iraq those bombing the country over thirteen years until the invasion, dropped flares on the harvested wheat and grains, reducing tentative bread security to ashes.

Syria struggles to meet its annual grain imports of around four million tons, because of a superb sleight of hand by the siege imposers. Essential foods are exempt from sanctions, but moneys are frozen, thus the wherewithal to trade. The country is ever potentially hours away from a bread crisis.

In 2011, Syria's own harvest was hit by blight, water shortages and conflict. In December 2012, Iran sent consignments of flour to Syria, temporarily easing the bread crisis, but the siege under which Iran struggles is also of enormity - and shamefully under reported in the West.

And here again is that sleight of hand: "Although trade in medicine is exempt from international sanctions imposed by the UN Security Council and the unilateral sanctions announced by the US and EU, Western banks have been declining to handle transactions." (emphasis mine)

Targeting the sick is the action of the criminally insane. For targeting the newborn surely no expression has been conceived, except by Madeleine Albright when referring to Iraq's sanctions related, half million child deaths, " ... we think the price is worth it." It was not a slip of the tongue, it was clearly to be the New World Order.

This partial list of medications are unobtainable by Iran and should be put on a wall of shame in Washington and all those Nobel winning EU capitol cities:

Nimidopine which reduces the risk of damage after bleeding inside the head, is also on the list. How fortunate Madam Clinton did not suffer her alleged brain-adjacent clot in Iran.

Last October, Iran's head of the Foundation for Special Diseases, Fatemeh Hashemi, stated that six million patients were potentially at risk as a result of sanctioned medications.  A holocaust forwarned - and met by that murderous "international community" with near silence.

Mehrnaz Shahabi also encapsulates the captives in this Age of the Siege:

"Iran (made) ninety-seven percent of its needed drugs domestically ... The devalued currency means that raw materials imported for drug production are now a lot more expensive.

"In many cases, the raw material cannot even be paid for because of the banking sanctions, particularly as the Society for Worldwide Interbank Financial Telecommunication (SWIFT) in compliance with the EU sanctions, has stopped its electronic communication services for Iranian financial institutions and transactions from Iran." Thus, as with Syria, domestically produced drugs are near unavailable.

Additionally, "The most advanced life-saving drugs cannot be made in generic form.These include drugs for heart disease, lung problems, kidney disease and dialysis, multiple sclerosis, thalassaemia, haemophilia and many forms of cancer."

Cancers in Iran have soared and a "cancer tsumani" is predicted by 2015. Since Iran borders and breathes the same air as Iraq, it would not be unreasonable to assume that as Iran is punished for its nuclear industry, America and Britain's, in the form of the depleted uranium weapons used in Iraq, bears some responsibility for another health tragedy of enormity.

"All of the surgeries for thousands of haemophilic patients have been cancelled because a shortage of coagulant drugs. A 15-year-old child died at the end of October due to the absence of coagulant medication. The head of Iran's Haemophilia Society has said, 'This is a blatant hostage-taking of the most vulnerable people by countries which claim they care about human rights. Even a few days of delay can have serious consequences like haemorrhage and disability.' "

As the New Year was celebrated across Europe and the "Land of the Free," the Syrian Upper Mesopotamia Archbishop, Jaques Behnan Hindo, was writing an urgent appeal to the Presidency of the United Nations Food and Agriculture Organisation.

In a situation which he warned "could soon become catastrophic," he said supply routes were halted and "every economic activity appears paralyzed (causing) depletion of vital goods,  and soaring prices. The lack of fuel prevents heating homes and leads to the complete closure of all agricultural activities, just as the planting season begins."

"The grain silos were looted and wheat was sold to Turkish traders who conveyed it to Turkey, under the gaze of the Turkish customs officers." (my emphasis)

It is impossible not to reflect that NATO ally Turkey is the equivalent of the bombing flame droppers on the Iraqi harvests.

In addition to the plundered grain, the Archbishop denounced the gradual disappearance of other vital products including, as in Iraq, babies' milk.

Archbishop Hindo also sent an appeal to Iraq's Prime Minister, Nuri al-Maliki, "Please help us as quickly as possible, by sending 600 fuel tanks, 300 tanks of gasoline and some tons of flour.

"The first victims are the children. You experience in your body, in your soul - and in the children all the injustice" caused by draconian, life threatening, illegal, collective punishment on a nation's people, yet again starting with the unborn, the newborn, and the barely crawling.

At the end of WW11, Leningrad (now Saint Petersberg) was awarded the status of Hero City for collective unwavering courage, resistance and inventiveness under Nazi atrocities.

The world is surely in need of the status of Hero Country for those who exhibit the same courageous qualities against those nations who emulate the same atrocities.