There is one thing the French are not very good at, and that is fighting, unless, of course, they join their FUKUS Axis friends (France, UK, US) in some cowardly attack against a country with porous borders, such as was the case with Libya. Two hundred years after Napoleon was thrashed in Russia we see Hollande crawling in the footsteps of Sarkozy... 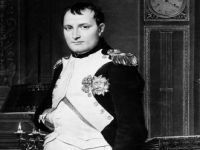 Let us be honest. France produces some excellent wines, some wonderful cheeses, Armagnac, Breton crèpes, cider, some decent motor cars and erm, sports some amazing tapestries, cathedrals and medieval towns apart from being a source of amazingly friendly people. Those who say "Parisians are rude" obviously haven't been there, or else don't speak French.

I do, because one branch of my family comes from Bordeaux. I grew up bilingual and I know enough French to understand Napoleon's letters to his girlfriend, Joséphine de Beauharnais, asking her not to wash because he enjoyed the smell of her sweat. In short, a dirty little pig.

And dirty little pigs, let's be honest, good soldiers do not make. Let us see... the foundations of the European Union are built upon France's cowardice after getting invaded thrice in three generations, by Germany, which literally walked into France whenever it wanted, only for France to run screaming to her FUKUS buddies (despite complaining about Anglo-Saxons) as they fought her wars for her.

Speaking about Anglo-Saxons, perhaps the F part of the FUKUS Axis does not know what the UK and US allies say about France and the French and the French military behind closed doors. It ain't pretty... So after France's imperialistic and cowardly attack against Libya (the country whose Brother Leader was the first international figure to issue an arrest warrant against Al-Qaeda and who allegedly financed Sarkozy's Presidential election) and after France's imperialistic involvement in the criminal act of intrusion against Syria, we learn that France has also started adventures elsewhere.

But then again, the main "do-ers" of French military policy are those confined to the prison/mental hospital environment of the Légion Étrangère, let's once again be honest. And these are, well, the dregs from prisons and mental hospitals who have nowhere else to go and obviously no questions asked by La France which needs to find "men" to do its fighting.  Erm...doesn't EU law have a word to say about this?

And there goes Hollande, like Sarkozy, a sickening little wannabe Napoleon, committing terrorist acts in Mali and botching a raid in Somalia. Mmmmmm... figures. Let's be honest, what good is France militarily if not bribing foreign officials to accept its military hardware?