While the USA goes around the world expounding on the virtues of its way of life, it is obvious that those in charge place little value on human life. They are willing to kill thousands, even millions, for profit, for power, for money, for oil and resources. 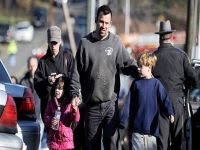 An inordinate amount of the national budget is put at the disposal of the military industrial complex.

The USA doesn't even value the lives of its own citizens.  Witness the numerous testing of weapons, drugs, medications, pesticides and what have you on the population.  This has been well documented in this space.

Also, it is one of the few developed nations that fails its citizens totally in the area of the right to adequate health care.  Those who cannot afford it, do not get it.  And I don't want to hear about the nonsense that people can go to an emergency room for treatment and not be refused...being given 100 dollar bandaids and then sued for medical care later on that the person was unable to pay for.

Another problem is the state's unwillingness to comprehensively deal with those members of society with mental illness.  All of a sudden the do-gooders (read cheap bastards) pontificate that the mentally ill have rights.

Then, without the capacity to understand how to care for themselves, they end up homeless on the street.  Begging money.  Being robbed.  Being beaten.  Being hungry.  Committing crimes because they have no self control.

The very few community placements they have such as group homes evict them at the first sign of trouble.  So why are they there?  It's ridiculous.

Then there are the families.  Sometimes the unfortunate families, not wanting their loved one on the street, keep them at home, not wanting them to be vulnerable to the hazards of the streets.  But the lives of these families are pure hell.  There is violence, destruction, threats.  Lack of cooperation from the mental health system or law enforcement when the person gets out of control.  The person refuses to go to get help, the family is stuck, the police will not do anything.

It's a good chance that the woman killed today had that sort of personal hell, that has now expanded to many other families.

The 20-year-old suspect in the Connecticut school shootings, according to a law enforcement official, killed his mother at their home Friday and then drove his mother's car to the school where he went on a deadly rampage.

Adam Lanza is dead from a self-inflicted gunshot wound.  Ryan Lanza, brother of the shooter, told law enforcement that his brother was believed to suffer from a "personality disorder" and was "somewhat autistic" and lived with the mother in Connecticut.  She taught at the school where the shootings took place.

So meet the mentally ill of the USA and victims of the many who go without treatment.  Meet more disposable people.  The politcal pundits and politicians then start a mantra about gun control in order to gain more control over the population.  It's not the guns, stupid!   It's the lack of care for your own people.

It is suggested that the USA gets its own house in order before dictating to the rest of the world.  Use the many blessings and resources of the land and people for your own people and not for trotting around the globe killing others for fun and profit while those at home suffer.  The capitalist system sees people as a disposable commodity, to be thrown out if not productive or useful in some way.  To be thrown out if blocking the wishes of the elite.  That's just not going to impress anyone to adopt the so-called "American Dream" which in reality is the American nightmare.  For its own citiznes and for the unfortunate citizens of the world who get in their way.