Beckham, football and the USA

Razzmatazz? Razzamatazz? From Pele to Beckham, the mesmerizing football hype which has the rest of the world spellbound every weekend is in the United States of America relegated to "soccer mums" taking their kids to "soccer practice" on Saturday mornings. Football in the USA is something else, soccer is a babysitter. Why? 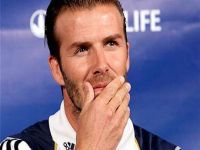 I choose the word "football" in the title aware that in the United States of America, "football" is not the same word as the one which has the breath of the rest of the world held every weekend and which has tongues wagging on Monday mornings as fans rib each other over the exploits of their teams, the more so when there is a "derby" match.

Curiously enough, this expression hails from the horse-race course of Epsom, Surrey, UK, where the earl of Derby sponsored the race between the country's two best horses, a race which was to take place yearly (and still does), the expression making a species jump into football (AsSOCiation football, as opposed to Rugby football, hence, SOCcer).

So after five and a half years of Beckhamania in the United States of America, are the States any nearer to adopting the game from the Old Continent? Not really, no nearer than they were to adopting it when Pele, arguably the best player the world has ever seen, went to New York Cosmos from 1975 to 1977. Thirty-five years ago.

And why? Why is soccer in the USA firmly in fifth place, at best, among the sporting venues, behind American Football, Baseball, Ice Hockey and Basketball, yet popular among kids as something to do on Saturday mornings (soccer school) and no more than that?

While we could go around in circles for thirty-five more years, and while David Beckham's personal investment in LA Galaxy augurs well for the growth of the game across the Pond (he is anything but stupid), the bottom line is maybe razzmatazz.

Razzmatazz? Yes. The hype that goes with sport on television, the flair for putting on a show and providing entertainment which is one of the strong points across the USA, and while the rest of the world demonstrates ever-increasing degrees of patience when presented with Champions Leagues, Europa Leagues, FIFA World Cups or UEFA Championships, the Cheer Leaders in the USA present a different package.

And how so? While soccer in the rest of the world has become a massification of stupidity, presenting "role models" who speak about themselves in the third person, as if they were talking about a phenomenon, often getting their grammar mixed up and presenting a wealth of phrases for a virtual Guinness Book of Idiots, in the USA seeing 22 men running after a ball, spitting at each other, kicking each other, insulting each others' mothers and fathers, is not that sexy.

US sport went through all that decades ago and came out the other side willing to present role models who could speak the lingo and make sense, contrary to the army of "soccer-speak, BELCH!" players elsewhere, talking about themselves in the third person like a three-year-old. "Jairton had a good game, he did his best so that the Mister chooses him next time to be part of the collective team, and his objectives are to win the games he plays in". Innit? BELCH!

This apart, calculate the time it takes to mount an attack in American football, in ice hockey, in basketball, and take into account the constant adrenalin rush endemic in baseball, and we see why soccer, with its half-hour periods of nothing, is and will always be, in the medium-term, a non-starter in the USA in terms of becoming the national sport.

That said, when the USA decides to pump resources into men's soccer (as it has done in women's soccer) then this country will probably be a contender for world champion in the forthcoming fifty years, or more, whether or not soccer becomes the "national sport".

Beckham for sure bears an influence and will take the sport to a new level in the USA but will he be more successful in elevating soccer to number one spot than Pele was decades ago?