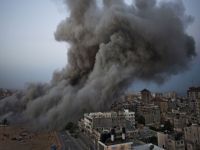 BULLSEYE!! A media tower hit, journalists pounded, babies slaughtered, yes ladies and gentlemen it's all there in Gaza today. Ten people were murdered Sunday in an Israeli terrorist strike against the home of a Gazan family and yes, children were among those murdered. Today a child, tomorrow a terrorist? Is that Israel's attitude towards children?

"Shoot the bastards in the eyes with rubber bullets". "Stand by giggling hysterically as a Palestinian woman dies during childbirth, saying one less bastard, one less terrorist". And the United States of America supports Israel's right to "defend itself".

"Defend itself"?? That's a good one. So a burglar enters your home, steals everything you have, pushes you out and then when you dare to fight back, he has the right to "defend himself"?? So what about the Palestinian homes bulldozed, what about the Palestinian families thrown out of their homes and thrown off their lands so that Jewish settlers can take over their property and build colonies on it?

What about the Palestinian and Bedouin graves and cemeteries desecrated by Israeli citizens? And Barack Obama says they have the right to defend themselves? Does the average US citizen have any idea how much of his hard-earned USD are going yearly to support the State of Israel to defend itself?

You cannot steal territory, build colonies on it then play the victim when the dispossessed fight back.