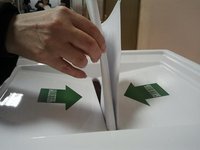 American teacher: Who are you going to vote for?

American student #1: (male--18 year old eligible to vote): I am voting for Romney.

American teacher: What is your rationale?

American student #1: It is unfair for Obama and people [sic] to pick on the upper class just because they are wealthy. I listen to my parents about these things.

American teacher: Alright, that's a reason. Do you know anything about national security and how it affects you? What do you think about Iran? What about the decay of many of our cities and towns in our country? How about the unemployed? What about those military personnel returning from Iraq and Afghanistan? I mean there are a lot of issues that you should consider when casting your vote whether it be for Romney or Obama. You can't rely solely on the easiest sources of information.

American student #1: Well, for unemployment, we can bring all the jobs back into the United States that were outsourced.

American teacher: Why would corporate shareholders want to pay more in labor costs? It does not make sense.

American student #1: Well, look, I am voting for Romney because it will be something new.

American student #2 (female-18 year old eligible to vote): I am voting for Obama because Romney wants to cut funding for the arts. Abortion is a matter for each woman to decide. Romney is not focused on our country's problems. I don't like his attitude. I do not know all the issues or much about the Iran situation except that it is not good. Really, they are not that much different. But Obama is my choice. Voting 'just for something new' is crazy.

Above is a record of a conversation with two eighteen year old Americans who will be casting their votes in the presidential election of 2012. A third student, just shy of her eighteenth birthday, was asked the same questions to which she said that Romney would be her selection because "it would be something new." All three students were sincere and passionate about their responses. So in this three person poll, Romney wins it 2-1. All three indicated that there was not much difference between the two of them.

Feeling the intensity of their political passions, and being in the presence of the future that is current youth, it was difficult not to feel some sadness for them possessing the knowledge that war plans are afoot for a terrible kinetic assault on Iran by the US, UK, Israel, and some form of international military coalition involving Saudi Arabia. Already, economic sanctions are crushing the Iranian people and the Iranian television outlet Press TV is being knocked off the airwaves by the European Union. United States' and Iranian leaders refuse to break out of their ideological fortresses.

The Iran matter coupled with record youth unemployment levels, debt (credit card, college), and a general feeling of boredom engendered by a non-substantive American culture, just adds to the gloominess of the times.

Why not vote for "something new"? It's a crap shoot. The new face alone is identified with progress/change and provides the impetus/rationale for a decision/vote, not a critical look at what's behind and below the face or the events/people driving the look of that face and the noises it makes.

Although making a decision based on appearance, gesture, voice and dress is a strong evolutionary trait, it is one that must be fought against mightily. The king makers/marketers are betting on a swift visceral evolutionary reaction that triggers a vote, not a critical assessment of the face, gestures and so on.

Slavoj Zizek speaks to this matter through the use a John Carpenter film. "When the hero of John Carpenter's 1988 They Live puts on a pair of weird sunglasses that he has stumbled upon in an abandoned church, he notices a billboard that once invited us to a Hawaii beach holiday now simply displays the words: 'MARRY AND REPRODUCE.' Ad copy on another billboard - this one for a new color TV - says, 'DON'T THINK, CONSUME!' The glasses, then, function as a device for the critique of ideology. In other words, they enable him to see the real message lying beneath the glossy, colorful surface."

With Zizek's description in mind the socioeconomic and cultural symbols of the American human terrain-and the noises emanating from the faces of American leaders and news readers--are really saying something like this: Let's kill and displace more young people, this time in Iran. A lot of our own young Americans have no future anyway and there is only so much we can get them to spend on clothes, travel and gadgets. So let's put 'em to work killing Iranian kids or converting them into American disciples. So what if Iraq and Afghanistan turned into hell holes. Iran will be different and we can combine that with a Syrian adventure.

Third time is a charm!

As the insanity for a kinetic war with Iran reaches a crescendo, and the justifications for failure in Iraq and Afghanistan reach their nadir, the International Crisis Group has already predicted the outcome of a war on Iran's turf. Simply replace Afghan with Iranian in the following passage (and consider the notion that in some distant future, some invading country might write the same about the USA).

"Today in Afghanistan you do not have a national army. You do not have a national police. A factionalized government can only create a factionalized army and police. It is not a question of ethnic balance; it is a question of factional balance. People in the army and police are fighting for their factions, not the country...Assurances from NATO and U.S. military commander's aside, there can be little doubt that levels of insecurity are likely to remain high, if not increase, ahead of the 2014 [Afghan] presidential election. With the majority of Afghan security forces unable to meet even the most basic operational benchmarks, particularly in the crucial areas of supply, logistics and air support, it seems highly improbable that they will be able to fill the gaps left by departing international forces by the time the campaign gets underway in earnest in late 2013.

Afghanistan's political leaders have a maximum of eighteen months to prepare for an election and ensure a smooth transfer of presidential power. Many key tasks must be finished much earlier, particularly regarding electoral oversight. Resolving both the long crisis over electoral administration and related constitutional disputes could well be the key to determining whether the current political system will survive the 2014 NATO drawdown. Failure in either would be a crippling blow to chances to generate popular trust in a regime already regarded as highly corrupt. The international community must realize this is its last best chance to leave a viable state in Afghanistan and mobilize accordingly."

And the outgoing head of the International Committee of the Red Cross in Afghanistan, Reto Stocker, had this to say upon his exit from Afghanistan. "I am filled with concern as I leave this country. Since I arrived here in 2005, local armed groups have proliferated, civilians have been caught between not just one but multiple front lines, and it has become increasingly difficult for ordinary Afghans to obtain health care...People are not just suffering the effects of the armed conflict. Hardship arising from the economic situation, or from severe weather or natural disaster, has become more widespread, and hopes for the future have been steadily declining."

Groan....Not again! It's near Halloween. A magic spell is needed to make the Human Terrain System (HTS) vanish.

The US Army, TRADOC, HTS still manages to suck up millions. Some say it is really a pension program run by those who are trying to shore up bank accounts. Whatever the case if HTS is still around it means that there must be dozens of programs just like it.

"I have stopped believing that someone will start asking questions about the Human Terrain System. This is fraud on such a massive scale, it defies description. HTS is extending almost anyone in country who wants an extension. The next HTS class is scheduled to start on or about 22 October. Something just doesn't seem right. HTS made it through the critical October 1st (new FY gate), and CGI got the $42 million contract. If they clear the January 2, 2013 automatic budget cuts, HTS will have eternal life, because [contractor] CGI will not let it die. There is a glut of people around, with no work, and none anticipated. There is nothing new HTS teams can learn in Afghanistan, but there are plenty of opportunities in Somalia, South Sudan, Turkey, Kenya, Guatemala, and the former Soviet Republics.

Personnel in the Human Terrain System have produced some graduate papers, a few scattered self-promoting articles in the Military Intelligence Bulletin, and a critical series of papers done by the American Anthropological Association. Other than that, HTS has been blessed to be able to fly well below the radar screen, despite its huge budget. There are a handful of publications floating around but they would probably have to be requested under the Freedom of Information Act. These include the HTS Command Climate Survey, March 2011; HTS Team Productivity Workbook, March 2012; HTS/CGI Contracting Specifications, August 2011; TRADOC HTS Audit Report, August 2011; and the HTS Budget FY 2011-2012

Some of the military commanders who made use of HTS have made some obligatory passing comments about how well their HTS team worked for them, but it is doubtful that they will show you anything useful their HTS teams actually did for them or any information that was generated by an HTS team that had any impact on any operation they conducted. That's not to say that HTS teams can't make a difference."