Hitler, England and the invasion of Russia 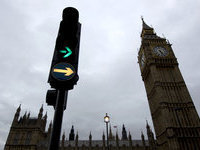 A few years ago, famous conservative and pacifist American writer Pat Buchanan wrote a book about Churchill and the unnecessary war. For him Britain hadn't to declare twice war to Germany and Hitler, for the latter was merely a friend of England, an admirer and protector of the British Empire and Nordic protectorates around the world. So why slap such a lovely friend?

There is a bar in Liverpool, full of unconscious tourists, where Hitler is said to have come before the war. I thought it was a joke but as jokes in our gossip-run world currently become reality shows, then reality... In the present conspiracy agenda, there is too the credo that Hitler was somewhat a British spy or agent during his youth! Anyway one of his most famous and platonic lovers was British beauty and aristocrat Unity Mitford.

As we say in French, there is no smoke without fire. And Hitler's attitude towards England remains preposterous seventy years after the most atrocious war in history.

I already mentioned the admiration of the tyrant towards England and America; he praises both empires and the Nordic countries of Europe; he despises reasonably Latinity, despite his Italian alliance, he hates France, he wants to destroy Russia (a great nation, though, he writes somewhere!) to rob her land and enslave her people, but he adores England and America, who have conquered so much land and submitted so many inferior people (he compared once his mission in Russia to the English one in India). The fact that Hess was from Egypt, Rosenberg from Baltic area, Baldur from USA, must not be underestimated. The pangermanist agenda was not even german: it was promoted by Germans of the outer, and we must remind that in 1900 Germans represent 10% of world population (2% today!) with no serious colony at all, no "country" of their own. Also, Hitler's minister of agriculture Walter Darré, born in Argentina, wanted to create a new race of landlords, physically similar to the eighteen century English gentry, for he inferiority complex towards England was even physical. Then Germany had to conquer land to copy her glorious models. Writes the future dictator in his jail:

When the territory of the Reich embraces all the Germans and finds itself unable to assure them a livelihood, only then can the moral right arise, from the need of the people to acquire foreign territory. The plough is then the sword; and the tears of war will produce the daily bread for the generations to come.

Freud spoke about Nazism of a "return to a barbaric prehistory". This formula is not even polemical: sometimes one can talk of Nazis without insulting them! Hitler has a prehistoric point of view about food, land, and space. He believes he lives in the times of Pharaoh, Arminius or Tamerlan. He believes Germany is starving, literally, and that she needs land to feed her people; there even is a poetic dream about growing oranges in poor Crimea. The mediocre Nazi goal is to re-create a civilization of ill-equipped peasants! This time it is Eisenstein who understands him very well in his masterwork Alexander Nevski, in which he shows his understanding of the dictator's madness, exposed in these epic lines:

If new territory were to be acquired in Europe it must have been mainly at Russia's cost, and once again the new German Empire should have set out on its march along the same road as was formerly trodden by the Teutonic Knights, this time to acquire soil for the German plough by means of the German sword and thus provide the nation with its daily bread.

Hitler is so fond of England that he even reproaches to the Reich his proud international policy of the beginning of the century. Germany must renounce her Weltpolitik! To seduce England, Germany must abandon trade, industry, fleet, colonial dreams, shipping, everything.

We can understand then why Hitler is so sweet during the war with England. In his attempt to destroy Eastern Europe, he wants to spare as much as possible his fabulous model turned into his worst enemy. He lets courteously British troops leave at Dunkirk, he never understands the strategic importance of Mediterranean, he delivers no troops to Rommel, he is unable to devise an air force against England or a conquest of this land, yet he persists in his absurd secret weapons which are the best anecdote of Churchill in his memories: the British PM wonders how much talent, money and time Germany has lost with this fantastic yet inefficient weapons! In every sense he wants to lose the war, since he doesn't want to destroy the hypnotic and mimetic British Empire. Last but not least, Hitler accepts the unthinkable, like our historians today: England did not declare war to communist colossus after his occupation of Poland! He should have known that English main agenda since Disraeli's confession and 1870 (French-Prussian war) is the destruction of Germany.

British Isles are not famous for their philosophers. Yet Hitler took from a British racial thinker the most barbarian theory to justify his cause of enslaving and depopulating Russia and Ukraine. I remind that American racists, even the hardliners (Stoddard or Grant), accepted the three white races, recognizing their merits, and that they didn't share the foolish view of English writer Houston Stewart Chamberlain about the inferiority of Slavic people. The lunatic view of Kaiser Wilhelm's ex-friend comes in these terms in his Foundations of the twentieth century:

Of the genuine Slav there is less to be said, since we are at a loss where to look for him, and are sure of only one thing, that in his case there has been a transformation of the type...In the wide districts of Eastern Europe we must also presuppose a special, probably Mongoloid race, to account for the specific deformation which so rapidly transforms the majority of the Germanic Slavs into inferior "Slavonics."

The "great thinker" cannot explain scientifically how Slavs become Slavonic then mongoloids. Of course this original view justifies genocide. And when Belgian fascist Degrelle gets with his troops to Kiev and Ukraine, he merely discovers "beautiful and fair people", not tartars or Mongols, while other scientific observers assert that Ukrainian women are more resistant and healthy than the Germans! There was so no need "to extirpate Asiatic influence on European cultural life." But the nihilistic mania of the philosopher, born in a famous family (Neville Chamberlain justified and supported before Munich the German views regarding the Sudetes) was on everybody's mind in Germany.

And, as remarked American scholar Stoddard who travelled to gloomy Germany during the beginning of WW2, the national-imperialists presently seized upon race teachings, and prostituted them to their own ends. A notable example of this is the extreme Pan-German propaganda of Houston Stewart Chamberlain and his fellows...To any one who understands the scientific realities of race, the monstrous absurdity of these assumptions is instantly apparent. To let Teuton propaganda gull us into thinking of Germany as the Nordic fatherland is both a danger and an absurdity.

The danger came later: the second Peloponnesian war (to put it in Stoddard's words) and the destruction of land and people in a good prehistoric way: massacres, starving and slavery. Hitler's anti-Semitism was criminal but common; yet Hitler's racism was both criminal and heretical. The fuehrer should have read better Madison Grant: As in all wars since Roman times, from a breeding point of view, the little dark man is the final winner. And his racism killed sixty million whites. May we say that the worst racism in history has clearly been applied against the whites? By the end of the war anyway, the pure-bred SS assaulting Russia were a multiracial army of lost rascals from thirty nations!

Here we touch on the most important question of the last century: the German-led wars against Russia. Bismarck wanted to be friendly with Russia, like Prussians prior the creation of the third Reich. After WW1, Weimar and bolshevists were quite friendly, and of course Stalin preferred a cold alliance to a hot war with Hitler, letting him destroy bourgeois democracies of the west. In Russia, since the pacific colonial episode launched by Tsarina Katherine, there had been rather good relations between communities, even when Russian and Ukrainian writers mock the slow German (we did the same in France until the Blitzkrieg!). And suddenly, with the demographic and industrial growth of Germany, the feudal and prehistoric complex comes back, served by Hitler's insanity, of course, but also by the greed of landlords and Junkers like infamous yet prestigious general von Manstein who wanted his piece of land in Crimea, where his troops committed innumerable crimes.

Whether or not 10,000 Russian women collapse from exhaustion while digging a tank ditch interests me only in so far as the tank ditch is completed for Germany...

Everybody knows Marx's sentence about the comical repetition of history. Hitler repeated basically Napoleon and Kaiser Wilhelm's mistakes except that with Nazism the repetition was not comical but more tragic. Basically, Hitler's story is that of the guy who chooses the wrong model and tries to murder a good friend. And stupidly, he repeated the Kaiser's mistakes and crimes. A great mind had predicted that burst of madness and the way to prevent it.

But Germans want strangling all the same. Though they are so good at science and learning they must be strangled.'