Whoops, Washington! Your "Dictator" has been democratically elected again in Venezuela. Jolly embarrassing, eh? And now what? A message of congratulations, or a Condy-type scowl followed by the most democratic of coups, you know the ones which install friendly repressive Fascist regimes which slaughter hundreds of thousands of civilians? 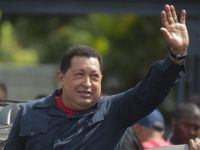 Not bad for a "dictator" as Washington has claimed. By investing in Venezuela, creating new infrastructure and investments in the country's economic powerhouses (petroleum industry, manufacturing industry, agriculture, mining) and in innovative cutting-edge areas such as science and technology, research and development facilities, creating in turn opportunities, Hugo Chavez has not only turned Venezuela around, he has laid the foundations for the exportation of the Bolivarian Revolution to other countries held down by the yoke of Fascism.

Let us examine a few shining examples of the Bolivarian Revolution: reduction of extreme poverty from nearly 50% to under 10%. In 14 years. For Washington, of course, this is the work of a "dictator", which merited a failed coup d'état in 2002 which threw the country into turmoil and set it back, economically, some five years. Hugo Chavez reduced general poverty by seventeen percentage points in ten years. For Washington, that is "dictatorship".

The Human development Index of Venezuela rose from medium to high development, Venezuela is officially free of illiteracy (what "dictator" educates his people, for free?), investment in education has doubled, the Technology Literacy Plan has helped to link people to the new infrastructures in the areas of scientific development and IT, unemployment has decreased by 50 per cent, the minimum wage has risen to around 400 USD, workers receive a monthly food subsidy, pensions are indexed to the minimum wage, basic food products are distributed directly to the people for low prices without the hand of intermediaries and as a result, agricultural produce was increased substantially, creating jobs in rural areas, and for those who accuse Chavez of squandering money, Venezuela's international reserve fund has quadrupled.

The launching of Venezuela's first satellite has created tele-medicine and e-learning programmes for millions of people not only in Venezuela but also in Latin America and the Caribbean.

Now we see what Chavez stands for, let us have a look at Washington's recent history? Shy-rocketing unemployment, the economy spiralling out of control, families losing their homes, further education inaccessible for the poor, rising poverty, rising illiteracy and abroad? Concentration camps, torture, illegal imprisonment of detainees, sodomy, urination in food, sleep deprivation, water-boarding, setting dogs on people, humiliation, invasion of homes, murder, support of terrorists, overthrow of legitimate and sovereign governments so as to seize resources and instal Washington-friendly regimes.

Now if one state needs a coup d'état, it certainly isn't Venezuela. However, watch your back, Comandante Hugo! You have seen what they are capable of...