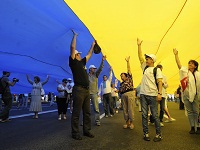 I am remarkably un-concerned with the current United States presidential election in as much as both candidates will pursue the same Trotsky inspired concept of permanent revolution abroad.  What does concern me, however, is that the upcoming election in Ukraine is being distracted using the same tactics used in the West.  This isn't a surprise; the West pours tons of money into trying to buy Ukrainian elections.  Still Ukrainian patriots have to see this tactic for what it is before they sink completely into zero sum politics which let the elite in the west manipulate elections there.

Four years ago in America, not for the first time, the tactic of changing the issue to something useless was used.  With two large-scale land wars the standing party tried to change the topic and ignore the real issues affecting people.  Issues like abortion were used to deflect from what was hurting America at the time; a financial crisis caused by over reliance on the self-governance of wealthy banks. The banks got help under both the incumbent president and his successor.  Soon Americans will go to the polls again but with rising inflation for nearly 8 years in gas and food prices the race is being hijacked by issues that don't matter. Whether gays marry or not, Americans are looking at higher heating bills, higher bills to go to and from work, and higher bills for food.  Yet the parties are happy trying to make these issues critical because they know they have no intention of stopping the wars, reeling in the banks, or addressing the growing cost of living for average Americans.

Unfortunately Ukraine's admiration of Americans must somehow have allowed the same foolishness to prevail there.  The Ukrainian language is important and certainly an issue. However, with still large actual unemployment (as opposed to the small number that only includes the few people that work legally; noting that if it wasn't so hard to acquire a Ukrainian INN maybe there would be more legal workers and more tax payers), and numerous economic issues prevent Ukraine from capitalizing on the many resources and many skilled workers it posses, none of these issues are being addressed.  Every party save one is focused on being more 'Ukrainian' by struggling to put as many 'Ukrainian' words into ads, and suggesting their competitors don't care about Ukraine because they don't care about Ukrainian language.

To me it is also amazing that any self-respecting Ukrainian patriot can demand the use of Ukrainian mova when the word mova is NEW to the Ukrainian language, added during the Polish influence on the Ukrainian language when Ukraine was transferred to Polish administration during the Polish-Lithuanian commonwealth's control of Ukraine.  What patriot would admire using the syntax of oppressors?  It is already sad that language is being made an issue when Ukraine has tons of REAL problems but to make speaking foreign words patriotic is the biggest insult the foreigners pouring money into deflecting from Ukraine's real problems, so they can profit from them, have deliver.

Ukrainians going to the polls have to see this distraction for the cheap foreign insult that it is.  Patriots of Ukraine, and it's language should be less concerned with Russian being a second official language than with making sure their actually speaking the language their ancestors did.  Regardless of their position on language patriotic Ukrainians should be telling pensioners to turn off misleading ads suggesting that there are massive amounts of pensioners being put out of their home by the government, because listening to public channels all that one can see is that there are no job, rich people with golden toilets, and attacks on the Ukrainian language.  Unlike the ad-speak Ukraine can prevail with or without using polish words like mova, but it cannot prevail with western bought politicians looking to export all Ukraine's resources and keep Ukrainians poor, and mislead enough to debate non issues while they manipulate the real ones to their favor.

George Green has been a Journalist for Technology, Financial, and Political Publications since 1997 and lives near L'vov Ukraine