The Portuguese government has just announced an income tax increase of 3.4 per cent across the board, applicable to the private sector, public sector and pensioners. This is the reply to the massive demonstrations of the last few weeks when one tenth of the population turned out to say No! It is a clear sign that in its pig-headed arrogance, the Government is not listening. 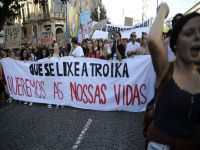 Here is an example of the incompetence of the Portuguese government, a coalition between two of the three parties (PSD, Social Democrats and CDS/PP, Christian Democrats, Conservatives; the other is the PS, Socialists, in name) that have led and managed Portugal so ably since 1974 that the country is now ruled by foreigners who implement policy through blackmail.

The way it happened was like this: Portugal was not prepared to enter the European Economic Community back in January 1986 yet had it been properly managed, its backwardness after forty years of small-mindedness could have been surpassed. It was not. Successive Prime Ministers and governments from the three parties mentioned above managed to watch rivers on money slip through their hands, governing from a party political and personal interest rather than by national consensus.

In the absence of a national plan (the plan is for many to get re-elected so that cronies and party whores can get into positions where they can siphon off public funds) the pendulum swung two ways in waves of orange (the colour of the PSD) and pink (PS). Each wave blotted out the programmes of the previous administration, idiots and incompetents were placed in positions of responsibility (one remembers a certain Minister of Agriculture in the Government of then Prime Minister Anibal Silva who took office stating "About agriculture, I understand nothing" and who was unable to read aloud a simple figure from a page).

The result was that the European Community, as it was by then called, and later the European Union, rubbed its hands in glee as those who were elected to lead Portugal sold off the country's interests, destroyed its agriculture, industries and fisheries, failed to understand Portugal's strategic interests, rolled over, lowered their pants and gave away for free the few assets that this medium-sized European country had to its bed-partners. As we speak, there are rumours of plans under way to donate part of Portuguese airspace to foreigners, depriving Portugal of millions of Euros in income. One wonders if they will give the newly acquired maritime space to the Spanish for a song and a dance. Or a bank transfer.

And the way it works today is this: On September 11, the Government had the audacity to announce these measures, shortly before a soccer match: Civil Service: One subsidy (equal to one salary) cut; 7 point increase in Social Security contribution; Pensioners: Cut of two monthly pensions; Private Sector: Increase in Social Security contributions by 7 points. There ensued a demonstration of one tenth of the population of the country.

The "Government" looking like little boys caught stealing apples, said little or nothing, went to Brussels crawling around the legs of the IMF, ECB and EC and now on October 3, come up with this plan: Civil Service: Cut of one subsidy (one salary); increase of 3.4% in income tax; Pensioners: Cut of 90% of one month's pension and increase of Income Tax by 3.4%; Private Sector: Increase of 3.4% of Income Tax.

This means a basic taxation of 19.9% in income tax and a further 8% in Social Security contributions.

With some of the most miserable salaries and pensions in Europe, and skyrocketing prices in utilities and food, this Government will without doubt reap what it, and its predecessors, have sown. It is not the fault of the Portuguese people that successive governments destroyed the country and overspent with irresponsible financial management and therefore it is not fair that the Portuguese people pay.

If the European Union got Portugal into this mess by financing it to destroy its economy, then either the European Union gets Portugal out of it, or Portugal should consider getting out of the EU, refinancing itself through bilateral agreements with other international partners, strengthening its economy through ties with its historical space (the CPLP community), using its own currency as leverage, pumping money into the economy to enable it to breathe and grow. Creating jobs creates fiscal revenue and lessens the burden on the State.

As far as Portugal is concerned, from Europe there were only ever bad winds and bad marriages, as the saying goes (nem bons ventos, nem bons casamentos) and if this country spent 500 years finding other solutions overseas, then once again history has repeated itself. The EU solution is a country destitute, bankrupt and economically totally unviable, its people trodden into misery, ruled by foreigners and incompetent academics who belong behind the walls of their Universities, hopefully doing research and not teaching students. And not destroying Portugal's economy and donating its resources to outsiders.

There are alternatives, and the alternatives do not steal money from the pockets of the citizens: surcharge on financial transactions, now; surcharge on large companies with turnovers of over 12.5 million EURO per annum; surcharge on the distribution of dividends; further combat against tax evasion.

These alternatives the Government apparently has not considered, except for the announcement that eventually Portugal will follow the rest of Europe in implementing the Tobin Tax, as yet a nebulous promise to tax financial transactions. What are they waiting for? A one per cent tax on financial transactions would provide enough money to exonerate the citizens from the vast burden of taxation they pay.

Once again, the Portuguese government panders to the whims of foreigners, kicks its people in the teeth and when they complain, urinates on top of them from its pedestal in an attitude of pig-headed arrogance and utter incompetence.

Will the fools governing this strip alongside the Atlantic please, for once, listen:

1. Portugal's strategic space is not Mediterranean, it is an Atlantic country and its focus should be on the CPLP, the space it dedicated 500 years to;

2. Portugal's assets belong to the Portuguese citizens, not a handful of spoilt brats sitting in positions of power; they are not to be sold to foreigners, they are not to be given away. If you are incompetent to protect them, then give way to someone else. If you destroyed them purposefully, then you are traitors;

3. Do you seriously think that the miserable salaries and pensions your people earn can withstand even a one percent hike in fiscal surcharges? Has any one of you ever held a spade in his hand and had to scratch a living from a strip of land and half a dozen chickens?

4. Why do you consistently refuse to speak to your people and run to Brussels negotiating their salaries and futures away?

5. Finally, to the mentally advanced illuminated ladies and gentlemen, for want of a better phrase, controlling the citizens' finances, even an idiot knows that government via Excel sheets doesn't work, babe! The more you tax people, the less revenue you get, because the less money they have to spend, the less jobs they create, therefore the less revenue you get and the more you have to spend on subsidies.  Those of you who spent their entire lives studying and teaching and still haven't understood what is a basic fact, then with "Ministers" like these running the country, who needs to go to the circus at Christmas?

What to expect from a half-assed bunch of demented simpletons who have the mania the sun shines out their posteriors, knowing nothing at all about anything, never having done a single day's work in their miserable lives, and who call the Portuguese "cry-babies" (piegas), ignorant, or say they don't want to work? The answer: Social terrorism.