What has happened in Portugal over the last year can be described in two words: Social Terrorism, the antithesis of Social Democracy. The translation of this is the march of one million people across Portugal two weeks ago (one tenth of the population) and yesterday's rally by the Trade Unions which filled Lisbon's Praça do Comércio. 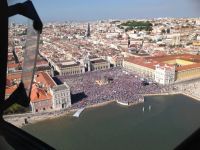 The background to the catastrophic situation in Portuguese society is very clear and simple: bad governance by the only three parties in power since the Revolution of 1974, namely the PSD, CDS-PP and the PS (Socialists, in all but name). These three parties, particularly the PSD and especially under the leadership of the current President, Aníbal Silva, did little or nothing to improve Portugal's competitiveness, did virtually nothing to restructure Portugal's economy without its colonial provinces (Angola, Cape Verde, East Timor, Guinea-Bissau and Mozambique).did absolutely nothing to prepare Portugal for the European challenge.

In fact, these governments have destroyed the few tools Portugal had, selling off industries, destroying its agriculture, grounding its fisheries, as the Prime Ministers had orgasms when the European Union patted them on the Head and called them good students. It was a question of seeing which one of them rolled over and lowered his pants the fastest, as Portugal's assets and future were sold off. Social Terrorist strikes, affecting the present and the future.

Welcome to social terrorist government by Excel sheets, where the bottom line totally ignores the human and social cost of policies implemented by professional politicians who have never done a proper day's work in their lives, who have no idea about the reality of the people and who have never had to place food on their table at the end of the day living on a miserable pension, an average Portuguese salary or living with the spectre of unemployment hanging over their homes.

Social Terrorist Government by Excel sheets tells the policymaker that the average salary in Portugal is around 1,000 Euro. Even if this were the case, which it is not, let us examine the expenses of an average household: in Greater Lisbon, I would defy anyone to present a modernised rent payment scheme of less than 400 Euro, and that is an absolute minimum. Telephone, Internet and TV package: 70 Euro; Gas and Electricity, 40 Euro each per month; Water 25 Euro per month; Transportation: 35 Euro per month per person; Taxation 24.5% (245 Euro), leaving a paltry 145 Euros per month to eat for a one-salary family. With two breadwinners, the cash available rises to 865 Euro on this Excel sheet.

So, the Excel sheet tells the inexperienced blockhead who thinks this is a mirror of the socio-economic reality in the country that to raise more taxes, the "average" family will support an increase of Social Security Tax (TSU) from 11 to 18%, as the Prime Minister, Pedro Coelho, recently announced, cynically before a soccer match was due to begin. The Excel sheet does not say that if the average salary is 1,000 Euro, that does not mean that most people earn that amount and so these sorts of measures are insupportable and unbearable for the majority of the population.

That any government can announce such measures, and then recant after a tenth of the population turns out on the streets and remain in power, defies logic and this is the background to yesterday's demonstration in Lisbon, organised by CGTP-IN, the main Trade Union movement in Portugal, which filled Praça do Comércio, the main avenues leading down to it and Rossio Square above these.

The demonstration was a double-edged victory: if it proves that the people are still massively engaged in combating the Social Terrorism of the PSD/CDS-PP, it also provides a platform for alternative measures to be proposed, something the PSD/CDS-PP government refuses to accept, hiding behind a "no alternatives" discourse.

The proposals to alleviate the effects of the government's social terrorism are simple and clear: the creation of a 0.25% tax on financial transactions, generating an additional 2 bn. Euro; the introduction of a progressive and indexed Company Tax of 33.33% for companies with a turnover greater than 12.5 million Euro, generating a further 1 bn. Euro; a surcharge of 10% on dividends (generating 1.6 bn. Euro) and further policies against fraud and tax evasion (1 bn. Euro). Total: 5.6 billion Euro, a socially responsible alternative to the social terrorist policies of Portugal's government, which in the eyes of the world has lost its right to govern.

The response of the Government and its advisors has been deplorable, calling the Portuguese people "cry-babies" and "ignorant" while the fat-cat lobbies which gravitate behind the Government allegedly grow fatter and the citizen is smashed into the ground. Every single government in Portugal since 1974 has taken office with the words "We are going to ask the Portuguese people to make sacrifices", then proceed to implement policies which serve the owners of the capital, reducing the workers to slavery, misery and today, hunger.

What a disgusting political epitaph for these three parties which have led Portugal, a medium-sized European country, into the gutter, managed by foreigners who do not have any idea at all about the reality in the field. The Portuguese people, protected by the political Left, have once again discovered the power of People Power, an invincible force against the Social Terrorism implemented by the political Right. If they know how to use it, of course.