UN Secretary-General Ban ki-Moon stated in his address to the LXVII meeting of the UN General Assembly that this is a time of turmoil. He refrained from saying whose fault that is. What he did say is that the world is in a race against time to save itself, and ominously, time is running out. A mixture of empty words, piss and wind, and wisdom. 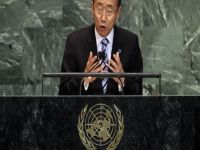 These were some wise words from the UN Secretary-General, from whom one has become accustomed to hearing a lot of hot air, meaningless clichés of the type bandied around by Eurocrats and that band of incompetent politicians, not good enough to make the grade at home or remain in their jobs, but just good or connected enough to enjoy a comfy lifestyle in a supranational organization, such as NATO, the EU, the African Union or some other non-elected position which spends the taxpayers' money.

For once, Ban ki-Moon hit the nail on the head. True, as usual he didn't go far enough and name names but then again, he wouldn't would he? True, he didn't address the main issues facing humankind but he did make some interesting noises about time running out for the human family, about the vast amount of money being spent on weapons instead of development, about the impact of climate change.

What he did not refer to was the fact that the Organization he presides over is as potent as a leprous, squashed, syphilitic, visually impaired slug with severe cerebral palsy, lying under a hundred tonnes of salt, for it does not have the clout to even defend its own Charter, it does not have the wherewithal to uphold international agreements, contracts, covenants and conventions and as far as crisis management is concerned, increasingly serves as a rubber stamp for NATO in general and the FUKUS Axis (France, UK and US) in particular, as we saw in Iraq, as we saw in Libya, as we see in Syria.

At most, the UNO, as a tool for crisis management, calls weakly "Stop!...please?" from the sidelines and in practical terms, does nothing. It hasn't even tried any NATO leaders for war crimes committed in Iraq, it hasn't accepted the indictment written by this author et al (*) against NATO for crimes in Libya. Until the United Nations Organization can implement one set of weights and measures in the international community, equally, and for all players, then it has no moral right to decide on anything.

As a humanitarian umbrella mechanism which coordinates networks protecting human rights, cultural heritage and so on, it is excellent and does a very good job. Perhaps the UNO should take a look at its own navel before opining on the rest of the world and the sovereign nations it has failed to protect from the bullies in the international community who pander to the whims of the lobbies that control them and do not abide by the norms of international law.

A new commitment should be drawn up, based upon the previously defined lines drawn under the Helsinki Agreement and those countries guilty of crossing those lines (NATO/FUKUS in each and every case) should be punished. The notion that anyone is above the law is an insult to humankind.

Secondly, the flagship conflict - that of the Middle East - should be solved definitively and firmly and that means someone having the courage to stand up to the hawks in Israel, which do a huge disservice to the Jewish people and nation. Either Israel lives within the boundaries which it was assigned in 1948, or... there is no alternative. This means pulling out of lands occupied illegally since 1948, or else paying a rent for their use during a phased withdrawal. It could also mean establishing Jerusalem as an international city which belongs to everyone and nobody at the same time, and how about placing the UN building there as a token of goodwill?

With such a monumental first step, the climate would be created for humankind to solve the other problems one by one, in a climate of togetherness, a fraternity of nations enjoying common values but at the same time, cultural diversity and that includes the right to systems and forms of Government which are different from western (corrupt to the core) "Parliamentary democracies" which are in fact no more than dictatorships run by the elites.

Let posterity and the history book judge where we are and what we have become, and to see if I am a dreamer...but I am not the only one.