An attack killed four Americans at the U.S. Consulate in Benghazi, eastern Libya, the terrorist capital of a terrorist network that was aided and supported by the FUKUS axis and NATO.   The attack is likely to have been planned by extremists and inspired by al-Qaeda, their very own proxies in the war against Muammar Ghaddafi that commenced this past March.

The U.S. Ambassador to Libya, J. Christopher Stevens, and three other Americans were killed Tuesday in an assault on the U.S. consulate.  Stevens is the first U.S. ambassador to be killed in 33 years.

Many Muslims were enraged over a film made by an Israeli living in the U.S. that insulted the Prophet Mohammed.  This outrage that also resulted in attacks in Egypt was first thought to be the reason for the attack.

However, the anniversary of 9-11 may also have been what set off the extremists.  The demonstrations against the low budget film likely served as a cover for attackers.

A group of several dozen armed men mounted the assault in 20 to 30 cars driving toward the consulate shortly before 9:30 p.m. Tuesday.  The attack involved the use of a rocket-propelled grenade and followed an al-Qaeda call to avenge the death of a senior Libyan member of the terrorist network.

U.S. embassies worldwide are now on alert for other possible attacks.

Secretary of State Hillary Clinton made the following statement:  "As the conflict in Libya unfolded, Chris was one of the first Americans on the ground in Benghazi. He risked his own life to lend the Libyan people a helping hand to build the foundation for a new, free nation. He spent every day since helping to finish the work that he started. Chris was committed to advancing America's values and interests, even when that meant putting himself in danger."

President Obama strongly condemned the attack and pledged to bring the perpetrators to justice, vowing that "justice will be done."

Republican candidate Mitt Romney put his foot in his mouth with his statement saying, "the Obama administration was wrong to initially sympathize with those who waged the attacks.  I'm outraged by the attacks on American diplomatic missions in Libya and Egypt and by the death of an American consulate worker in Benghazi. It's disgraceful that the Obama administration's first response was not to condemn attacks on our diplomatic missions, but to sympathize with those who waged the attacks."

He who fails to learn from history is doomed to repeat it.  The U.S. employed, armed and financed al-Qaeda in Afghanistan against the Soviet Union.  The 9-11 attacks were attributed to that same al-Qaeda.

Not having learned from that experience, the same terrorists they employed, armed and financed in Libya to overthrow the government of Libya have now begun to attack and repay their own sponsors once again.  Perhaps Mrs. Clinton and Mr. Obama should reflect on thier ill-advised alliances and behavior in Africa and the Middle East and cease the arm twisting to make everyone bend to their demands. 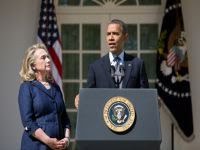