The victims of 9/11 are not only encountered in New York. The victims of 9/11 lived in Afghanistan, in Iraq, in Libya and today, in Syria, campaigns created and wars waged on the back of the most shocking example of the manipulation of fear in the history of humankind. 9/11 was an insult to the memories of the deceased, an insult to their families. 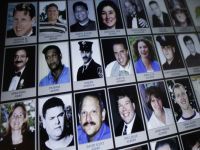 The anomalies of the 9/11 attacks have been ably exposed by researchers over the last eleven years, since two aircraft slammed into the Twin Towers just before they appeared to be demolished in a classic implosion operation, since an "aircraft" turned the Pentagon into the Quadragon, yet leaving the lampposts through which it had to pass standing, and before another aircraft allegedly vanished...all 200 tonnes of it, including engines.

If wreckage of the Air France 447 was found at sea, then it is totally impossible that an aircraft of similar size hitting terrain would simply vaporise. That two plus two do not add up to four in the 9/11 attacks does not attenuate the suffering of those who lost husbands, wives, children, family, loved ones and friends, taken away in a snap, making their loss that much more shocking and difficult to deal with.

This is where our thoughts should be this day, eleven years after the United States of America and its allies were given a carte blanche to go globe-trotting on the back of a massive public opinion coup, justifying invasions, justifying massacres, justifying the most blatant outrages against human rights and international law. This is unfortunately the legacy of 9/11.

The legacy of 9/11 is the creation of a geo-political monster, as the FUKUS Axis (France, the UK and US) cynically took advantage of this stunt to justify their wars pandering to the whims of the lobbies which close ranks around each and every US President, eliminating those few who do not play ball.

On the back of 9/11 came Afghanistan, a hopeless waste of time and money and more importantly, human lives, a process which is on-going today, a process which has continued the destabilisation of a once-stable and socially progressive country by the Mujaheddin, unleashed by the CIA and the Pakistani Madrassah against the legitimate Government. The Taleban are a CIA experiment gone wrong. 9/11 was the ensuing thank-you note.

On the back on 9/11 came Iraq, an illegal invasion against a sovereign nation outside the auspices of the UNSC, rendering Bush and Blair liable for war crimes trials, a process which is already under way and which will hopefully see both of them spend a substantial period of time behind bars, yet not facing the sort of treatment their forces meted out to prisoners in concentration camps and detention centres, however much pleasure it would give one to water-board both of them.

On the back of 9/11 came Syria, a country invaded by terrorists, a country whose latent ethnic and religious differences were whipped up by outsiders, where groups of terrorists were armed and unleashed against the Government. The process started before Libya, it continues to this day, the FUKUS Axis yet again spreading misery and terror in their quest to place their minions in power to further their demonic plans for geo-political hegemony.

Why? Because Muammar al-Qathafi's plans for Africa were threatening the lobbies which control the FUKUS Axis. It was not for no reason that the Libyan leader was to receive a UN Humanitarian Prize in 2011.

The legacy of 9/11 is therefore its consequences: torture, rape, murder, illegal detention, war crimes, atrocities, sodomy, urination in food, sleep deprival, setting dogs on detainees, terrorism, ethnic cleansing, racism...the list goes on and on and on and reads like a shopping list for Satan.

And this, ladies and gentlemen, is an insult to the victims of 9/11 and their families.