The state of Christianity in France...is horrible 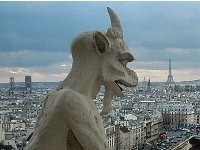 I was asked to comment the state of Christianity in France. I hesitate to talk about it, for there are so many experts, but after all I have always written for years in various Catholic magazines, quite marked by Tradition and the refusal of materialistic modernity! Many members of these Brotherhoods have a large family, a late French exception, and they are right to have it. The family is the only state that creates and loves its citizens, says Chesterton, and it seems to me that the Christian family is the last kingdom of freedom and real life (in the very meaning of Rimbaud) in a post-human World embalmed in the culture of death and his sarcophagus nonsense festivity.

The state of Christianity in France ... With the exception of the traditional community and its numerous families, I find it horrible and I asked my friends like permission to speak. Some will find that I am exaggerating, that everything is better, even with thirty times less priests ordained per year than in 1829. Priests have more than 70 years on average and it remains as 400,000 practicing Catholics in France, a number of them reading compulsively the newspaper la Croix, one of the old pillars of the consent fabric. A lot of Christian journalists have preferred a career in television to a place in heaven! And now they illustrate what a famous columnist Claude Imbert named ten years ago the temptation of ostrich. I quote:

Facing this disappearance (of Christianity), the temptation of the ostrich. On the one hand, atheists, agnostics ... on the other hand, many Christians alike contest its importance as their faith convinces them that "if the seed dies", it is an eclipse provisional. They mock the "cliché of decline" and trust the perennial persistence of the Church, the pope, a fearless and greener Messianic Christian message'.

And think that when the text was written, in 2001, there still was the so popular polish pope!

We believe what we want, that's the Christian problem in modernity, for we no more believe what we must. We have been secularized. Both optimistic and pessimistic are fools, said Bernanos, author of a famous pamphlet on Spanish civil war, who mainly in his lifetime denounced the modern rallying to bourgeois democracy of the large Catholic bloc, who by spiritual cowardice, comfort taste, and fear of communism, came to sit at the banquet of science, equities and radio-television logorrhea. The French Catholic bourgeois support so the Judeo-something American world where we no longer speak of Christ (find him in an American movie) but a God promising material rewards. See Marx about American Christianity: The god of practical need and selfishness is money. This Catholicism of the End -a boring one- has also submitted itself to the dictatorship of the so-called human sciences. It thus has contributed to distort the heritage of scholastics, submitting its skills to the reign of the Market of religions and social sciences. And so religion becomes a detail of daily life.

I assume: I came to Catholicism through the voice of Christian polemicists, that of Bernanos already appointed, that also the "idiots' hunters" Leon Bloy and great English Chesterton, who said that modern ideas were Christian ideas gone mad. Neither the humanitarian and whiny Christian nor the satiated bourgeois is therefore nothing new for me. He already revolted my illustrious predecessors.

Depletion of Christianity in France is an old phenomenon, dating back more than three centuries, accelerated with the great transformations of the postwar period. But already the Persian Letters of Montesquieu sound the death knell of Christianity millennium: "The Pope? An old idol that we routinely praise! "Swift said already a year before, in 1720 that Christianity was dead and that he agonized to know what will replace it! Then Chesterton stated in a famous phrase that since man no longer believes in God, the problem is not that he believes in nothing, the problem is that he believes in anything! Chesterton already sees the 1900 eruption of chauvinism, global cruelty and imperialism (via diamond Boer War), scientism, humanitarianism, vegetarianism, everything we want. He predicted the arrival of the New Age, he almost reached Satanism which strikes today at our door, at our screen, in all dimensions.

Harry Potter saga, video games, war witchcraft, books full of monsters or ogres, pornography on the web, degenerate behavior and once banned looks (shaved head, tattoos, piercing, mutilations formerly signs of slavery), omnipresent occultisms and consultations of social future, everything is there to confirm the prediction of Tocqueville that democratic tyranny would spare the body to seize the soul. And those who have never read the Fathers of the Church pretend to convert to Buddhism, Cabbala, Shamanism or some New Age junk.

Some have claimed that the Church did not cause the collapse of spirituality, but she suffered it. It is right and wrong. In this money-driven world, the new bread and circus area, he Church has the right to suffer; she has no right to resist. From this point of view it is as we all face the tyranny of markets, rocket technoscience and American wars. We suffer, and we are forced to do so because we are in global democracy, ruled by new enlightened autocrats! And if the pope makes a remark about the condom, he pulls out a global uproar and provokes charges of pedophilia. If a bishop is concerned about Islamic immigration and aggressive behavior in Italy, everyone goes upset, and asks for more multiculturalism in society.

The Church is often resigned to suffer because it would be even more destroyed or vilified by the ruling ideology and its attorneys. The Church and the Christians are then inhibited and submitted. This official terrorism is already old in the West, it is bound to Voltaire and philosophical sect, it dominated the nineteenth and of course the twentieth century. The clergy then takes care to select only the elites or rather its executives according to the reigning new world order, as all of the political class. He convinces himself to be the enemy of truth, science and progress, as sect leader and wizard Sigmund Freud once stated, inventing one of the worst pseudo-sciences of anytime. That's why the low-clergy is in France less resistant and resigned to the powers of the time, while the higher clergy is obsessed by the politically correct fatwa. There is the resigned clergy or staff that provides playful flocks of ostriches we talked about earlier.

I do not want to let go these ostriches. For there is the Enemy and there are Christian cowards already underlined by Chrysostomus and the Fathers of the Church. And modern Christian mediocrity is rebuked not only by Christian polemicists but also by the atheist philosopher Feuerbach, who had designed the profile of the new Christian:

He is apparent, illusory, with just speech and nothing action, so out of ideas and customs, its representatives scholars and officials do not know or just do not want to know what it means.'

In the same tone Nietzsche speaks half a century later of priests turned into liars and actors. Atheists are exasperated to have fallen on false Christians or sheep turned into good players of modernity and Americanism! And yet we agree with them! Of course people like Peguy or Bernanos had seen the danger, especially in France, of such a demonstration of pseudo-Christianity. But have they been heard?

Speak clearly. Christ came to earth to liberate the Jews and the Gentiles of the money changers and the scribes. Now we live under the dictatorship of the markets, mind-controllers and economists, scholar, sex-gurus and genetic scientists. Christ rebelled, he was violent with the money-lending entropy, our debt culture (the credit instead of the credo, as Marx pointed) and he was killed for that. If we had a spark of energy, maybe we could save the world, if we were real Christians, not mundane actors. Basil said that cowardice is far worse than wrath.

In a world that is no more Christian, and that hates the remains of Christianity (as wrote Solzhenitsyn, the more czarism was tolerant, the more his enemies wanted to destroy him, and the worse they behave indeed), it is challenging to remain Christian. It is then more difficult to be a genuine Christian - resistant, partisan of the Faith - than during communism for communism persecuted or ignored Christians while this Globalization is polluting every soul at any time with any tool she can use. Christianity has often been threatened physically and intellectually. It is now threatened spiritually and intellectually - and physically too in "liberated Muslim countries".

It will become more refreshing and rejuvenating to live as a Christian. In a way I can tell that the connections between assaulted Catholics and Orthodox people -especially Russian or Romanian colonies in France-  are stronger than before because hey face the same perils and they use the same weapons and armors recommended par the Apostle Paul: love, family, virtues and community culture. May they remember these sublime lines of the Pope about the first monks and pronounced in Bernardins' convent in 2009: "It is said that the monks had to be stretched to eschatology. But this should not be included in the chronological sense of the term-as if they were eyes turned towards the end of the world or to their own death - but in an existential sense: Behind the interim, they sought the final."