It's Mitt the Twit against Barack Obomber

So, the die are thrown and as we had all imagined, in November the citizens of the USA will be voting for Mitt "I don't do gaffes" the Twit or Barack "Change is a six-letter word" Obomber. Does it really make any difference? No, it does not, the corporations and the lobbies will close ranks around the one who wins and neuter any silly ideas. 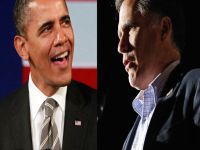 So here we have it ladies and gentlemen, Mitt the Twit's wife telling us her man will not fail as he gets the Republican nomination, as if anyone was surprised. Fail? He fails every time he opens his mouth but that does not matter. Heck, he's up against the Democrat incumbent President Barack Obomber, whose promises for change ended up being neutered by the Clinton factor in American politics, as the Jewish lobby (AIPAC) which dictates Washington's policies understood that the balance of power lay with the Biden/Clinton vector and that is where they sat.

And out in the cold was Obama, who nodded obediently and willingly as they gave him the prize of a war against Libya and made idiotic statements about bringing democracy to a country whose Jamahiriya system of Governments is more democratic than a dictatorship by lobbies in a cynical manipulation of public opinion through media campaigns and hype, which is the politics in the USA today.

So there went Barack Obomber sending cruise missiles crashing into the homes of Libyan families, the FUKUS Axis (France, UK, US) aircraft destroying water supply, electricity grids, murdering the Gaddafi grandchildren in their homes without so much as a smirk of an apology from Obomber and his demonic friends in Paris and London, and there went any hope that Obama represented any form of change.

The man who received the Nobel Peace Prize bombed Libya, insulted Africa, insulted the Nobel Institution and showed that for him, Change is just a six-letter word and he is powerless to do anything to bring it about. At least in his first term.

For those who think this columnist is about to switch ranks and join Mitt the Twit's camp, then they are wrong. As everyone knows, you need around seven years in politics to make anything happen and it is a possibility (or is it a pipe-dream?) that Barack Obomber can again become Obama if freed of the vice held by the Clinton camp, and tightly, around where he sits. Did anyone notice his voice reached a full octave higher a month after taking office, until it became a perceptible squeak?

The Clinton camp might secretly applaud every time Israel strafes a Palestinian school with phosphorous, they might turn the other way and suddenly become fascinated by their fingernails, or else veto any condemnation in the UN Security Council but it is crystal clear that Obama is disturbed by this sort of behaviour and that he has provided as much support as humanly possible for a process of dialogue with Iran, as against bombing its facilities with a series of three bunker-busters and fostering Armageddon in the Middle East.

Hopefully, without the Clinton camp active in American politics, Obama can shine at home and abroad, he can bring the change he promised and can restart his approach using dialogue and openness, debate and discussion being his weapons over the arms lobby which found a willing ally in the State Department. Let's face it, someone had to pick up the tabs for her failed Presidential bid.

Without Hillary Clinton, arguably as bad as Condoleeza Rice as Secretary of State, the woman who had everything within her reach to give the USA a new face in the international community, to reach out and shake hands instead of blasting them off, to show a smile instead of a scowl...but unfortunately she never had the emotional intelligence to pull it off, spending the last year in office looking like a butch trailer trucker looking for trouble.

A pity and a huge disappointment. With Biden having learnt to keep his mouth closed, Mitt the Twit obviously has not and will not. He has already proven himself lightweight and incompetent for the job, he does not have what it takes to pull it off on the international stage and at this dangerous moment in time - a danger created wholly by the USA and its FUKUS poodles - the USA needs a Statesman at its helm and a Statesman, Mitt the Twit ain't.

So the bottom line is, if US politics provides only a disappointing two-horse race (hardly a democratic system) then let everyone give Obomber the benefit of the doubt and see if he can claw his way back to becoming the Obama of four years ago. Without Clinton, he has a chance. Pity he hasn't thought about taking over the State Department for himself and accumulating powers.

Just a thought. C'mon, Barack...you can do better than that and you know it.