Every successful riot must be patented and registered

The lawyers of Pussy Riot developed a surprising activity for registration of the trademark of the name of the band after the verdict. On Tuesday, an attorney of Nadezhda Tolokonnikova, Mark Feigin, revisited the subject. 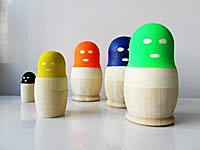 In an interview with Interfax he said that he started registration of the trademark Pussy Riot in April. Feigin said that this was done in order to avoid using the name of the band in all sorts of questionable actions and projects.

The lawyer said that now the ladies are the actual owners of the trademark Pussy Riot, and in the coming months he will be able to get the proper papers. It is unclear, however, whether it is true only for those members of the band that last Friday were sentenced to two years in prison, or the other punk band members as well, including those who are wanted by the police.

On the day of the verdict, it became known that the husband of Nadezhda Tolokonnikova, Pert Verzilov, expressed concerns about the appearance of various paraphernalia - T-shirts, mugs, caps, sweatshirts, etc. using pictures and names associated with Pussy Riot. According to him, the trademark Pussy Riot is officially registered and can be used only with permission.

Nicholai Polozov, a lawyer of Nadezhda Tolokonnikova, intends to defend Pussy Riot's commercial interests in the Khamovniki Court. He promised that those who use the brand Pussy Riot illegally will be prosecuted for violation of the right to use the trademark.

The activity of the lawyers is understandable. The convicted cannot manage their property. The question is, who will manage the property of Pussy Riot members if the appeal is not satisfied. Their relatives? Lawyers? Both?

While the lawyers of Pussy Riot are busy with the brand, other lawyers who defend the interests of Novosibirsk Irina Ruzankin explained where the convicted girls can get the money. Ruzankina requested 30 thousand rubles from Pussy Riot for mental suffering.

According to one of them, Alexei Krestyanov, "as recently Pussy Riot became successful, that is, the ratings are through the roof, they are owed a large sum of compensation." The brand itself, according to him, is estimated at a million dollars. Why this number and how he obtained this data is not clear. But he is confident that a world tour of Pussy Riot can bring them a lot of money. It is not ruled out that the lawyer exaggerates the success of a hypothetical tour of Pussy Riot.