Syria, the UN and accountability

The UN set up an Independent International Commission of Enquiry into the Syrian conflict to apportion the blame for atrocities, which it has attributed to both the western-backed "opposition" terrorist forces and to the Syrian Government forces trying to protect the country against this scourge. 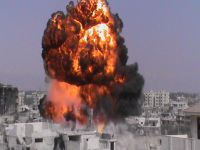 Where was the UNO in the run-up to the attack on Iraq, when its inspectors failed to find any Weapons of Mass Destruction and when the US Secretary of State was lying through his teeth at its own Headquarters in New York? Where was the UNO when the Indonesians were massacring the Maubere people in East Timor, when western powers were turning a blind eye and arming the Government and when Portugal was practically the only player on the international scene making its voice heard on the issue?

Where was the UNO when corporate interests were merged with the humanitarian disaster relief in Haiti?

Where was the UNO when the attack was launched on Afghanistan in 2001 three years after Mullah Omar had allegedly refused a bribe from the USA to build a pipeline across his country so that western assets in Central Asia could reach the Indian ocean? Where was the UNO when Iraq was attacked outside the auspices of the UNSC and while the UN Charter itself was being defecated on by FUKUS countries the UK and US?

Where was the UNO when Libya was attacked without any motive, when false flag events and lies in the media created the hype to go in and save the people from being bombed by the Air Force? Where were the bombs, as Saif al-Islam al-Qathafi asked Sky News as they took him around, a study in embarrassment, to show him the places they said had been bombed the day before? Of course, there were none.

Where was the UNO as terrorists were trained and supported by the FUKUS Axis not because Colonel Gaddafi was attacking them but because his humanitarian projects across Africa were costing the lobbies which close ranks behind the western governments too much money?

So now the UNO pontificates on the Syrian question, where the Government has every right to protect itself and its people against this terrorist filth, 75% of which is composed of foreigners, and states that the Government AND the terrorists are guilty?

An observation: No terrorists, no problem.