An international campaign has been launched to send a petition to President Putin based on the human rights of the three girls comprising Pussy Riot, a Russian punk rock band, who shocked Russian public opinion by behaving in a blasphemous and disrespectful way in Christ the Saviour Cathedral, Moscow, last March. 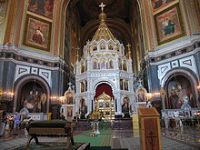 The three girls (or would it be appropriate to say sluts?) concerned, named Nadia, Masha and Katya, are educated young women who thought they had the right to enter a sacred space and behave in a wholly inappropriate way, desecrating the Cathedral with their disgusting, lewd, blasphemous and diabolical act of disrespect, an insult to Russian culture, an insult to the Church and an insult to God Himself.

And who is this other one making a noise? Yoko Ono, the one who sprang to fame because she slept with John Lennon and made films about people's bottoms?

Well with friends and sponsors like these, we see very clearly who and what Pussy Riot is. The Russian Federation has its laws and its Constitution and for a start, respects international law to the letter, far better than many of the nations which are kicking up such a fuss. Secondly, the Russian Federation does not need lessons in how to conduct a judicial process because if anyone wants any examples as to how, for example, processes are conducted in the United Kingdom, there are some excellent examples which could be provided.

For instance, in the UK, if you are a member of the public and you steal a plasma TV set or a bottle of mineral water, you go to jail where you are abused by other prisoners and probably end up getting Hepatitis and AIDS. If you are a member of Parliament and you steal a plasma TV set using taxpayers' money, or if you put your gardening expenses on the public expense list, or moreover, if you steal an entire house using taxpayers' money, you do not go to jail, you make a public statement such as "If I have to pay anything back, then I shall".

Thirdly, the hysteria which there days goes for news in the western media outlets yet again shapes public opinion, hype and tripe replace objective facts and the result is something along the lines of a medieval witch hunt: I saw a snake come out of her backside, BURN HER!!

In the forthcoming days the three females will be judged on the charge of "Hooliganism" which is the term in Russian covering what they did. Let us suppose three scruffy males walked into the Sacré Coeur, Canterbury Cathedral or the National Catherdal in Washington DC, and started a "performance" asking the Virgin Mary to remove Obama, Cameron or Hollande from power, kissing each other with tongues in mouths and stating that the Head of the National Church worshipped the Head of State and not God. No big deal? OK then, supposing the Russian Federation then launched a campaign to organise petitions to send to the leaders of the respective countries. Yes, exactly.

It is up to the Russians to deal with judicial questions on Russian soil, nobody else. If these three females insulted their culture and broke the law, then it is up to a Russian judge in a Russian court of law to mete out the appropriate judgement after a trial.

How dare the west speak about law after the way they have behaved in Afghanistan., Iraq , Libya and now Syria.

Oh and by the way the Changes international petition was organised by the Canadian female "Peaches", who appears with a full beard on her album "Fatherf*cker" and who is the author of songs like "F*ck the pain away".