The world came together in London in the Summer of 2012, sending its sons and daughters to the capital city of the United Kingdom to compete, to practise sport, to play. Fortunately there were no terrorist events, Olympic and World records fell daily, sporting excellence was achieved in a climate of professionalism and warm and endearing hospitality. 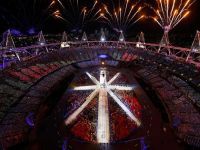 Not everyone in East London is satisfied with the outcome of the Games and this is a chapter to be explored in the near future, since the Olympics are page one of a long book, which continues with the Paralympic Games from August 29 to September 9. This apart, let us hold London true to its word in promoting a One Planet 2012.

This is not a planet to be dominated by a handful of nations imposing their version of democracy from 30,000 feet, strafing weddings, bombing houses with small children, targeting the water supply and the electricity grid of countries - civilian targets with military hardware, which is a war crime - to "break the people's backs".

The planet we aspire to, and the planet which the United Kingdom signed up to in its Olympic pledge and its soundbites before, during and after the Games, is one in which a multi-polar world comes together living like brothers and sisters around a common lake - the sea. It is a planet where sovereign nations are respected, and that means not interfering in their internal affairs, which is a crime under international law.

We all saw how Tunisia and Egypt were softened up and used as stepping stones towards the jewel in Africa's crown - Libya, where Colonel Gaddafi had dared to aspire to an African Union which was more than meetings and tea parties, an African Union which freed Africa and Africans from the yoke of neo-colonialist policies and latter-day Imperialism. His plans to free Africa from massive debt repayments with its own financial and economic motors to fuel his development projects in universal healthcare and education, to bring prosperity to Africa as he had done to Libya, were a tremendous threat to many lobbies which stood to lose millions.

But this is not the One Planet policy we, the citizens of the world, demand and unless the United Kingdom and its Government are using a cynical manipulation of public opinion to garner bonus points for investment while they plan to carry on as before, it was not supposed to be the universal sustainable development policy London should and would be tied to.

An ethical foreign policy is not one which breaks laws, disrespects the UN Charter, breaks the Geneva Conventions, launches murder hunts, massacres children in their homes, sides with terrorists, arms butchers, torturers and rapists and launches the legions of Baal such as we saw in Libya and are seeing in Syria - indeed, the Opposition forces in Syria are 75% foreigners, many of these the terrorist scourge we saw from Benghazi.

An ethical foreign policy is based around development and not deployment. It respects the frontiers and sovereignty of the community of nations, it respects international law, based upon the Charters, Agreements and Covenants that the UK has signed and should be committed to. What we have seen in the past few decades is a Foreign and Commonwealth Office intrinsically linked to the Ministry of Defence, both of which are controlled but by Whitehall, but by Washington and to a certain extent, Tel Aviv.

The UK should never have been in Afghanistan, even less should it have been in Iraq. It certainly should not have been in Libya and much less again in Syria. William Hague may have been an able leader of the Opposition in his time but in trying to lead the Syrian and Libyan Opposition, he has reached his point of incompetence under Peter's Principle.

No other Foreign Secretary has done as much to tarnish the image of the United Kingdom in recent history as this megalomaniac pariah. Time for the UK to live up to its commitments and practise what it preaches, or time to belong to the dustbin of international relations along with Washington, the only country to have used atomic terrorism and to have strafed civilians with napalm, the country to maintain modern-day torture chambers and concentration camps and Tel Aviv, whose of white phosphorous against schoolchildren equals the most despicable acts of cruelty the history book has witnessed.

Time for London to honour its Olympic commitment; time for Hague to go.