Aleppo: Conflicting stories and the truth

Again the western media is manipulating the facts, sifting through footage taken in recent weeks, showing out-of-date clips of tanks being commandeered by terrorists, then after their murderous filth was chased out of Damascus, they paint a rosy story of Aleppo. The truth so obviously hurts, hence the lies. Here is the full truth and nothing but. 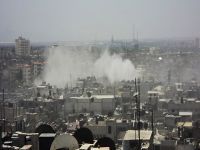 The Free Syrian Terrorist Force is, sorry to spoil the fun, certainly not composed by Syrians. Around 75 per cent of them are foreign mercenaries, murderers, "ex-SAS", "ex-French special forces", Libyan rapists, murderers and torturers, and so on, complete with the hierarchy composed of Iraqis and Turks and the token Syrian for the cameras.

Secondly, and sorry to spoil the fun again, things are not going very well for this western-backed scourge and their western masters, furiously scratching their heads as to what to do next. After Libya, with nobody believing a word London, Washington or Paris says any more, and after the foreign policy disaster in Iraq, invading outside the UNSC, what can they do, except keep on sending foreign mercenaries and murderers to their deaths inside Syria?

For those who wish to make a buck by fighting for this filth murdering civilians and raping girls, it should also be pointed out that they are generally not paid until after the first ten days, after which they are generally dead. Someone point that out to them, will you? Thanks.

And sorry to spoil the fun again, but Aleppo has not fallen to the terrorists. In fact, quite the contrary - it is surrounded on all sides, it is totally cut off and the enclave where the terrorists were concentrated, in Salah al-Deen has been sterilised. Few escaped. Allahu Akhbar! A few rats shaved their faces, a handful trickled through; the families of the others can thank the FUKUS Axis and the Gulf Cooperation Council for the loss of their young men. They were literally liquidated.

But we will not hear from or about these, because neither are most of them Syrians nor do they fight with documents, nor will their families see any of the money they were promised.

In Aleppo, there are groups of desperate terrorists left in pockets, low on ammunition, low on food and already doing what they do so well, namely murdering local civilians, stealing their food, looting their homes and raping their girls. And boys. Sodomy after all goes hand-in-hand with the FUKUS Axis and their minions. Remember Abu Ghraib?

Pravda.Ru sources in Aleppo claim this filth is totally alienated amongst the population - as in other areas they are hated (except a handful of villages where the western media concentrates) and there are reports that the civilian boroughs are being pillaged for food and valuables for them to carry back to their villages - and countries, if they get out. The sources have given a very clear picture as to what is going on: hundreds of these murderers, torturers and rapists were being exterminated by the hour by the brave Syrian Armed Forces.

As the terrorist pigs saw they were going to lose the areas they held, what did they do? They tried to storm a 5,500-year-old citadel and destroy it. How low does it get, when you try to destroy historical heritage in revenge? Fortunately, the Syrian Armed Forces were stationed around the citadel and saved it, eliminating the filth as it tried to destroy the main gate. The situation at present is that of the 12,000 rats trapped in Aleppo, perhaps 20% of that force has been depleted, leaving some 9,000 to 10,000 without supplies and no way of getting them.

Meanwhile the terrorist incursions from the Jordanian and Lebanese borders have diminished as security is tightened, the most porous frontier now being Turkey, which harbours the FUKUS darlings in a clear act of aggression against Damascus. The question is posed as to when Syria's patience snaps and Ankara is held accountable for what it is doing.

The Syrian Government has to be wary of the terrorists using a ploy they and their FUKUS masters have been thinking about for a long time now, namely using their own stashes of chemical weapons to launch a false flag attack, blame the Syrian Government and then whitewash public opinion for an invasion.

So now we see the true mettle of the FUKUS Axis and their terrorists and we see the graveyard of their policies and diplomacy. Rather than Iran being the country to look over its shoulder, Turkey looks set in certain quarters to get the karma it deserves.

You mess in the internal affairs of a sovereign state, you try to destroy heritage as part of policy and by God it comes flying back to you square in the face.

Time for a new age of world diplomacy without the lobbies and corporatist cliques which dictate the policies of Washington and its poodles while pretending to be democratic and accountable. How accountable is an organism that is not elected? Let the balance of power shift eastwards, to Russia, China and India, along with other States such as Brazil which uphold international law and do not insult it by saying one thing and doing another.