Despite being assailed on all fronts by marauding gangs of terrorists, many foreigners, pouring into the country across borders secured by NATO forces, Damascus has been officially sterilised of terrorist filth and while the largest city, Aleppo, is surrounded, the scourge are shaving off their beards. 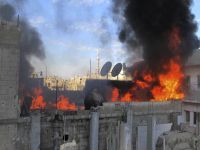 The western-backed filth in Syria - foreign mercenaries, terrorist groups, FUKUS Axis (France UK US) special forces and local misfits, criminals and agents provocateurs - is on the run. Damascus has been officially cleansed of this filth, as the last district infested by the darlings of Obama, Cameron, Clinton and Hague (the worst two leaders of diplomacy in the history of their countries) and now the new self-styled wannabe Napoleon with a Dutch name, Hollande, is sterilised.

Filth? Yes, filth. The crud from the bottom of the barrel, the human excrement scraped from the very dregs of society across Libya, the GCC (Gulf Cooperation Council) and the FUKUS Axis murderers, set loose in what has now become a crystal-clear policy of destabilising countries by proxy, sparking off colour revolutions by finding the disaffected on the fringe of society, arming and training them and then turning them into Mujaheddin.

It worked in Afghanistan, sort of, until the Mujaheddin morphed into the Talebaan and 9/11 was the thank-you note in a city famous for its support of "activists". Anyone heard of NORAID? In Iraq it did not, because despite funding the Sunni "insurgents" the country suffers civilian death rates through militant action the wrong side of civil war statistics.

Libya? The country has been destroyed, it is now a failed State, the lot of the people changed from peace and prosperity, free housing, free education, free healthcare, all their needs catered for and replaced with what? Thank you William Hague, thank you Hillary Clinton. Great job...great job...

And once again in Syria what do we see? These days ladies and gentlemen, we see the west is clearly linked to terrorism. We all know how social networks are controlled and hacked, we all know how inconvenient videos and articles and pieces of information disappear. True, new networks will soon replace the existing ones, new networks which practise the precepts of freedom of speech and freedom of expression, instead of just expounding them.

And what about the Western-backed MeK? State Department terrorist list then delisted. All you have to do to get delisted is to play the game, meaning you take your orders from Washington or its agencies. Basically a terrorist is an activist that does not buy weapons from the NATO arms lobby; an activist is a terrorist who does. An insurgent is somewhere in the middle.

Ask Hillary "War Zone" Clinton or William "Jefferson" Hey! Murdering the Gaddafi grandkids was soooo cool...Hague. These two people have done more to destroy the credibility of their countries for decades to come than any other cabal of disease-ridden criminals. The credibility of the external policy of the FUKUS-Axis is zero and that means the external policy of the USA, UK and France.

They are terrorist supporters and then run crying like ninnies when their terrorists turn against them. He who lives by the sword dies by the sword. Their policy might have disrupted the Jamahiriya in Libya (temporarily) but it has met its measure in Syria.

The western-backed terrorists are being slaughtered. Zenga zenga. They may complain that air power is being used against them, but then again...what the hell did NATO and the FUKUS-Axis do in Libya? What was that you were saying, Hillary "War Zone" Clinton and William, "if only they knew" Hague?

And wow the choppers are making a lot of noise, almost as much as they made in 'Nam and in Sirt, eh what? Time for zenga zenga... Are Washington and its poodles now going to do what? Nuke someone, as they did before?

PS: Careful with the cyber terrorist attacks. It kind of goes against the notion of freedom of expression and free speech, eh what?