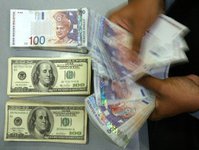 In past decades, many US municipalities declared bankruptcy. Since 1981, 42 cases were filed. Ten came in the past four years. Given hard times getting harder, what's happening now is unprecedented since the Great Depression. Cities occasionally declare bankruptcy. In America, they're coming more often. Others in dire financial straits may follow.

Officials have no choice. They can't meet payroll obligations through summer. "Faced with a budget shortfall of $45 million and city coffers that have already been drained, the San Bernardino City Council voted on Tuesday to file for bankruptcy."

Interim city manager Andrea Travis-Miller said: "I am concerned about our ability to make payroll, not only in the next 30 days but also in the next 60 to 90 days. A major restructuring of this organization is needed."

California cities have two Chapter 9 bankruptcy options. They can either hire a third-party mediator to negotiate with unions and creditors or declare a fiscal emergency. San Bernardino chose the latter way. Depression conditions ravage the city. Many others face similar problems. Stockton and Mammoth Lakes declared bankruptcy earlier. Other financially strapped cities and towns around the state and country may follow.

It's hard keeping up with many troubled municipalities, counties, school systems, and other public services potentially facing bankruptcy. In December 2010, financial analyst Meredith Whitney told 60 Minutes that over 100 US cities could go bust in the next year.

"There's not a doubt on my mind that you will see a spate of municipal bond defaults. You can see fifty to a hundred sizeable defaults - more. This will amount to hundreds of billions of dollars' worth of defaults," she said.

States spending exceedes revenues by hundreds of billions of dollars. Pension funds are $1 trillion in the red. Things are worse now than then. Meredith's prediction hasn't unfolded as fast as she feared. However, before crisis conditions subside, she may be proved right and then some. Paul Craig Roberts sees America's economy collapsing. He wrote about it and told Progressive Radio News Hour listeners. He wonders if it'll happen before Washington clashes with Russia and China militarily. He suggests an ominous doomsday choice - going down either financially or in a mushroom shaped cloud.

Americans achieved nothing from wars but unrepayable debt. Michael Hudson says debts that can't be paid, won't be. He calls it a "common denominator throughout recorded history." Adam Smith said governments never repay debts. When they become too burdensome, defaults follow. The possibility that US cities and municipalities may fall like tenpins looms very real. Since 2008, budgets have been severely slashed. Doing so becomes counterproductive. Austerity assures disaster. With fewer people employed at lower pay, revenues can't match expenses. Higher taxes make things worse. People can't buy goods and services without jobs and decent incomes. Prospects ahead don't look bright. Instead of going for broke by stimulating growth, America, like European countries, are going broke. Bad policies beget bad results. Sacrificing economies and households to enrich bankers assures failure. In America it's happening one foreclosure, lost job, bankrupt city and municipality at a time. Things are dismal. Instead of fixing problems, they're festering.

Until the 1930s, it was legally impossible for US cities to declare bankruptcy. Municipal legislation permitting it didn't exist. The 1934 Bankruptcy Act changed things. Cities and municipalities were included. Earlier rules became today's US Bankruptcy Code Chapter 9. It's available exclusively to cities and towns. Municipal bankruptcies don't extinguish debt. Reorganization follows. Cities can break untenable contracts and get more attractive financing. In 1994, Orange County, CA went bust. It's home to some of the countries most affluent communities. Bad speculative investments caused bankruptcy.

In May 2008, Vallejo, CA declared it. Last-ditch rescue efforts failed. Up to then, a California city that large never took this route. At the time, city manager Joseph Tanner said: "This has been a long frustrating process for everyone. There are no winners here tonight." Vallejo's city council voted unanimously to approve Chapter 9 bankruptcy protection. Its finances were in shambles.

Across America, cities and towns face the same dilemma. It's not pretty when mayors and municipal managers can't meet payrolls or pay other expenses. Short of turning out the lights and shutting down municipal government, they reorganize. Life goes on as usual but not easily for many. Ordinary people suffer most. Basic services get scrubbed to the bone. Bare bones resources are left.

Last October, Jefferson County, AL declared Chapter 9 bankruptcy. It's home to the state's most populous city, Birmingham. Its debt exceeded $4 billion. It was America's largest municipal filing in history. Fears spread then and now about who's next. Along with many small towns, transportation and school systems, Pennsylvania's capital Harrisburg filed last year. In late June 2012, Stockton, CA declared bankruptcy. It signaled more attacks on public workers, pensions and public services throughout the country. It acted after talks with bondholders and unions failed. A statement released said "(t)he city is fiscally insolvent and must seek Chapter 9" protection. The agricultural center is the largest US city to file. Mayor Ann Johnston said she saw "no other solution."

Health care for current and retired city workers was slashed. Vallejo did the same thing. So do other cities and towns. People least able to manage suffer most. Bankruptcy attorney Dale Ginter said labor and health insurance costs hurt municipalities. Cutting what impacts them most gets prioritized. Stockton, Harrisburg, San Bernardino, Vallejo, and other municipal bankruptcies reflect years of Wall Street fleecing America. Crooked bankers transformed America into an unprecedented money making racket.Complicit with federal, state and local governments, they make it the old fashioned way. They steal it. Ordinary Americans get scammed. So do large and small municipalities.

When other choices run out, bankruptcy's the final option. Class war follows. Private wealth and working households vie. A handful of winners emerge. Ordinary people lose jobs, homes, and vital services. Cherished ones are slashed or ended. The American dream is just a memory. Super-rich elites cash in big to make more. Concentrated wealth and power never had it so good. Ordinary people experience dystopian nightmare reality. In bankrupt municipalities, they suffer most. Detroit hasn't gone bust but it's dying. Half or more working aged residents have no jobs. Those with them have low-pay part-time or temp ones.

For over a century, it was America's industrial heartland. It drew workers from around the country for high-paying jobs with good benefits. Now they're gone. In the last decade, half the population left. Factories and neighborhoods are empty. Detroit is America's poorest big city. Poverty, unemployment, hunger and homelessness are endemic. Former middle class residents suffer like others. Their status reflects a national nightmare. In August 2011, Central Falls, RI declared bankruptcy. Located north of Providence, it's the state's poorest municipality. In 2010, it entered receivership. Major concessions were made. In February 2010, Central Falls High School fired all 74 teachers and 19 staff. It was part of a "turnaround plan." It never materialized. Deep concessions accompanied rehiring. Greater ones followed bankruptcy. In March 2011, Boise County, Idaho filed for protection. It did so to buy time to figure out how to pay creditors. In October 2009, Prichard, AL declared bankruptcy for the second time. Mayor Ron Davis just finished paying creditors from its 1999 filing. He released a statement saying other options weren't viable.