Exposing Obama would reveal the depth of US Government corruption 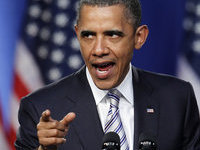 The solution for the United States is not to elect more "good" people to government because they are quickly co-opted and compromised by the corrupt political system.

It may sound cynical, but the solution is to make it politically advantageous for bad people to do the right thing.

It is not now politically advantageous for either the Democrat or the Republican Party to tell the truth about Barack Obama; that he is an illegal President and very likely a felon, who has a forged birth certificate, a forged Selective Service registration and is using a Social Security Number not issued to him.

Both parties are steadfastly protecting Obama to protect their investment in the corrupt political status quo.

The formula is simple. To keep themselves permanently in office, members of Congress collect taxes nationwide, they then use the proceeds to repay wealthy financiers with tax loopholes or government loans and buy constituent votes through local tax-funded projects.

The American people have given Congress a credit card with no limit. Rather than themselves being financially penalized for their largesse, members of Congress simply pass the debt along to ordinary Americans and future generations, while they enrich themselves through the power granted them to spend our money.

The larger the federal government, the greater the number of opportunities arise for politicians to benefit from the scam.

Is anyone surprised that 50% of Congress members are millionaires compared to the 1% millionaires in the United States as a whole?

Both Democrats and Republican recognize that exposing Obama will lead to a bloodbath of revelations about their complicity to undermine the Constitution and flout the rule of law, which would jeopardize their comfortable lifestyles. The truth would generate genuine outrage among the American people.

Even a Republican Presidential candidate, explaining the conspiracy of silence about Obama, once indicated off-camera that the issue runs much deeper than people realize.

That is why discussion of Obama's ineligibility and his alleged crimes is suppressed by politicians and the mainstream media. They all have too much to lose.

As part of their effort to undermine the rights granted by the Constitution, Congress has actively pursued legislation to limit free speech.

The First Amendment to the US Constitution states:

"Congress shall make no law respecting an establishment of religion, or prohibiting the free exercise thereof; or abridging the freedom of speech, or of the press; or the right of the people peaceably to assemble, and to petition the Government for a redress of grievances."

In February 2012, the Republican-led US House of Representatives voted 388-to-3 in favor of House Resolution 347, the Federal Restricted Buildings and Grounds Improvement Act of 2011 or more aptly dubbed the "First Amendment Rights Eradication Act", which makes free speech a felony under certain circumstances.

H.R. 347, which has been signed into law by Barack Obama, will allow the government to bring charges to protesters, demonstrators and activists at political events and other outings across America.

It is no longer possible to petition the Government for a redress of grievances. Our elected officials not only ignore the voice of the people, but they are now taking steps to silence that voice.

The time has come for mass public action by ordinary Americans against those who are perverting the Constitution.

Exposing Obama before the November election will shake the entire corrupt political system to its core and create a window of opportunity for the American people to take back control of their government.

Post the following in every public area in the country:

Force the corrupt politicians to do the right thing. Force them to tell the truth.