The UN and the parallel world

Reading some of the material which emanates from the UNO is like reading of some parallel world, some cloud cuckoo land where fairies live at the end of the garden, where clouds are pink and skies are rosy, a fantasy world created and perpetuated by the mainstream media. But beware of the siren's song... 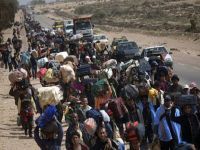 Ian Martin, the top UN envoy to Libya, has called on the need to include women in Libyan society as the country is rebuilt. Anyone informed would already have done a double-take in incredulity, the more informed would have gone puce red in rage and the most informed would be banging their fists on the table in outrage.

For those who do not know what I am talking about, settle back on your comfy sofa and I will tell you a bedtime story.

Background music, the sound of the sea, seagulls, waves on beaches...violins.... Once upon a time there was a country called Libya which was ruled by an evil tyrant who did not educate his people, who made them live in tents and who kept his country's vast wealth for himself. Then one day his people rose up against him. He massacred them by bombing them with aircraft and so NATO went charging in upon a white horse, freed his people, scheduled elections and just a few days ago, the UN Secretary-General's Special Representative and head of the UN Support Mission in Libya UNSMIL, Ian Martin, made declarations such as these:

"The new Libya provides a new opportunity for Libyan women to articulate your political, economic and social aspirations"; and "If women have equal opportunities to fulfil their political and socio-economic role, this contributes to development, democracy, nation-building and peace for all Libyans".

The Jamahiriya system of government under Gaddafi was the most participative democratic model of government yet implemented on Earth; Muammar al-Qathafi housed all Libyans for free before he housed his own parents; he used Libya's wealth to educate his people, for free, to treat them and give them dental care, for free, and he used the wealth to build Libya and make it the most developed country in Africa in terms of human development indices.

He used the money to set up Pan-African humanitarian projects bringing tele-medicine and e-learning to hundreds of millions of people. For free. And he set up schemes to finance future projects freeing Africa from the yoke of debt to western nations. Women's rights were the best in the region and among the best in the world, there was full participation in Libyan society by women. Why else was Gaddafi set to receive a humanitarian prize from the UNO?

And the only reason that Libya needs to be rebuilt is because NATO destroyed it, they destroyed its electricity supply, roads, water supply, hospitals, schools and public buildings because they wanted to dole out rebuilding contracts to the cronies of the NATO leaders.

If Libya needs rebuilding, Mr. Ian Martin, it is because the UNO stood back and did nothing while its friends in NATO unleashed gangs of armed terrorists against Libyan society. As for women's rights, I suppose slicing women's breasts off in the street, as done by the terrorists, is better than the full participation in society they had under Gaddafi?

The hypocrisy of his words make me sick. One final observation: Is the Jamahiriya system of government on the list in the upcoming vote? No? Then the election is rigged and as such it is void.