When will the UNO stand up and be counted?

As a humanitarian organization, the UNO is second to none, providing food, water, education, healthcare, scientific know-how to communities in need, protecting women and children from violence and exploitation and funding humanitarian schemes across the globe. As a law enforcer and peacekeeper, it is a non-starter. 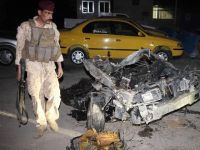 July 2012 - The UN-backed Action Group on Syria supports a roadmap for peace as the international community agrees on a peaceful transition to a new government (not necessarily a new President - that is a question for Syrians to decide, not Americans, British or French). Rightly, the six-point plan calls for an end to violence. However, how can the Secretary-General or envoys of the UNO seriously and with a straight face, make declarations about international cooperation towards a common goal - peace - when the Axis of Reason, headed by the Russian Federation and the People's Republic of China is using diplomatic means to sponsor a solution while on the other side, the FUKUS Axis (France, UK and US) is yet again doing what it can to destabilise a sovereign nation, using terrorists.

What happens next we have seen already in Libya. A mail-order massacre is performed right under the noses of the observers and is blamed on the Government, it matters not who it was in fact perpetrated by, the demonology and the media do the rest to create a casus belli, Russia and China are derided as pariahs because they have sat on the sidelines instead of giving the go-ahead for a terrorist massacre.

And while this bullshit is happening right under its nose, the UNO does nothing and pretends the FUKUS Axis is serious about peace. Sooner or later its Security Council will convene to try to force a military resolution through and sooner or later, if there is no agreement, it will go ahead anyway. The question is, how many more lines in the sand have to be crossed until everyone sees things as they are?

And the way things are is that the western powers are once again using imperialist measures to grab strategic points and siphon off resources, using two sets of weights and measures, yet again sponsoring terrorists and financing humanitarian outrages and they will continue doing so in Syria, they will move on to Iran and then on to Central Asia and guess which two are at the end of the line?

So, if the UNO is serious about what it says, then suppose it started forcing certain of its members to respect its charter, to respect the terms and conditions of the agreements they sign - legally binding agreements - and suppose the UNO itself started acting as if it was a responsible international peace-broker instead of a lackey to the lobbies which finance it, either directly or indirectly? And if this is indeed the case, then UN out of US, or US out of UN.

Suppose the UNO terminated the embarrassing insult to international law and removed the International Criminal Court at The Hague, the court which illegally held Slobodan Milosevic after he was kidnapped against every element of Yugoslav Federal, Serbian national and international law and which accused him of crimes, declared him guilty before the process was finished (declarations by the Prosecutor, in public...) but then since he died before the process was complete, how could he be anything other than innocent before proven guilty, which was not the case?

Finally perhaps the UNO could explain to us why France, for instance, is a permanent member of the Security Council with the right to veto, while Brazil is not, India is not, Indonesia is not. What is France more than them, unless arrogant...or is it then true that it helps to support terrorists and break the UNO's laws to justify having such a seat, as is France's case?

The UNO is an excellent humanitarian organization. As a lawmaker and peace-keeper, it is utterly useless and an insult to our collective intelligence.