The map is from June 25, 2012. The green flags show Jamahiriya-held areas, the flames show combats with the NATO-backed NTC terrorists, the rats show terrorist-controlled areas and the bombs denote NATO terrorist attacks against Libyan patriot forces defending their country from this scourge. Let us take a look at NATO's Libya. 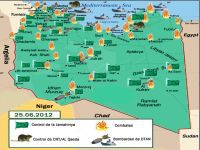 At the beginning of 2011, Libya had the highest human development indices in Africa, one of its highest literacy rates, education was available to all for free, housing was provided to all for free, transportation was subsidised, food was distributed for free. Communities regulated themselves through the Jamahiriya system, self-governance through People's Congresses. These Congresses basically met and decided what they needed and the Government provided it.

Enter the FUKUS-Axis (France, UK, US) coveting Libya's vast sovereign fund, Libya's vast energy resources and standing against Colonel Gaddafi's vast humanitarian projects in Africa, for which he was to receive a special humanitarian prize from the UNO and which also denied the FUKUS Axis' banking, arms, telecoms and other business lobbies billions of dollars in revenue from loans made to corrupted officials across Africa.

Look at this second picture and you will see a young girl, allegedly beaten, tortured and raped by the FUKUS-backed terrorists. This is the scourge they have been backing. There are countless tales of torture, of decapitation, slicing breasts off women in the streets, murder, arson, looting, vandalism, theft, rape. This is what the FUKUS Axis and its leaders have done to Libya - they have turned a peace-loving and peaceful society, a fun-loving society into a land of terrified communities trying their best to fight off the terrorist scourge, trying to block it entering their towns and villages and cities to perpetrate the most shocking acts of butchery Africa has seen in a long time. 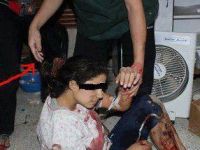 This is the legacy of Obama, Sarkozy, Cameron, Clinton, Juppé and Hague. Should they pay for it? Then why don't they?

Libya is a country in total chaos. This week: Four explosions rocked Tripoli, as the Libyan Resistance (patriots loyal to the Jamahiriya and against the NATO-backed Al-Qaeda terrorist rats) staged attacks against terrorist installations; Al-Qaeda terrorists in Benghazi cut oil supplies to western Libya (exacerbating the East-West divide).

There is news that Al-Qaeda elements are concentrated in the offshore Brak Shatty in a large agricultural project, southern Libya. The brother of Abo Yahia Alibi is with them. So where is the drone attack?

Al-Qaeda terrorists in Zintan have used mustard gas to murder people in Al Shqeqa, western Libya. So where is the drone attack?

Kufra: An ambush was launched by the Libyan Resistance against the NTC/Al-Qaeda/NATO terrorists by the Rijale Darf Hali Battallion. Many of these terrorist elements were liquidated in this operation.

Misratah: NTC/Al-Qaeda/NATO terrorist convoy has left the city heading to exterminate the Mchachiya tribe. Where are the drones?

Zawiyah: the NTC/Al-Qaeda/NATO terrorists murdered the lawyer Sadek Abderahmane. The terrorist group is called Haythem Khadraoui. Where are the drones?

NATO used chemical weapons in Libya: confirmed. Also, the quantity of bombs and missiles used by NATO in Libya is equal to 50 atomic bombs. Research: British Institute, study, Libya. In the following years Libyans will be born with disorders due to the radiation contained in these missiles and bombs.Environmental reports will be studied in the near future as to the future effects of these munitions on the subsoil and the environment, in which case under certain conditions, there is legislation to indict NATO and its leaders for war crimes under the Geneva Conventions.

Note: Is anyone with any sense of international justice interested in these reports? Where are those men and women who support the notion that international law exists to be upheld and not broken?