The Questions before NATO today

As NATO gets ready for a consultation with Turkey over the shooting down of an F4 and rumours appear that there was also an F16 shot down, let us see the questions they should be asking themselves and also the answers they do not wish to hear: NATO is a terrorist organization, the armed wing of policy implementation, a club for arms traffickers. 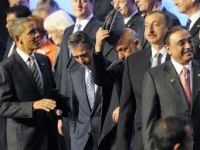 Question 1: What exactly was the Turkish jet(s) doing over Syrian airspace?

As the Israelis say when they strafe a wedding ceremony or a funeral or drop phosphorous bombs on schools, something which the FUKUS Axis (France, UK and US) never even refer to, is the victims shouldn't have been there, should they? In which case, why were the Turkish jets in Syrian airspace if not to test the air defense systems ahead of a military incursion, or else was it to strike a military target deep inside Syria? The F4 everyone knows about and now there is chatter of an F16 which was hit and crashed in Turkey.

Question 2: Why does NATO exist?

Or is NATO a clique for arms dealers, another echelon of jobs for the boys, another club where the high and mighty rub shoulders together and implement US foreign policy by stealth?

Question 3: How many millions to the taxpayers have to pay for NATO?

This information is hidden. The answer is many billions of dollars every year for Washington to implement its geopolitical schemes. The UK is an easy fall guy because of London's obsession to keep on good terms and have a "special relationship" with its ex-colony.

In fact, the cost is staggering. Did the citizens of NATO member states know, for instance, that there is not one NATO budget, but three? And did they know that NATO is not one organism, but a myriad of greyish bodies piled on top of one another, each one providing jobs for personnel whose work directly influences foreign and domestic policy, but who were unelected? There is the NATO Security Investment Programme, there is the NATO Command Structure, the NATO-wide Air Defence Structure, communications systems, the North Atlantic Council, the Resource Policy and Planning Board, Allied Command Operations, the Office of Resources among numerous other bodies, corporations, organisms and committees.

Did they also know that they pay a percentage of their country's national income? So instead of funding hospitals, education, schools, roads, policing, ambulance services, housing and pensions, the taxpayers' money is being siphoned off into this multinational greyish organism which controls their country's policy. Who elected it?

Is it Constitutional for a country's policies to be controlled by a foreign body which was not elected? I do not think so.

Question 5: What are NATO's policies?

I will answer that question directly. Let us imagine a railway line with different stations along the way, each station with its strategic importance and each one very much linked to energy resources. One by one, the stations are controlled. Despite claims and promises to the contrary, NATO advanced eastwards after the Warsaw Pact was disbanded. In fact, NATO lied through its teeth not once, but on several occasions, the latest shocking example being the mission creep in Libya. In fact, the Libya operation was so stupidly performed that nobody will ever believe a word NATO says, ever, ever again.

Afghanistan was a strategic cornerstone not only for its own vast mineral wealth but because it is a strategic connection centre between the Central Asian resources (one of the last stations) and access to the Ocean (Pakistan). Iraq was not only valuable for its oil but also covers the western flank of Iran, Syria covers the western flank of Iraq and denies Russia its last base in the Mediterranean.

Libya had a vast sovereign fund, which was literally stolen by the FUKUS Axis and by the way where is the money? Libya has vast mineral wealth. Libya's Colonel Gaddafi was also frustrating the banking, weapons, telecoms, and energy lobbies through his pan-African humanitarian schemes which were denying them millions of dollars in profits from their loans.

The next station in the line is Syria, as we can see and after that lies the IR Iran and thereafter a branch northwards to Central Asia and Russia and Eastwards to the PR China.

Question 6: Why is NATO arming terrorists?

A very good question would be to Britain's William Hague who has so far not managed to provide an answer: Why did the UK collaborate with LIFG, a terrorist organization on the FCO's own list of proscribed organizations? Why is NATO arming terrorists in Syria, through Turkey?

Question 7: Is NATO accountable for its acts?

NATO seems to think not, that it can simply saunter into a country, destroy its infrastructure, attack civilian systems with military hardware, strafe homes with bombs, support terrorists and send armed gangs of assassins and mercenaries into populated areas, to torture, kill, steal, commit arson, rape, sodomy, slice the breasts off women in the streets, you name it.

There are laws. Maybe NATO should start investigating and imposing accountability before someone else does.

And for the citizens of the world who are tired of NATO and its murderous policies, the answer is perfectly simple: Hold the politicians you elect accountable to their promises. Find out whether NATO is Constitutionally compatible in your country and reject any candidate who collaborates with this evil and sinister clique of bullies.