The Supreme Court should not be supreme

In the beginning, it seemed to make perfect sense.  America would have three branches of government-legislative, executive and judicial.  The first two would be accountable to the people, through the voting process, while the third would be comprised of judges responsible for hearing cases that arose under the United States Constitution, federal law, and/or disputes between two or more States. 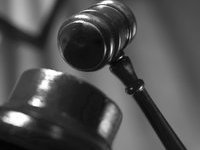 The reality, however, was a little more complex.  Many federalists, like Alexander Hamilton, were distrustful of giving too much power to the people, and the American South, where slavery was most heavily practiced, was concerned it would be dominated by the more populous North, because a State's number of Congressional representatives was to be determined by its voting population.

As a result, direct elections of United States Senators did not occur until 1913, via the Seventeenth Amendment, and members of the Electoral College continue to choose the President of the United States, oftentimes in defiance of the popular vote.  Also, to appease the South, the original constitution counted slaves, who were otherwise considered "property" for most legal purposes, as "three-fifths" of a human being for Congressional representation purposes.

By contrast, federal judges were to be appointed, not elected, and their tenures could only end with their retirements, deaths or impeachments.  In addition, the financial compensation they received could "not be diminished during their Continuance in Office."  (Article III, U.S. Constitution.)

As the thinking went, if federal judges were neither accountable to the voters nor fearful of economic retaliation, they would be immune from political pressure and popular opinion, and thus could make decisions that might be unpopular, but legally sound.  The apex of the federal judiciary would be the Supreme Court, which is currently comprised of nine so-called "justices."

As time progressed, the power of the federal judiciary, particularly the Supreme Court, became much more pronounced.  The addition of the Bill of Rights to the Constitution in 1791 gave federal courts a more definitive list of the individual rights and freedoms they were supposed to protect and promote, and the 1803 case of Marbury v. Madison further gave these courts the power of "judicial review"-a doctrine that allows them to scrutinize both federal and state laws to determine their constitutionality.

This optimistic belief in the legal system's ability to rise above the political fray, to defend the rights of unpopular minorities against "the tyranny of the majority," and to protect and promote social justice inspired me to go to law school.  One case that particularly motivated me was Brown v. Topeka-a United States Supreme Court ruling that dismantled the racist doctrine of "separate but equal."

I believed that, if not for the Supreme Court, de jure racial segregation would still be the law of the land.  The other two branches of government, after all, were (and are) largely dependent upon the will of the voters.  Since, through a series of local laws and customs, the voting rights of African-Americans were severely diluted in the South, Congress often needed the support of Southern segregationist politicians to pass legislation and presidential candidates needed the Southern white vote; thus there was little incentive for politicians to advance the cause of civil rights, even in a nation where all men were supposed to be created equal.

But soon I began to realize something I should have thought of all along.  Brown v. Topeka simply overturned a previous Supreme Court ruling (Plessy v. Ferguson) that had endorsed the "separate but equal" doctrine.  And it took fifty-eight years for the Court to do that.

After studying other rulings, I discovered that, throughout its sordid history, the United States Supreme Court has been wrong more often than it has been right, and, instead of functioning as an instrument of justice and a defender of the rights of the weak and oppressed, it has frequently championed oppression and injustice.  The Court has impeded social progress more often than it has advanced it, has habitually favored capital over labor and property rights over human rights, and the only minority rights it has consistently protected and promoted are the rights of the minority that control a majority of America's wealth.

Some legal experts argue that many of the Supreme Court's more egregious rulings should be excused as a product of their times. But Justice Harlan, in his famous Plessy dissent, lucidly foresaw the evils of racial segregation that other "justices" apparently did not.  Plus, this argument does not explain the inane rulings of the current Supreme Court.

Today's Supreme Court is perhaps the most politicized in American history, thanks primarily to a corrupt cabal of so-called "justices" who make up the Court's "conservative" majority-Scalia, Thomas, Kennedy, Alito and Roberts.

The conscienceless evils of Scalia and Thomas were evidenced years ago, in the cases of Hudson v. McMillian (1992) and Herrera v. Collins (1993).  In Hudson, Thomas and Scalia found no constitutional violation when two prison guards beat a shackled inmate while a third jokingly told them to "not have too much fun."  Thomas and Scalia's stance was so inhuman that even Sandra Day O'Conner, a corrupt and politicized "justice" in her own right, felt compelled to remark that their views ignored the "concepts of dignity, civilized standards, humanity and decency..."

And, in Herrera, Scalia essentially opined that inmates who have been found legally guilty of capital crimes could still be executed even when factual evidence later surfaced that established their innocence.

But the case that most prominently exposed the corruption and politicalization of the Supreme Court was also the case that facilitated the coup of 2000-Bush v. Gore.  Five of the Court's most "conservative" members at that time-William Rehnquist, O'Conner, Scalia, Thomas and Kennedy-not only supplied the majority "opinion," Rehnquist also asserted that Bush v. Gore could not be cited as precedent in future cases.

Apparently Rehnquist and his fellow reprobates were concerned that the electoral fraud and corruption they endorsed to illegally elevate Bush to the presidency might be used by future presidential candidates who possess political views antithetical to their own.

Although Rehnquist and O'Conner are no longer on the court, they have been replaced by two equally, if not more, ethically corrupt "justices"-Samuel Alito and John Roberts.  The result has been a relentless brand of legal realism that has transformed the law into nothing more than a reflection of the "conservative" majority's personal biases, corruption and hypocrisy.   These five so-called "conservative justices" have not only shamelessly promoted plutocracy, economic elitism, corporate greed and political corruption, they have also callously imprinted their racism, sadism, greed, self-serving agendas and contempt for human and civil rights upon the American landscape.

The result has been a plethora of Supreme Court cases decided by a 5-4 vote.  And with the prospect of similar votes occurring in the foreseeable future, one reality is evident:  Five unaccountable people should not have the power to make decisions that impact the lives of millions.

The Supreme Court's decisions should be subjected to review and voted upon in a democratic fashion.  However, in keeping with the historical belief that the judiciary should be immune from political and economic pressures, such reviews and votes should come from within the federal judiciary itself.

Changes must also be made to the Supreme Court's discretionary power of certiorari, which incessantly and arbitrarily permits so-called "justices" to deny hearings to legitimate cases that desperately need to be heard.  To counter this, federal judges must also be allowed to vote to overrule denials of certiorari, and, to alleviate concerns that such voting would unduly backlog the Court docket, the number of cases added should be limited to no more than five or ten per Supreme Court term.

Tragically, the extent of the evil being propagated by Scalia, Thomas, Kennedy, Alito and Roberts, and their ability to impose that evil on the lives of millions, starkly argues against their infallibility and definitively makes them unworthy of the power of finality.

In other words, the United States Supreme Court should no longer be Supreme.