Syria on the Horizon? 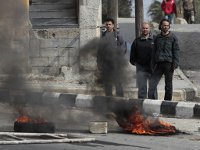 Current Human Terrain System (HTS) program manager Colonel Sharon Hamilton will be retiring after 27 years in the US Army. She will be replaced by another active duty Army colonel according to sources.

One source wryly pointed out that "now we will find out if she [Hamilton] used US government funds in pursuit of her PhD."

As the program undergoes yet another leadership change and budget reductions for 2013, personnel are trying to figure out how to make the most of a precarious employment situation. Apparently there are moves afoot by some within HTS to be reclassified from Human Terrain Analysts (all due to be fired by July) to Research Managers. As one source pointed out, all manner of schemes will be used to salvage employment, return favors and ensure that "comp time" gets paid.

There is even a glimmer of hope that the United States will continue its warring ways in Syria. Paraphrasing one enterprising HTS'er,"We would hate to lose that person's skills with Syria on the horizon."

Meanwhile, according to Colonel Hamilton, "This is a time of many transitions in HTS...Once we have the authority to enact the revised HTS support plan, we will conduct a responsible transition to the FY13 level of support while still providing all required HTS mission support to ISAF. Our teams redeployments and personnel transitions will occur in conjunction with ISAF mission transitions and priorities. Team redeployments and personnel transitions will occur prior to the end of FY 12in order to avoid spillover costs to the already reduced FY13 budget. The reduction of the number of deployed teams will also result in personnel reductions in the support provided by RRC, Training, and staff.

Due to the planned reduction of the overall number of HTS deployed teams in FY13, we are not able to bring new personnel on board in FY 12. As a result, on 8 June 2012 we informed the HTS support contractor CGI that we will not conduct a July HTS class. The current April cycle class will graduate on 2 July as scheduled, however their swear-in as DA civilians will not occur prior to FY 13 (OCT 12). The May training cycle was released back to CGI and will not continue training.

Organizationally, we are undergoing a leadership transition. As many of you know, last October, I submitted my retirement packet after 27 years of service. My retirement ceremony is 29 June and my official retirement date is 1 SEP. The HTS Director position is a priority for DA and TRADOC G2 and they have selected an active duty colonel to replace me; he is due to report in July. COL Steve Bentley, formerly AF2 Team Leader, is now on board and conducting his overlap with COL Mark Bartholf as the Deputy Director. Effective 29 June, COL Bartholf will be acting HTS Director until my replacement gets on board.

We expect that the impact of leadership transition will be minimal due to the solid HTS staff structure and processes we built over the last two years to ensure continuity of operations. We have professional and extremely effective staff directors in place and they ensure that OCONUS and CONUS HTS employees receive professional support. The staff Directors will ensure that during my transition, COL Bartholf's transition in OCT, and the pending mission transitions in AFG there is no change in support to all deployed teams, CONUS HTS staff, and our mission.

I sincerely understand the personal effect that these changes will have on our employees. All of you as DA military and civilian supervisors have the professional responsibility to provide this information to our employees in the context of DA wide changes in funding and the overall ISAF missiontransition."

At the end of the day, according to sources, Hamilton "is swimming away from the sinking ship, and will leave this mess for Bartholf to handle. Bartholf will play dumb and stall for time. The first wave of cuts must be completed prior to 1 October. The second wave, prior to 1 January 2013, and the third wave will automatically kick in on 1 January. They are already moving the pieces into place to shut down the program...Do not take any work or download anything that doesn't belong to them. You may see a lot of that amongst the Social Scientists who will want to prove they did something of note."