Syria, Russia, Clinton, Hague. The victim, the peacemaker, the aggressors; the innocent bystander, the lawmaker, the criminals. Before we start discussing the Syria question, let us remember Libya and let us remember who is arming the Syrian terrorists. If you give weapons to terrorists and instigate them to create havoc, there are consequences. 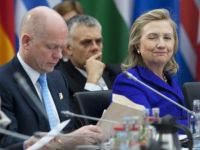 How dare Hillary Clinton or William Hague refer to the Russian Federation in anything other than words of reverence, iterated with respect, heads bowed, nodding obediently, like a humble servant who has wronged and does not dare to make eye contact.

After the way these two have behaved, after their countries wantonly stirred up a rebellion in Libya using special forces when deployment was forbidden, after they strafed civilian structures with military hardware, after their military alliance murdered children in their homes, after they strafed the water supply and attacked the electricity grid, how dare they opine on any event in the world community and how dare they get their bloodstained hands anywhere near the tools of policymaking.

The Pecksniffian, wiseacre characters Hillary Clinton and William Hague are not, yet, up before a war crimes court, charged with criminal activities including murder, aiding and abetting a rebellion in a sovereign state, taking sides in an internal conflict, breaching the UNSC Resolutions, occasioning acts of torture, rape, arson and destruction of property, grievous and actual bodily harm in supporting elements of terrorist groups. The case is drawn up and has been delivered to the ICC and to the European Court of Human Rights, it will be delivered to other legal fora over time and it will eventually be processed. Until such a day, Hillary Clinton and William Hague can look over their shoulders, can swallow dryly every time the doorbell rings, because they know it will happen.

Diatribes and personal invective apart, much as it may be deserved, the Syrian question needs solutions, the Syrian people deserve a solution; the sooner it comes and the more Syrian and political it is, the better.

The bottom line is that NATO in general, and the FUKUS Axis (France, UK, US) in particular, have discovered a new method to open the gateway for an invasion, for imperialist adventures. Whereas in the past an act of war was necessary to justify military intervention (and if we were now to go back and do some detective work in the history book, how many questions would we raise?) these days a colour revolution is enough.

A colour revolution is a cynical act of intrusion into the internal affairs of a sovereign state. It is achieved by using special agencies to set up bank accounts, subvert opponents against the Government, launching a massive smear campaign in the media using the buzzwords of today. Spot them: regime (government); compound (home); crackdown, repression (authorities imposing law and order); dungeon (prison); dictator (leader, President) and rhetorical questions such as "Just how many more of his people is he going to kill?".

This is coupled with a cynical manipulation of the truth using dubious (paid) eye-witnesses and demonstrators, misuse of photographs, sometimes from decades back or else from different countries (do they really think the public is that stupid? Or have they totally miscalculated the power of the alternative media and is that why they are hacking and attacking them on a constant basis using cyber terrorism methods?).

Once the machine has been set in motion - give people money and they will do what you say, give people weapons and power and you have a marauding gang of terrorists, a mob at your beck and call, to commit mail-order massacres when the media is ready to take the scoop to the front page and obediently shape public opinion, blaming it on the bloodthirsty tyrant.

After that it is easy. Images of screaming children in hospitals, hopefully not catching "vaccination room" just two centimetres to the left of the camera and for internal consumption, a Prime Minister or President power-walking to a dais where he/she/it delivers a ra-ra-ra rabble-rousing speech firing off in all directions, looking cross, eyes flashing as the fist smashes down on the papers as terrorists and dark forces are invoked, a puerile and primary attempt to manipulate the population through the manipulation of fear, creating the "them" which justifies the "us".

Where were Clinton and Hague at the Sorman massacre, Libya? Silent. So we see, the "colour revolution" approach is based upon cynicism and manipulation of the truth rather than any humanitarian or democratic preoccupation.

Syria and the future

President Assad made it perfectly clear in his speech this weekend that the door is open for dialogue with those who do not wish to involve foreign forces, namely a national and internal reconciliation process, Syrian solutions for Syrian questions, by Syrians and for Syrians. Russia has made it perfectly clear that it is supporting international law, not intervention in the internal affairs of a sovereign state.

Hillary War Zone Clinton and William Hague, the slap-head Tyke poodle dog so obediently crawling up his mistress' skirts, have also made it perfectly clear where they stand, namely for a continuation of a foreign policy based not upon diplomacy and discussion and debate and dialogue but rather a proactive and belligerent approach more connected with business interests than with what is right and wrong.

Perhaps it is not their fault; perhaps the apparatus in the State Department and Foreign and Commonwealth Office is already in place and neuters any great ideas the second they are proffered. However, the sooner these two countries and their new-found friend, France (until yesterday ridiculed in each and every corridor of Whitehall) reassess their approach to international relations, the better a place the world will be.

As for scolding Russia when it is one of the few countries these days bold enough to stand up for international law, not only is it ridiculous, it underlines the incompetence of those who pursue this path. And again the buck stops at the feel of the Pecksniffian pair.