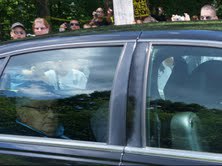 The end of the Bilderberg meeting means impending trouble for the world. The good news is that Independent journalists are digging the mainstream media's grave as each day passes. Who needs the mainstream media when you have videos from educated people? The protesters that gather with them are wrecking the plans of these global elitists.

No Bulls**t but bullhorns from Alex Jones who is a hard charger in the fight for freedom. The Infowars.com reporter leads the pack with Jim Tucker's inside man saying they wanted Ron Paul and his supporters dead in this video. Ron Paul must be good for America if the Bilderbergers hate him.

Ron Paul (Republican) seems to be the only honest politician left but even the Right wing conservative radio shows in America make him out to be a nut case because he says Iran is not a threat.

He is similar to Pat Buchanan who was fired from MSNBC. They both have been saying the same thing about Iran having no nukes and that Israel has 300 nuclear warheads. As Buchanan once said, "you can't replicate the Middle West (of America) in the Middle East".

Infowars.com says Florida senator Marco Rubio, who recently spoke before the Council on Foreign Relations may be the VP choice. Their article and videos about it are here.

Tucker says with the exception of Reagan, the Bilderbergers have been choosing VP's and presidents since 1964. Probably explains why Reagan was shot since he was not Bilderberg approved. Good thing he survived. I guess Kennedy was not approved either.

The good news from Tucker, who is with the American Free Press, is that, "we're winning, they're losing" and the Bilderbergs are getting more upset as each year passes. It probably explains why Rockefeller opened up his big mouth:

"Some even believe we (the Rockefeller family) are part of a secret cabal working against the best interests of the United States, characterizing my family and me as 'internationalists' and of conspiring with others around the world to build a more integrated global political and economic structure---one world, if you will. If that's the charge, I stand guilty, and I am proud of it."

The phone number to the Marriott Hotel in Chantilly, Virginia is 1-703-818-0300. Alex tells us to ask for David Rockefeller, Bill Gates or John Kerry for example. Alex is loud but humble and asks for our help in this real battle against tyranny.

The hilarious part was Alex using his bullhorn to keep the Bilderbergers awake last Friday night. The theintelhub.com was there using their own bullhorns too and made a lot of videos during the protest. There's nothing like a video to tell the truth. Great job guys!

Alex said he saw the Associated Press out there but they were not seen by RT. I liked his expose of this evil including a comment he made about the Devil in this long video he made June 1st with Joe Bannister.

The members of the Bilderbergs want a global bank, police state, controlled internet and an electronic ID system. Alex gives a good explanation of their agenda and how they might put it into action here. Keep in mind the Euro was created by the Bilderbergs.

The US government uses Al Qaeda to overthrow the government in Syria. I am sure Bassma Kodmani, a member of the Syrian National Council who is at the meeting, will be planning how to get NATO involved and avoid UN conflicts with Russia and China who refuse to be fooled by their agenda.

The Bilderbergs even admit it this year. On their website they wrote:

"The Conference will deal mainly with political, economic and societal issues like Transatlantic Relations, Evolution of the Political Landscape in Europe and the US, Austerity and Growth in Developed Economies, Cyber Security, Energy Challenges, the Future of Democracy, Russia, China and the Middle East."

Who Put Them in Charge?

So who gives them the right to meddle in other countries affairs? Isn't that how World War II started?

"We are all obliged to remember why the war had started, and to learn our lessons from it, as they are still relevant these days. And I want to emphasize today that following the international regulations, and respecting the state sovereignty and each nation's right to make their choices is one of certain guarantees that the tragedy of the past war will not recur." - Russian President Vladimir Putin

Shouldn't countries respect each other's rights to make their own decisions? Putin made it clear last May 9th commemorating the victory day over Nazis Germany. My video with English subtitles for that day is here.

You can bet that Putin will not let the Bilderbergs interfere. He swore at his inaugural address May 7th, "to protect the sovereignty and independence" of Russia. I'm sure he's on the same list as Ron Paul. Vladimir Putin is the only one besides China who is not afraid to physically oppose the Bilderbergs agenda with military force.

One poor girl with the American Free Press was hog- tied by the police in this video and you can really see more police involved. Well, so much for the so called "free-press" in America. It was killed decades ago but this is proof for the doubtful. The crack heads of the mainstream media are making mega bucks spinning propaganda, meanwhile an investigative journalist gets arrested.

A great eyewitness, U.S. veteran was arrested, abused and forcefully vaccinated by Fairfax County Police. He was not read his rights and was asked if he learned his lesson. Apparently he was used as an example to intimidate others from getting too close to the Bilderbergs. They were clearly trying to intimidate all the protesters. He said he was told by a benevolent police officer,

"Hey, you know they're out to get you. They're gonna' grab a few of you to make a point, just to keep you guys in check"

One protester was arrested for crossing the street.  Alex Jones mentions the fact that the police told bus drivers not to give him a ride on the buses or they will get ticketed. The police will protect the rich elite but they will not enforce the Logan Act. Every American in the Bilderberg meeting should have been arrested on felony charges.

Alone in the Rain

Abby braved the elements and was soaked in reality during her report. Abby Martin from RT made this video on Thursday. She was alone in the rain Friday June 1st with no sign of any mainstream media there in this video asking "why is that?". She does say this is the first time the Washington Post (a Bilderberg pawn) and the Huffington Post are starting to report it, but they were not out there with her. These fenceless funny Posts are exemplary of lazy journalism.

Where the Hell Have You Been?

The Posts make it sound like the Bilderbergs are a new thing begging the question, "Where the Hell have you been???" The Bilderbergers have been around since 1954.  Well, give the Washington Post credit for spotting Bill Gates coming into the Bilderberg meeting. I bet the Posts left for home after that. Anyone would love to have their job. No sign of ABC,CBS, MSNBC, FOX or CNN with little Abby in the rain.

It should not surprise us since Bilderberger David Rockefeller said,

"We are grateful to The Washington Post, The New York Times, Time magazine and other great publications whose directors have attended our meetings and respected their promises of discretion for almost forty years. ... It would have been impossible for us to develop our plan for the world if we had been subject to the bright lights of publicity during those years. But, the world is now much more sophisticated and prepared to march towards a world government."

One has to ask why the occupy Wall Street protesters are not here where they are truly needed. What about those who protested Bush all those past years and called him Hitler? WTF???  David Icke says they refuse to believe they have been used and betrayed in "David Icke on how Bilderberg elites control society" He calls Obama, "Bush on steroids" and talks about "the global agenda of human enslavement".

One last hoorah for the Guardian's Charlie Skelton who gave a good summary Sunday, June 3 in his article "Bilderberg 2012: real men don't like oligarchs". I love the title. He talks about "torrent of testosterone" at the protest. Thump your chest gentlemen. It takes guts to risk imprisonment and loss of job to fight for what's right.

Keep in touch with those who are giving their best effort to bring us the news. They are selfless and are clearly not making MSM megabucks. If you're late to the Bilderberg circus it will catch up to you one way or the other, either when all your freedoms are gone or when the movie comes out.