Another farce at the ICC

The Ratko Mladic trial at the farcical International Criminal Court - that travesty of justice and insult to international law which kidnaps people, illegally detains them and does not apply the principles of due process - has been interrupted indefinitely after the prosecution "forgot" to deliver thousands of pages of evidence to the defence. 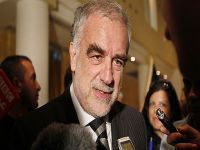 In any court of law anywhere on the planet, the prosecution delivers its case to the defence well in advance of a trial for the defence to draw up its defence for its client, finding eye witnesses who refute the "evidence" presented by the prosecution, finding character witnesses and in general, disputing the accusations with facts, where possible. In any civilised society, a defendant is deemed innocent until proven guilty by the said court of law after a period of due legal process has been included throughout a trial and a judgement.

In the case of the International Criminal Court, or better, International Kangaroo Court at the Hague, it is hardly surprising that the above-mentioned process did not take place because let us be honest, neither is the ICC a proper court of law nor does it uphold international law - it is an aberration which insults every fibre of legal process and underlines the fact that while international law exists, it is not implemented with the same set of weights and measures, ridiculing claims by countries such as the FUKUS-Axis (France, UK, US and Israel) against "pariahs".

The ICC has already shown its true mettle. Why, we remember the kidnapping of Slobodan Milosevic against the terms of Yugoslav Federal Law and against the terms of the law of the Republic of Serbia in force at the time (despite being pointed out in this column, nobody had the courage to take up the case), we saw the illegal detention of Milosevic after this act of kidnapping and we saw him die in detention after the court's chief prosecutor del Ponte had declared him guilty before his trial had ended.

Then we saw the abject silence of the ICC during the shocking act of butchery by the FUKUS-Axis in Libya as these countries supported terrorists which committed acts of murder, torture, rape, looting and wanton destruction of property, and despite the sending of the indictment below (*), nothing was done as the said indictment did not even receive the courtesy of a reply.

And now? Now, we have the court interrupting its prosecution against former Bosnian Serb General Ratko Mladic because the Prosecution "forgot" to provide the Defence with some "evidence" it had. We are not speaking about a mere snippet of information or the odd video film. We are speaking about tens of thousands of pages of "evidence" which should have been delivered last November.

In any normal court, the case would be declared void and the court incompetent to try any more cases. But then again, after what we have seen, the ICC is not a normal court, is it? And it sure as hell isn't a court of Law.