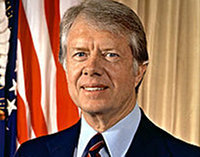 According to American scholar Noam Chomsky, every U.S. president since Truman was or is guilty of war crimes and crimes against humanity according to America's own precedent set in Tokyo and Nuremberg just after World War ll. Jimmy Carter affects a superficial appearance of amiability and since leaving the White House, besides his well-known work for Habitat for Humanity, he has espoused time and again humanitarian causes. He has been appointed a diplomatic plenipotentiary time and again, especially under Clinton, and he made a well-publicized trip to Cuba and met Fidel Castro recently, where he, without mentioning the repression under corporate monopoly capitalism, in Georgia and everywhere else in the U.S., chided Castro in a would-be gaffe for alleged undemocratic practices and "human rights violations."

Then, God only knows why, he was awarded the Nobel Peace Prize, as if the Nobel committee in Oslo had temporarily gone out of its mind. Carter, a media darling of the half-truths, disinformation, lies and deceit of the corporate-censored American media, is regarded as a Southern gentleman, a man who once was engaged in the innocent farming of peanuts after serving in the navy, smiles often and appears to be a nice, pleasant, gentle, peaceful man of integrity.

Not so fast. As the old maxim goes, the cowl does not make the monk; appearances can be deceiving. In an underappreciated book from 1981, Reading Faces, the author, the late Dr. Leopold Bellak, a distinguished psychologist born and raised in Austria and thus free of American ethnocentrism, and who about 1940 immigrated to the U.S., distinguished his face-reading book first, by telling it like it is, and second, by his scientific use of what he called the "zone system." As the book's jacket says, "The zone system is simple: Divide the face into sections with a vertical line down the middle and a horizontal line just under the eyes. The four resulting zones are then individually read in eight steps."

Discussing "seeing through the phony smile," relying above all on the fact that the eyes are the windows to the soul, analyzing every relevant feature of the face, even the tension of the nostrils and the lines and creases in the skin, Dr. Bellak (along with co-author Samm S. Baker), found, through the analysis of photographs of famous and notorious people-and of one painting, La Jaconde (the Mona Lisa)-that Elvis Presley had a nasty temper, that the "labored grimace" of Senator Joseph McCarthy was "patently contemptuous," that JFK was "not one to be crossed," that Senator Robert  Kennedy was "aggressive and strong to the point of potential brutality, yet who also has a very human side, suggested primarily by the left eye-like his brother John, someone not to be taken lightly," that Ted Kennedy's "right nostril [seemed] slightly more constricted, indicating a tighter control than is obvious," and that President Reagan's eyes "appear[ed] cold"; Reagan's "nostrils are tight and the thin lips indicate aggression.... The chin is very firm, again suggesting aggression, which the whole facial expression ["of the seasoned actor and politician"] seeks to conceal.... [And in sum the photo revealed] some coldness, anger, impatience and a calculating mind...."

The gaze never lies. People can be fooled by first impressions, facial impression management or behavioral gestures, but the face is an open book. Carter to Dr. Bellak "appears troubled and conflicted," half of the born-again phony's face looked "staring, wary and challenging.... The strong vertical furrow above the nose...is suggestive of anger.... [The] chin suggests probable aggression. [The one half of carter's face] is anxious, troubled, depressed, and wrestling with some anger and frustration, possibly nastiness [italics added]." Dr. Bellak's examination thus hardly fits the former president's reputation for humaneness, or even for being a kind man. His record during two parts of his career-his days in power as president, January, 1977 to January, 1981-and his subsequent "humanitarian" diplomacy after leaving office will be examined to see whether he is what he pretends to be.

While president, during which he "proclaimed human rights to be 'the soul of our foreign policy,'" Carter substantially supported the genocidal murder of some 200,000 people in Timor, an island of southeastern Indonesia, about 250 miles north of Australia. West Timor, formerly a Dutch colony, is now Indonesian territory; East Timor was formerly Portuguese, The original inhabitants of Timor were Malay, Polynesian and Papuan. The island is oil-rich. Guilty of the atrocities were the Indonesians under their ruler General Suharto, whom Carter aided. The president, who by all appearances is extraordinarily naïve, vetoed United Nations resolutions to stop the Indonesian slaughter of their island neighbor. Indonesia subsequently allowed international oil companies to exploit the oil of East Timor. A commission of Australia's parliament labeled the massacres following the 1975 Indonesian invasion as "indiscriminate killing on a scale unprecedented in post-Word War ll history." Carter is thus complicit in genocide; he is, in fact, a mass murderer.

Jimmy the Naïve was also no saint when it came to other aspects of his foreign policy. He was instrumental in the murderous terrorism of the Anastasio Somoza dictatorship, which he backed, of Nicaragua while in the White House. And Carter abetted the Pol Pot regime of Cambodia and thereby is an accomplice to that government's genocidal atrocities and war crimes. Finally, the war criminal from Plains supported the brutal, torturing, murdering, death-squad employer the Shah of Iran; the CIA directed the Shah's secret police and their horrid crimes against humanity. One might note the duplicitous character of Carter in that he revealed in a 1976 Playboy interview that he considered committing adultery; this fact is fully in line with his character as analyzed by Dr. Bellak. James Earl Carter is hereby shown to be a war criminal, by any standards-not just according to the ex post facto findings at Nuremberg-and a mass murderer guilty of high crimes against humanity.

In his career as a roving diplomat and peace negotiator, Carter displayed heinous duplicity, saying one thing in his ballyhoo press relations and doing quite other things, such as aiding brutal dictators, making countries safe for corporate investment, supporting undemocratic, rightist regimes and countenancing voter fraud. In 1991, scholar James Petras, after examining Carter's "human rights campaign," found that the former president was "a hard-nosed defender of oppressive state apparatuses, a willing consort to electoral frauds, an accomplice to U.S. Embassy efforts to abort popular democratic outcomes and a one-sided mediator."

In the Dominican Republic in 1990, Carter helped President Joaquin Balaguer steal the election. In Haiti in 1990 the "impartial mediator" worked to defeat Jean-Bertrand Aristide and rejected the factual idea that Haiti's army was brutally repressive. Marx said that history constantly repeats itself, first as tragedy and then as farce. In the case of Carter and Haiti, the farce occurred when the wife of a Haitian army officer-involved in getting the aged diplomat-at-large "on board" and return to Haiti-was, as he told a journalist about the woman, singled out by him as "impressive, powerful and forceful. And attractive. She was slim and very attractive."

Author's note: (For this article I owe an academic debt of gratitude to Michael Parenti's book Inventing Reality, 1993; the article of Gordon Smith, "Jimmy Carter's No Real Humanitarian," 1997  [on the web site The Prism]; the article of Noam Chomsky, "If the Nuremberg Laws Were Applied...", 1990 [Chomsky.Info]; Jeff Cohen and Norman Solomon, "Jimmy Carter and Human Rights: Behind the Media Myth," 1994, FAIR; and American-Latin-American scholar and author James Petras, passim [he is the author of about 71 books].)

John Fleming is the author of Word Power: A Dictionary of Fascinating and Learned Words and Phrases for Vocabulary Enrichment, which may be bough for as little as $8 (includes shipping) in used good-condition or $18 for a new copy; see the Internet discounters listed at Amazon.com. The author can be contacted at: [email protected]