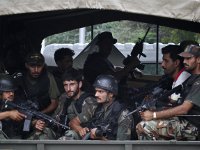 Islam lays stress on fair dealings in financial matters, but Pakistanis-especially the influential ones- seem to have lost this part of Islam. But this has not always been like this: in our Archives we can find the papers of M.A.Jinnah, the Founder of Pakistan who was meticulously correct in money matters and he himself wrote expenditure details on even small expenditures like postage fees and other household needs in his own hand and signed it. Today plundering of public money has reached the status of normality not only in state affairs but in all offices.

The boss uses the office naib-qasid (peon) to clean his private house; he uses the office car and driver to pick and drop children and take the wife shopping. While these seem to be small things this is a wrong impression - from here starts the misuse of position at much larger scale. Pakistani rulers and senior bureaucrats now don't even write in their own hand writings specific orders on official files, they attach a chit on file with their orders written with pencil, to be typed on his/her behalf to be signed as orders by Principal Secretaries or others, this shows weakness of character in a leader and power of bureaucratic mafia.

There are so many examples of political figures misuse of power being hand-in glove with bureaucrats, the ephedrine case being one of the recent. While Privatization of state silver, IPP's and Rental power projects have sealed the fate of economic development and national prosperity. Making money by abusing rules and regulations and disregarding national interest - and health care and control of drug abuse is national interest- has become a minor affair and is being pushed under the carpet. No body is concerned over the spiral rise in cost of daily essential items, which is snatching two square meals from the poverty stricken people. While the Prime Minister is declaring to raise minimum wages to Rs. 8,000/- the Chief Minister in Punjab province has declared it as Rs. 9,000/-, which according to price index evaluation is still not sufficient to make workers both ends meet.

Accountability is another victim of this approach. It has been reduced to an instrument to keep allies in line and fight political enemies. The ideas of right and wrong have been separated from what Islam teaches; these days might is right only and the boss decides about right and wrong. And the problem is not only present in politics or in running of state affairs or institutions; it has crept into private business and into family lives also. Children grow up and first thing they learn in early age is that lying is no problem everybody including mummy and daddy does it. How do they know? The phone rings and the father (or mother) tells the servant to say 'sahib is sleeping'. There are a thousand other examples inside the privacy of homes where the first steps for ruining and suppressing the natural gift of God to every human - to know right and wrong- are taken. This is perpetuated in school and college where lying and cheating is daily practice mostly covered up by the teachers and administration. How can we expect children grown up in such surroundings to be true, honest and upright?

And this brings us to the most important question: How can we address the problem of missing morality in our society? Only by addressing and solving it at this broad and basic level we will be able to address the problem of corruption, misuse of power, plundering of public wealth in all spheres of public and private life in Pakistan. There is no easy answer to this. And keeping in mind that it took a long time, several generations to erode morality to this point, it will clearly take as much time to pull back and restore the feeling of right and wrong in the minds and deeds of Pakistanis. I think the beginning has to be made by an honest and open discussion. Admitting a mistake is the first step to eradication.

There is a need to activate for all of us our inner consciousness and be brave enough to act accordingly even if this brings disadvantage to us. My experience tells that in most cases people know that they are doing something wrong when they are doing it, because they know they can just suppress the knowledge and would never admit it. I firmly believe that knowing right and wrong intuitively is God's gift to humans but this gift has to be guarded and developed and applied to our daily lives. Religion could play an important role and imams and religious scholars could contribute to it - if they are honest and apply the same rules to themselves as to others. Islam is very clear on economic and financial discipline, Interest is forbidden then what is the Islamic Banking growing fast by these foreign banks in Muslim countries, and why no scholar has ever thrown light on this issue, and it seems they have also compromised on it.

Print and electronic media could have played a positive role but intellectual corruption spreading everywhere has not spared (our) this branch in society and business interest first has become their hallmark. A news becomes news only if it sells. Our politicians have forgotten that politics has taken its roots from civics, known as Shehriyet a subject which was taught in our schools and colleges and was then enlarged as political science, which was developing living character and responsibility in our youth and grown-ups. Now this is not visible any more.

Print media policy appears to be regulated and governed at the whims of multinational and strong advertising groups interest. While in electronic media some are openly telecasting foreign channels' recorded programmes, others show US sponsored advertisement in between the peak hour telecast. Publicity campaigns not only overshadow the viewers understanding process some are dominated with neighbouring countries actresses for promotion in sales of consumer items. Thereby promoting Indian & Western culture to allure our youth and adults, a fact that is destroying our national fabric, and creates the present chaos all around. Time is running against us, an already divided nation is being further divided in the name of additional provinces resolutions without any sincerity to the cause, just for political wrangling and point scoring. How long this will continue with all impunity. The nation has now pinned hope in a Messiah to drive this rudderless ship out of the present morass. God bless Pakistan.