The 9th of May 1945 -- The Union of Soviet Socialist Republics had roared into Berlin, defeating the worst scourge the world had ever seen up until that time.  Fascism was defeated. 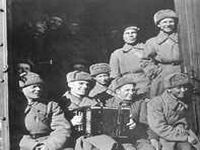 This victory was achieved with the most tremendous of human sacrifices. Almost twenty-seven million Soviet men and women gave their lives selflessly fighting the fascist tyranny unleashed by the German Nazi war machine across the European continent and beyond.

The Soviet Union was at the zenith of its power and prestige.  A backward, medieval nation had been transformed into a world power in record time with countless victories yet to come in social progress and technology.

Eight of every ten German soldiers were killed on the Eastern front in epic battles on Soviet territory, the infamous Stalingrad and Kursk battles for example, that were the turning points in the direction of the war.  The crushing defeat at Stalingrad was unmatched in scale, spurring the Soviet drive towards victory... In May 1945 Berlin finally fell.

The mass industrialisation programme launched by Stalin gave the country the capacity to produce more tanks than the rest of Europe combined. Factories were moved eastward, producing war materials 24 hours a day, seven days a week.

Even after losing around half its industry in battles, the USSR was, by 1942, producing over five times more tanks than Germany. Furthermore, the industrial model adopted in the Soviet Union was one in which civilian plants were easily adaptable for military production. 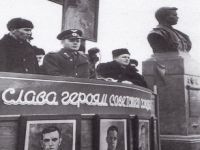 Leningrad's horrific siege was one of the most lethal in world history.  The siege (blockade) of Leningrad lasted for 900 days, from September 8, 1941 until January 27, 1944. Almost 3 million civilians, including about 400,000 children, refused to surrender to German butchery and endured extreme hardships in the totally encircled city.

Food and fuel were in extremely short supply, public transport was not operating and by the winter of 1941-42 there was no heating, no water, almost no electricity. Food was very scarce and people were starving to death.

It is estimated that during the siege that 641,000-800,000 people died. Most of them were buried in mass graves, the majority in the Piskariovskoye Memorial Cemetery, an imposing, quiet holy resting place to over 500,000 people and a timeless, haunting reminder of the heroic deeds of that hero city.

Few in the west have the proper appreciation for the Soviet war effort. However, they cannot detract from the reality. In the final battle alone, Soviet casualties were three hundred thousand, with seventy-five thousand killed in action. 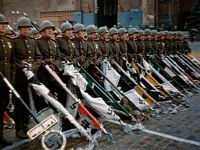 One of the reasons the west has descended into fascism is its failure to appreciate the circumstances of its liberation and freedom.  Thus, we have had the endless stream of imperialist wars conducted in a manner that Hitler and his henchmen would have been proud of, with the exception of the fact that while executed under a mask of Goebbels style lies, none of them have been conclusively won and can only end badly.  Actually, in my opinion, Hitler and the west are just two sides of the same coin.  The lack of a multipolar system for so long has totally unmasked the west.

On this 67th Anniversary, we honor and venerate the war heroes of the Soviet Union to whom we are forever indebted.  It is with both sadness and pride that we remember these heroes.  The best tribute to them is to be dedicated to the ideals they fought for.

We find ourselves again faced with the same evil forces of fascism wreaking death, havoc and destruction in various places. Hopefully, these forces will be turned back and defeated by...the children, grandchildren and great grandchilren of that great generation of selfless, courageous heroes.