Libya: Why the silence?

Just before the FUKUS-Axis countries set up camp in Benghazi on the eve of the love affair with the NTC terrorists which they unleashed on Libyan society, raping, murdering, torturing and pillaging, destroying the country in a wanton demonstration of demonic and sheer evil, the media was full of stories about Libya. Today, why the silence? 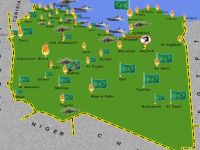 I spent a great deal of time and energy in this column showing up the media nonsense about Libya for what it was: hype, nonsense and lies, once again trying to whitewash another of the FUKUS-Axis' (France-US-UK) campaigns, to justify yet another of its imperialistic sprees as the energy, banking, arms and Telecoms lobbies this time persuaded the governments they control to come up with a good cover story to stop Muammar Gaddafi implementing too many humanitarian projects in Africa, which damaged their greedy interests.

What happened next, everyone knows: despite the UN Resolutions forbidding it, the FUKUS-Axis indeed had boots on the ground, special forces directing the terrorists and mercenaries they controlled, sending them into action to behead Negroes, to decapitate people, to rape girls, to slice the breasts off women, to commit arson, destruction of property, torture and murder. Liable for these acts the FUKUS-Axis is, and indictments have been sent to the ICC at The Hague and the ECHR, neither of which have even received the courtesy of a reply, but then again, who expected one?

And then? Remember the promises of elections? A nice, democratic western-style democracy, where, you know, politicians basically do what they want behind closed doors and pander to the whims of their true masters, the lobbies who pull their strings...

So where is this election? Let us have a look inside Libya and see what is happening. Maybe we shall find the reasons explaining the silence of those responsible.

The United Nations declares it is horrified at acts of torture in Libyan jails by the freedom fighters the FUKUS-Axis backed. Nothing particularly new there. After all there are countries which, apart from torture, actually execute people in jail, the USA being one of them, there are countries which perpetrate the most shocking and barbaric acts of torture in concentration camps they rule overseas. Heard of Abu Ghraib or Guantanamo Bay anyone?

That can't be it.

Neither could it be the secret detention centre where the FUKUS-backed "freedom fighters" are apparently gang-raping women and girls and perpetrating Medieval-style practices of torture against men and boys. After all, this would never happen under NATO's nose, now, would it?

Could it be the next story, the increasing fights ongoing between loyal Jamahiriya forces and terrorists? Interesting, why don't we read about these stories in the western press, isn't everything supposed to be hunky-dory in Libya?

Increasing fighting in north-west Libya has come to the attention of the UNO, which now calls on all parties to "resolve their differences without resort to the use of force". Just a moment, that is exactly what the Jamahiriya was saying before the FUKUS-Axis started using terrorists on its own proscribed lists (Ask William Hague of the UK's Commonwealth and Foreign Office), about the same time it was proposing a free and fair democratic election which the FUKUS-Axis refused to allow.

And why the north-west? For a good reason. Basically because the south of the country is out of control of the so-called "authorities" (how can terrorists be "authorities" and who has elected them?).

Indeed, this is the reason for the silence: Libya has collapsed in utter chaos, just as I predicted it would a year ago. Fighting is not confined to the south and north-west as the UNO states. Recently, terrorist forces from Souq Jumaa and Misurata were confronted inside Tripoli and liquidated by loyalist Green Resistance forces. Last week a further 7 terrorists were destroyed in Zliten and another 22 were injured.

In fact, a look at the real map of Libya will show there is fighting in all cities right along Libya's huge coastline, it will show that if you draw a line from east to west from As Sarir half-way down Libya on the Egyptian side to Ghadamis one-third of the way down on the Tunisian frontier, the vast majority of the territory is Green.

North of this line, there is fighting in practically every city, many of which are mainly held by loyalist Green Resistance Forces.

The reason, ladies and gentlemen, why the western media is not speaking about Libya is perfectly simple. Their terrorists are getting whipped.