The Israeli Question under analysis: Holocaust versus Porajmos

For hundreds of years the Roma population had wandered from community to community, ostracised, derided and scorned not because it ever wielded power, not because it ever occupied positions of authority in disproportionate measures but because it lived beside society, marginalized. Yet after the holocaust, who claimed they should go back to India? 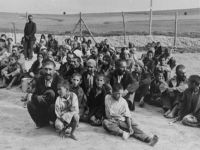 For the Roma (gypsy) people, the holocaust is called the Porajmos. Due to the extreme complexity in drawing up figures for the Porajmos (devouring) and due to the fact that the Roma community did not have sophisticated methods of registering and counting at their disposal, the total number of Roma murdered in the Nazi years is estimated to have been between 220,000 and 1.5 million - a huge difference, compared with the constant figure of 6 million Jews estimated for the same period. Could the Roma Porajmos have been as large as the Jewish holocaust?

This does not mean the holocaust did not exist

Concentration camps existed in Romania in 1932, a year before Hitler came to power. How many gypsies were crammed into them?A large part of the historiographical records have been concentrated on Jews and not on other groups which suffered the same fate. This does not mean the Holocaust did not exist; however, it does insinuate that the Porajmos could have been underestimated. The question is further complicated by the debate, even among the Jews, as to what or who a Jew is. Who counted, then, in the holocaust? And who did not count in the Porajmos?

Why did nobody remember, in 1945, to state that the Roma had been raped, murdered, disembowelled, forced into trains, tortured, held in deplorable conditions and branded Untermenschen (sub-Humans), that millions of them had been slaughtered by Fascists, and why did nobody then remember to carve out a swathe of Northern India (from where they came hundreds, not thousands of years before) and declare it a Roma homeland?

The Porajmos was the Gypsy equivalent of the Jewish holocaust. Period. Were millions of Indians moved out of their homes to accommodate them? Let us in future not insult the collective memory and identity of peoples by concentrating on some and excluding others.