Save France from the CIA, MOSSAD and Al Qaeda! 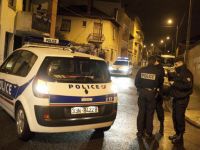 One month before the presidential elections, France had its newest sensation, a western cowboy style film with the headline "greatest manhunt in history," showing Nicolas Sarkozy's tragically pale face with tightly shut lips and wrinkled forehead, worrying about the future of France.

His polls were down low lately because French voters judged his political performance as bad, worse, worst. So Sarkozy hung on to his cowboy film with the "greatest manhunt in history" script like a dead fly to the window grid. The blown-up story was his last hope of winning voters and augmenting his chance in the upcoming elections.

France is home to the largest Jewish community in Europe. Around 700,000 Jews reside in the country. The story of the shooting at a Jewish school came in handy for Sarkozy, but many French people have their doubts.

The online media, Alterinfo, brought several articles, asking about the truth of the story.

There was a lot of bang-boom, patati and patata around the building, with a whole squadron of RAID police running around the block day and night, police cars with sirens screeching, colorful carnival fireworks, plenty of press people and dumbfounded lookers-on.

But were the three Jewish school children really shot dead? If so, then why did their bodies not undergo autopsy, as is required by criminal law in France? The official information given was that after Jewish ritual, the burials had to take place within 48 hours.

Some readers in their comments on Alterinfo mused about the absence of dead bodies. Could it be that those allegedly shot children were in reality whisked away to Israel?  People know that Jews do not kill other Jews. They believe that this "shooting" was a MOSSAD hoax to enhance their buddy Sarkozy's chances in the election. It seems to be some sort of false flag operation, with dark forces trying to instill fear in French citizens.

If the alleged killer of the French Muslim parachutists in Montauban and the French Jewish children in Toulouse really belonged to the Al Qaeda network, then French voters have every right to ask Sarkozy why he supports Al Qaeda terrorists in Libya and in Syria, where French secret services are currently arming and training these terrorists to topple Bashar al-Assad's government.

Sarkozy's protection and support of Al Qaeda in Libya and Syria is like an invitation of Al Qaeda to France. The chickens always come home to roost.

The French people also asked why the "massive manhunt" was drawn-out so long, with endless reports, features, interviews and TV talk shows, before the young Frenchman of Algerian origin was finally liquidated by RAID policemen in his tiny apartment of 38 square metres.

Are the French police so incompetent that they are unable to capture a killer faster than that?

In Afghanistan, Libya and Syria, the French soldiers and secret service men work much faster, killing hundreds, even thousands of innocent people in the spur of a few minutes.

It was pathetic how Sarkozy's wrinkled face was shown again and again, keeping "a minute of silence" for the victims in France, because he is the one who produces non-stop victims in Afghanistan, Libya and Syria by sending French killers to these Muslim countries in order to silently genocide their populations.

According to Gavin Hewitt of BBC, Mohammed Merah (23) was trained and handled by the French secret service DCRI.  He had a passport with an entry stamp for Israel. What did this young Muslim do in Israel?

He also had the direct phone line number of a French secret service agent of DCRI, who probably was his personal handler and trainer. What did they talk about on the telephone?

Mohammed Merah was obviously on best terms with the French secret services before they decided to set him up and annihilate him.

Was he a sort of stupid little patsy, an Algerian sheep in the wool of a French wolf?

Formerly, he had allegedly received his training in the CIA base of Bagram in Afghanistan by the secret service organization DCHC.

The Pentagon and the CIA are known to specialize in the creation of Al Qaeda terrorists for world-wide use.

Since the times of entry into NATO, France seems to have degenerated into some sort of banana republic, with growing state debt, unemployment and a president who is involved in shady business, to put it mildly.

The times of such noble patriots as General Charles de Gaulle are long gone, alas.  Let's hope that France will find a new president soon, one who truly has French blood and honor in his veins, one who does not resort to all kinds of crooked shenanigans and endangers his citizens' lives in order to remain in power.

The French will not forget the latest coup d'état with which Sarkozy, together with his best friends from the CIA, MOSSAD and Al Qaeda, tried to pull the wool over his voters' eyes.

It is high time for him to leave France in peace.